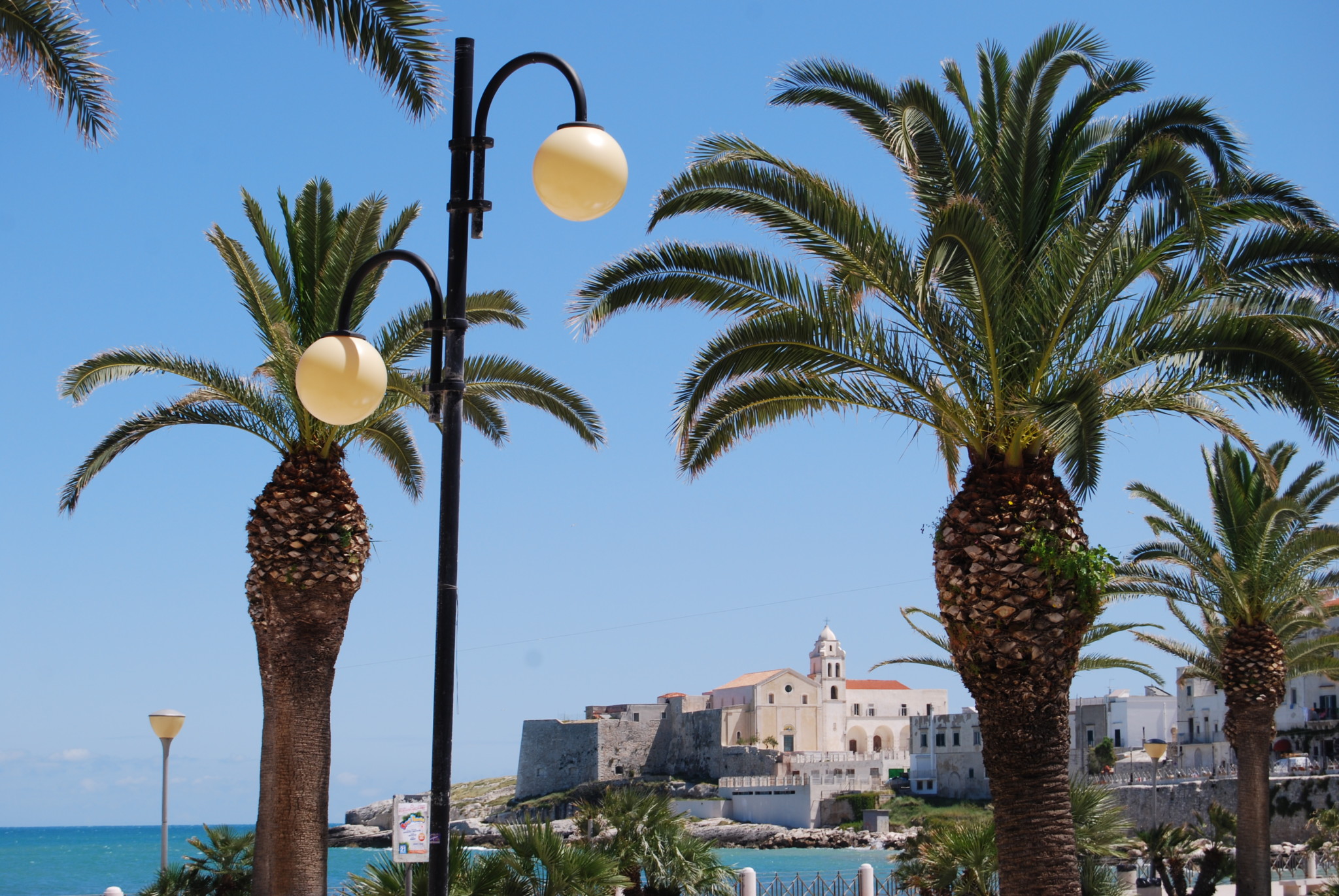 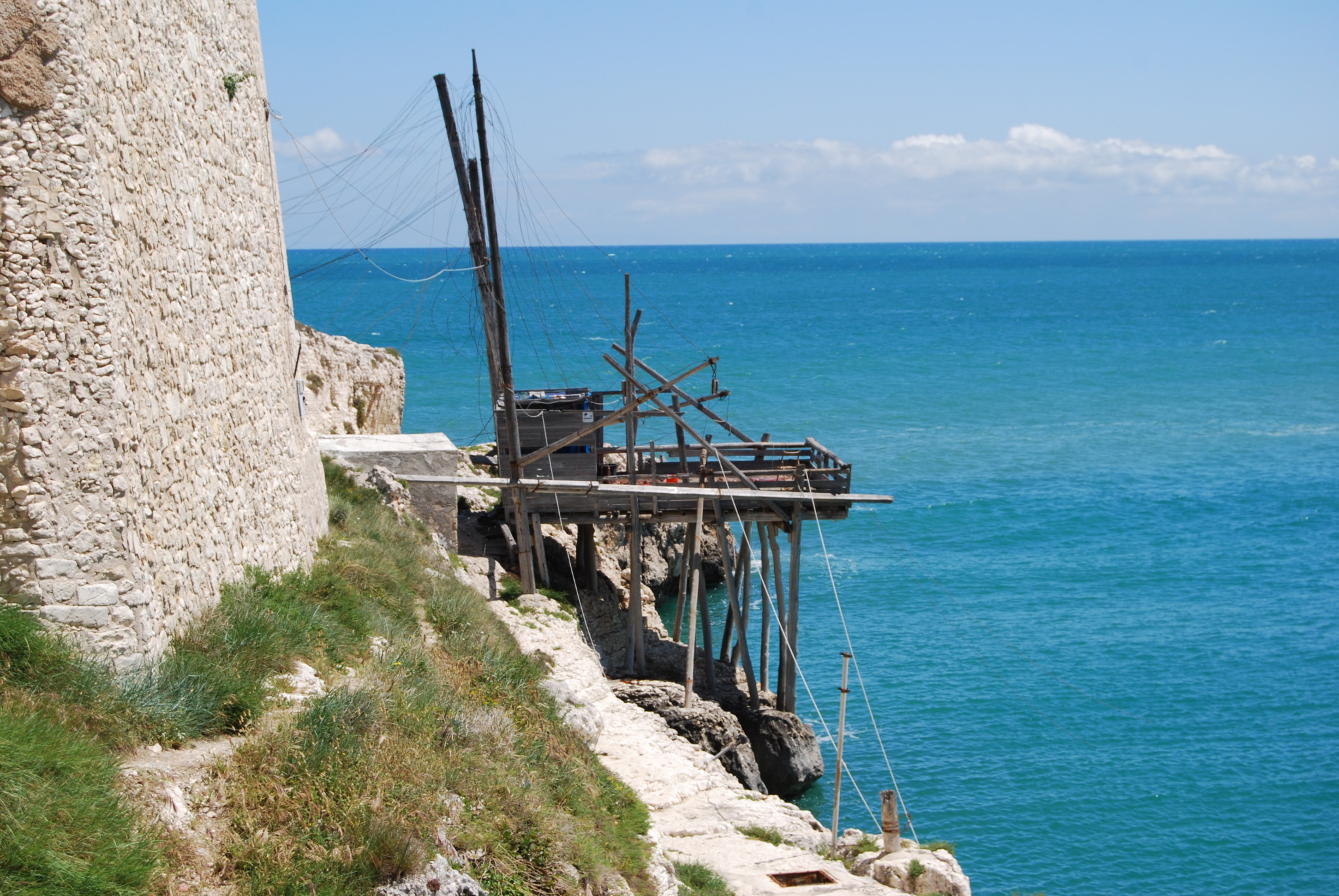 Vieste is at the eastern end of the peninsula. It is the largest town in the Gargano, with a population of about 14,000. Its centro storico is on a headland overlooking the nearby harbour and beach areas, but although it has a distinctive character this older part of the city is close to and well integrated with the more modern central area.

The name is thought to be because of early associations with the Roman goddess Vesta. The town was principally established by the Normans in the 11th century. It later became a stronghold of the Svevo (Swabian) emperor Frederck II, and subsequently came under the rule of the Angevins and Aragonese. The 15th and 16th centuries were dominated by attacks from the marauding Turkish forces. In 1646 there was a major earthquake which affected most of the key buildings of Vieste. A period of repressive Spanish rule was followed from 1737 by the Bourbon dynasty, during which Vieste flourished as a centre of agriculture, fishing and general cultural activity (Lorenzo Fazzini, after whom the main street is named, was a famous mathematician and intellectual in this period of enlightenment).  Vieste was only tangentially affected by the events of the nineteenth and early twentieth centuries. It emerged into the post World War II period as a rather deprived outpost of the Italian "mezzogorno". This situation was dramatically reversed by the emergence of tourism as a major local industry and source of prosperity. A specific aspect of this was the construction by a visiting entrepreneur, Enrico Mattei, of one of Europe's first modern holiday complexes, at Pugnochiuso on the coast a short distance south of Vieste.

So today Vieste, with its sandy coves and access to the wooded interior of Gargano, has become a major tourist destination - with good quality camping and caravan sites, hotels, holiday villages etc. Road improvements have made it much more accessible than in the past. The city is a smart, well kept, relatively "up market" place, popular with Italian and foreign celebrities. The centre is lively and bustling, especially in the evening; packed in summer, holiday periods and festivals, it is also quite busy for most of the year.

The beaches with the best reputation (Baia di San Felice, Baia di Campi) are south of Vieste. There are places where there is public access to the sea, but, as in the rest of Italy, during the May to September period you may choose to pay at a lido, where for 6-15  euros a day you get a spot with sunbeds and an umbrella, can hire beach equipment and use on site bars and restaurants. During high season many of the lido spots are booked solid and you will probably have to get there early or make an advance reservation. Also car parking can be tricky along the coast in the busy summer months.

Vieste's most famous special feature is a rock called Pizzomunno, which is on Castello beach, a beautiful beach immediately south of the central area, overlooked by the centro storico.

The rock is most impressive from the beach itself, close up. It is associated with an interesting legend. A young fisherman called Pizzomunno loved Cristalda, a local girl with long beautiful hair.  While out fishing, the sirens (sea goddesses) tried to seduce Pizzomunno with their singing, promising him great riches and everlasting life; but without success, he remained always faithful to Cristalda. However, one night while Pizzomunno and Cristalda were on the seashore, the sirens seized her and took her to the bottom of the sea. Pizzomunno tried desperately to save her, but failed; and in his pain and grief he changed into the rock tower that is there to this day. It is said that every hundred years, Cristalda returns from the sea and the lovers are re-united for one night - but nobody has witnessed this so far.

The bustling heart of Vieste is Corso Lorenzo Fazzini, which joins the attractive Giardinoi Pubblici and the seafront promenades around Piazza Kennedy - a five minute walk between them. A feature of the street is the crisp cream coloured Chiesa di Santa Croce. On one side of the Corso the streets slope upwards, most of them stepped, into the centro storico.(although this can also be reached without steps via a sloping street paralleling the Corso, Via Cesare Battista).

There is a tourist information office on Piazza Kennedy, open Monday to Saturday 8.00am until 2.00pm in the morning and 2.00pm until 8.00pm in the afternoon (that's what it says on the door!).

From the seafront promenade on the left beyond the piazza there is a good view of Il Faro, Vieste's lighthouse, on the nearby Isola Sant' Euphemia. The lighthouse was built in 1867 and sits on top of a building which in the past housed the lighthouse keepers (fanalista). The island is now uninhabited, the light is operated automatically. In 1987 a cave was discovered on the island containing 200 inscriptions in Greek and Latin dating from about the 3rd century BC.

This part of the seafront is separated by a small headland from the large port and marina area, providing berths for numerous sailing and motor yachts and occasional cruise ships. This is also the base for two hour boat trips to view the coastal grottoes, and day long boat trips to the Isole Tremiti (if you want to visit the islands, a better bet is to go from Peschici or Rodi which are much nearer).

Don't miss a walk from Piazza Kennedy along Via Pola as far as the Chiesa San Francesco with its spectacular position on cliffs at the edge of the sea.  An original church on this site was destroyed in the wars against the Turks, but from 1546 a new church and convent was developed by the Franciscans, who rebuilt it after the massive earthquake of 1646. It has been renovated many times, most recently 2000-2012, and is the base for various religious processions and celebrations in Vieste. Just beyond the church is a trabucco (traditional wooden fishing platform); you are advised not to descend to this because the path is dangerous, but you can see it clearly (also other trabucchi at the bottom of the cliffs under the centro storico and in the port area).

There is a particularly beautiful walkway from the church, looking down to the sea and up to the centro storico. This path leads into the centro storico, where you can walk up through narrow streets to the Castello,  a triangular fortress on top of the headland, another construction of Frederick II. It is a military establishment, closed to the public, although we have seen reference to guided tours in the evenings and it is used as the venue for special events. Unlike many similar castles in Puglia it is difficult to see much of its substantial exterior. The castle was damaged by shells from an Austrian warship on 24 May 1915, the day Italy entered the war.

Just below Il Castello, La Cattedrale di Santa Maria Assunta occupies a sloping site in the heart of the centro storico, just rising out of the streets, no imposing piazza in front. Originally built in the XI century, it is one of the oldest Romanesque churches in Puglia, but has been extensively modified and maintained over the years, with the addition of a Baroque style bell tower in 1772 (the original tower collapsed).  It is well looked after to this day. Inside is a XVI century wooden sculpture Santa Maria di Merino, one of the two patron saints of Vieste - the statue was supposedly found by fishermen on a beach, followed by an argument (won by Vieste) as to whether it should come here or to Peschici.  Access to La Cattedrale involves a flight of steps in front of the entrance; it is closed from midday until 4.00pm. (Note - there is a stylish bar in an old building just across the narrow street from the entrance, which is open at lunchtime!).

Near La Cattedrale is the Chianca Amara (Sour Stone) which commemorates the sack of Vieste by the Turks in July 1554; some 5000 people were reputedly beheaded at this spot, mainly women, children and older people who could not be taken into slavery. Several coastal towns in Puglia (most famously Otranto) suffered similar atrocities, but this one seems to have been the most excessive.

On Via Pola, between Piazzale Kennedy and La Chiesa di San Francesco, is Vieste's famous Museo Malacologico, devoted to seashells - over 14,000 specimens from all over the world.  The museum is free (it is a private enterprise, and depends on sales and sponsorship). It is open April - September, when opening hours are 9.30am-12.30pm and 4.00pm-to 8.00pm, later still in the peak months, midnight in August.

There is no shortage of places to eat and drink in the town and the nearby beach resorts.

Vieste is an interesting place to visit, and if you want a beach based trip, this is likely to be your best option in the Gargano. It is easy enough to reach by road (under 3 hours from Bari), and there are places to park in and around the centre and in the beach areas, although they get full in summer. Roads throughout the Gargano are tortuous, so be ready to take your time.

It is also easy to reach by public transport. Buses run every couple of hours (less frequently on Sundays) between San Severo and Vieste - they call in at Peschici, the trip takes a couple of hours (about 30 minutes just from Peschici). This route can be covered by a combination of train and bus using the local railway run by Ferrovie del Gargano, which runs direct from Foggia, through San Severo to San Nicandra, Rodi and Peschici, a scenic route much of it overlooking the lagoons along the north cast of the Gargano.  The terminus of the railway is about four kilometres short of Pechici itself, at Peschici Calanella; buses to Vieste call in at this station and can be joined there or in Peschici. (NB Although the bus services and the train services in this area are all operated by Ferrovie del Gargano, you will need separate tickets for the bus and the train - these can be bought at the same time from any of the station ticket offices, bars or tabacchini which sell tickets). 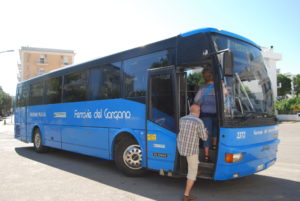 A SITA bus service connects Foggia and Vieste via Manfredonia. This travels on the twisting road along and above the coast between Manfredonia and Vieste, fantastic views and interest throughout - the whole trip takes about two and a half hours from Foggia.

SITA and FdG buses start from and arrive in Vieste at Piazzale Aldo Moro - a straight 10-15 minute walk along Via Papa Giovanni XXIII takes you from Piazzale Aldo Moro to the Giardini Pubblici and Corso Lorenzo Fazzini. Bus tickets for FdG can be bought at the Bar Aldo Moro; but although the SITA website says the bar also sells their tickets, we found this not to be the case, you have to get these from a bar about 300 metres along Via Papa Giovanni XXIII which now seems to have the SITA concession.