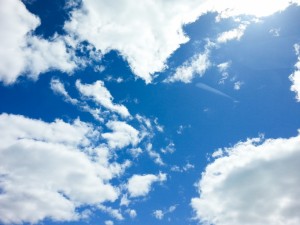 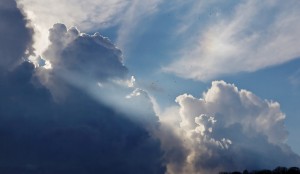 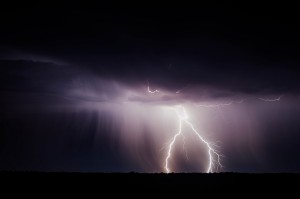 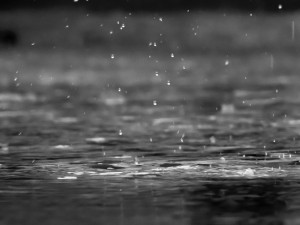 Being at the southern end of the Italian peninsula means that Puglia benefits from a Mediterranean climate, with the signs of spring showing early, building up to the long, hot, dry summer. Autumn is usually very mild, and often has the feel of a second spring with the rain bringing fresh life to the landscape after the summer months have scorched the earth. Winter can be wet and with the odd cold period, but is relatively short in comparison with more northerly parts of Europe and snow is a rarity.

The size and geography of the region mean that the weather patterns can vary significantly, for example between the coastal plains and the inland hilly areas – the below data shows the weather averages for the Brindisi area: 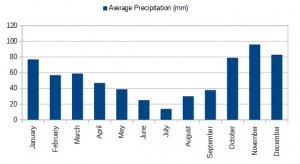 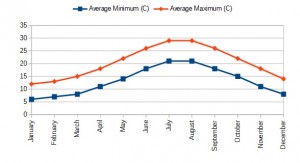 Below are some month by month personal experiences of the weather in Puglia. But please note we can't guarantee any kind of weather, good or bad, at any time of year!

January is a pretty wet month by Puglian standards, with several days of consistent rainfall and temperature struggling to get into double figures and often dropping towards zero but rarely below. These rainy periods are mixed in with periods of sunny weather, and when the sun is out it is incredibly pleasant, with temperatures often getting above 15 degrees.

The rainfall starts to drop off moving from January into February, but the fluctuations between wet periods and pleasant sunny spells continue. In our first year living in Italy it was around mid-February that it really felt like Spring had arrived, and was even the first time that the swimming pool at Trullo Annunziata was used...although moments after entering the water the foolishness of this decision was clear for all to see, and certainly won't be repeated!

The trends from February continue into March, with temperatures remaining in the mid-teens for the majority of the month. Whilst still chilly in the evening, it is certainly warm enough during the day to wear shorts – although expect to be stared at with disbelief by the locals who are still steadfastly wrapped up in winter coats, scarves and hats. Periods of clouds and rain are still expected but becoming fewer and further between.

As can be seen from the charts, average rainfall starts heading down to summer levels during April, and temperatures are edging up towards the 20s. In our experience of April there have been periods of drizzly rain and mist, although when it clears up the temperature is more than comfortable and a sign of the summer heat around the corner. Our first full month of April living in Italy didn't see a single drop of rain, but this certainly won't be guaranteed every year.

The month of May is when things really start to get going weather wise – temperatures well into the 30s are not unusual, but not the norm, which is around the mid-20s. May is also when the locals start to shed their winter-wear and submit to their summer wardrobes, although don't be surprised if you still see mothers insisting their young children wear coats and hats despite the temperatures being well into the 30s!

Similar to September, June tends to be a bit of a transitional month before the consistently dry and hot months of July and August begin. Temperatures are likely to get into the 30s, but there are often thunderstorms as the battle between the hot and cold air cause a changeable weather system. It can be hot and dry for long periods, but there is also the chance of wetter/cloudier weather for a number of days in a row.

The heat really kicks in during July, a constant reminder that you are in one of the most southern parts of Europe. 30 degrees plus is more or less standard on a daily basis and can reach into the 40s. July is on average the month with the least likelihood of rain, although living in this climate you start to forget what rain is at this time of year!

The month of August is invariably another scorcher, with more or less guaranteed sunshine all day long. There is the chance of the occasional thunderstorm, although this is often restricted to being out at sea, providing some incredible light shows whilst remaining perfectly dry. Temperatures can reach 40+ degrees for a consistent number of days, so keeping well-hydrated and out of the sunshine is essential.

Whilst the temperature often remains remarkably warm in comparison to the UK (mid to high 20s and often into the 30s) there are often dramatic thunderstorms which bring with them significant downpours of rain. This gives life back to the mainly brown landscape and a sort of 'second Spring' begins, with a multitude of green re-emerging from the ground. As soon as the storms pass normal service is resumed and it is often a very pleasant temperature.

October is similar to September in that the weather is interchangeable between heavy rainfall during storms, to extended periods of dry and sunny days. The temperature does start to drop off and although evenings sat outside are still perfectly feasible, it may be time to dig out a jumper or cardigan for the chillier evenings.

November is on average the wettest month of the year, and in our experience this has been the case, with long periods of rain. However, temperatures are still fairly comfortable, although it is definitely time to put away the outside furniture and retreat into the comforts of a heated house for dining towards the end of November. When the sun is out temperatures can reach into the 20s but this is the exception rather than the rule.

We first stayed in our Italian 'house' at the beginning of December and it was...horrendously cold! Saying that, it was essentially an old storage building with no heating or insulation of any kind so not too surprising! Temperatures get close to freezing on occasion, but there are rarely frosts as there are in the UK. With central heating or a log burner it is quite easy to get comfortable. Our first New Years Eve in Puglia saw about 30cm of snow fall in 24 hours, but we are assured this is pretty rare!