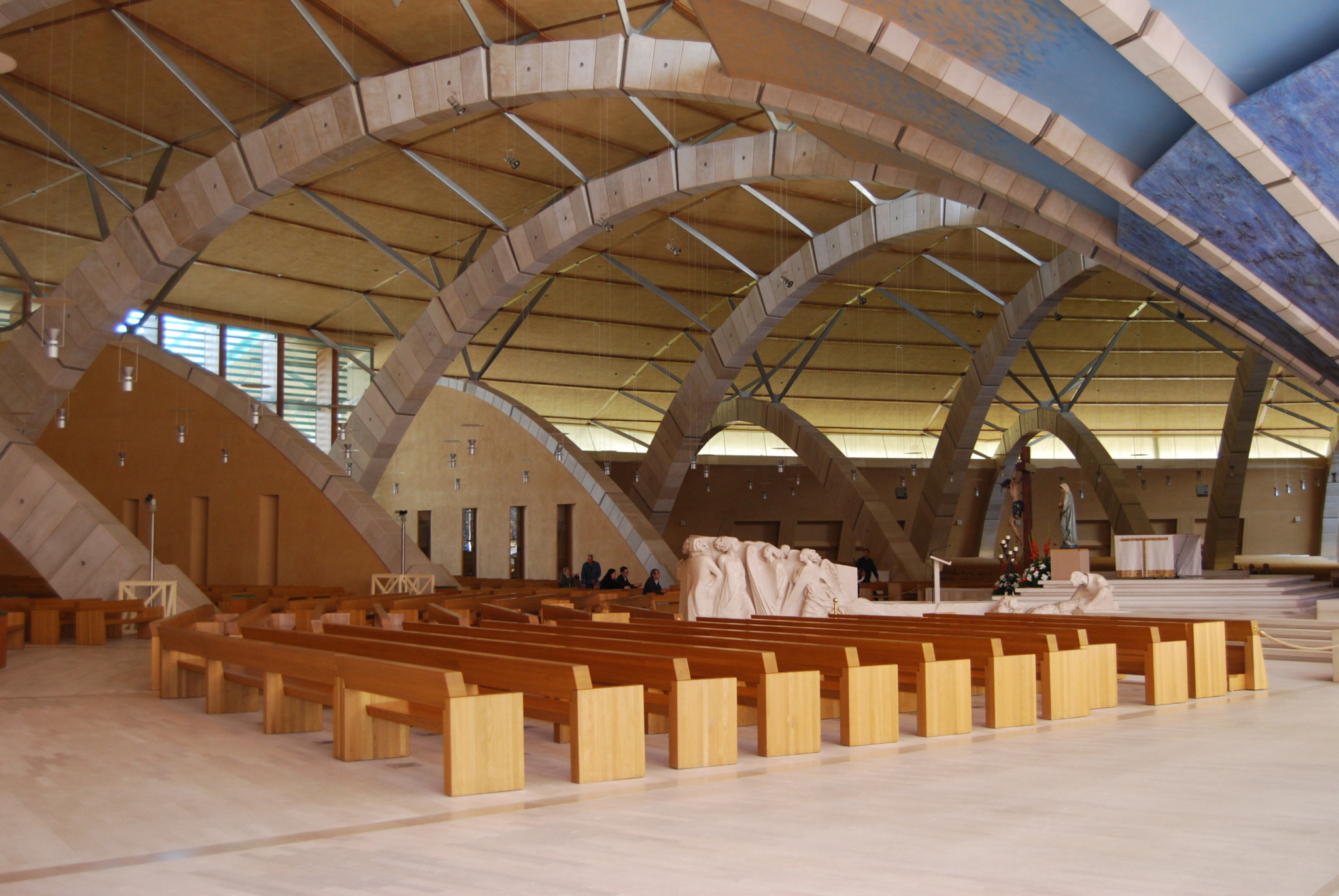 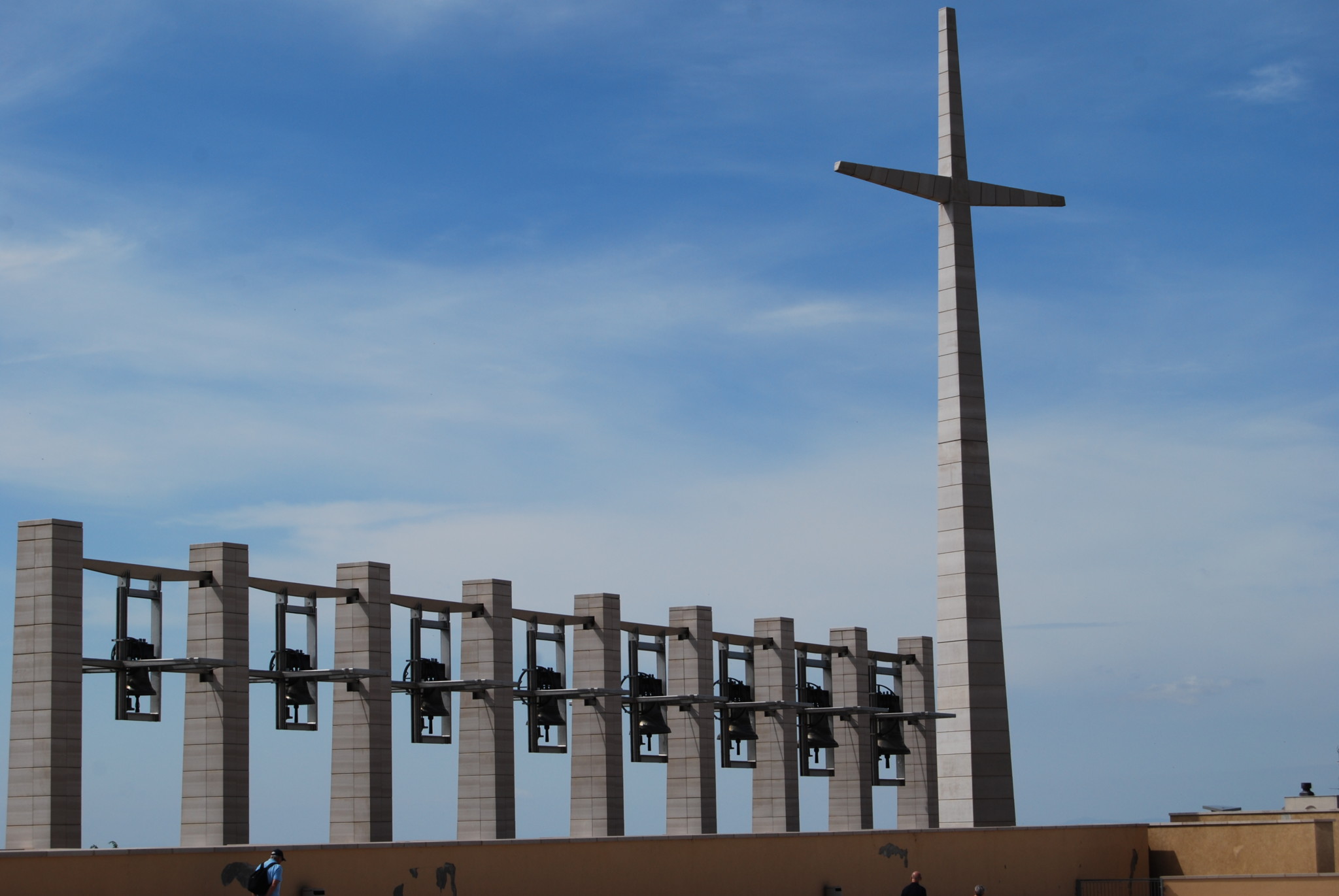 San Giovanni Rotondo is quite a large town (population 27,000) high up in the Gargano mountains. It  takes its name from the Rotonda di San Giovanni, an old building on the edge of the centro storico. However, it is best known as the location of a one of the two main Christian pilgrimage destinations in the Gargano, dedicated to San (Padre) Pio. This receives more visitors (over 7 million per year) than any other Christian pilgrimage destination  in the world except for one in Mexico. The other main Gargano shrine is the much older one dedicated to San Michele Arcangelo at Monte Sant'Angelo. These two places are a few kilometres apart on the edge of the escarpment bounding the south side of the Gargano and are frequently visited jointly. The Gargano peninsula, the "spur on the heel of the boot" of Italy, is quite different in physical character from the rest of Puglia. It has a mountainous interior, much of it forested, with a coastline consisting of limestone headlands separating sandy beaches.

San Giovanni Rotondo is inextricably linked with San (Padre) Pio, who lived there from 1916 until his death in 1968. Born Francesco Forgione in the Campanian village of Pietrecina in 1887, he became a Franciscan monk in 1903 at the age of 15 when he adopted the name Pio. He joined the small group of Cappuccini friars at San Giovanni Rotondo's Convento Santa Maria della Grazie in 1916. This was his home until his death.

He quickly generated a reputation for religious fervour, curing people of various diseases, predicting the future, miraculous powers; but also as having "received" stigmata (wounds on hands and feet). All these claims have been widely disputed, and he was accused of being a fake, self publicist and worse. Despite this people flocked to see him from all over the Roman Catholic world, and a Padre Pio cult developed. There was active opposition from the Catholic church authorities until about 1933, then they gradually accepted the inevitable and gave a grudging accommodation (especially grudging from the reforming Pope John XXIII, who was very suspicious of many of Padre Pio's conservative views). This popularity continued after his death in 1968, and Pope John Paul II, a supporter of Padre Pio since he was a young priest, declared him to be a saint - San Pio di Pietrecina - in 2002. About 300,000 people attended the canonisation ceremony.

The massive popularity of San - still usually called Padre - Pio is evident throughout Italy and indeed the world; but especially in Puglia, where there is at least one statue of him in almost every town and village, and hardly a bar or restaurant where his benign, bearded face is not to be seen on display. His followers have continued to flock to San Giovanni Rotondo in their millions, a whole economy is based on their spending power.
Padre Pio was buried in a tomb underneath the Chiesa della Santa Maria della Grazie. However, in order to maintain the popularity of the place as a pilgrimage destination, his body was exhumed 40 years later and (following some extensive restoration) put on display from 2010 in a highly decorated Cripta beneath the new Chiesa di San Pio.

The shrine is a massive complex of buildings at the top of the hill about 2 kilometres beyond the centre of San Giovanni Rotondo. These consist of the old and new Santa Maria della Grazie churches; the new Chiesa di San Pio, usually called the Padre Pio Pilgrimage Church;  the Via Crucis (Way of the Cross); and the massive  hospital founded by Padre Pio, Casa Sollievo della Sofferenza (Home for Relief of the Suffering). These are all situated close to one another, near the bus terminal and car parks, surrounded by shops and stalls selling souvenirs and religious objects, hotels and restaurants, administrative offices linked to promotion of Padre Pio and the base of the Padre Pio Television Channel.

The most obvious building when approaching, the main focal point of the shrine, is the Chiesa Santa Maria della Grazie - the small old church on the left, the larger more modern church on the right. The old church of the convent dates from 1540, and is very attractive inside. This is where Padre Pio held mass etc for most of his life. However, the church became too small to accommodate all the visitors, so the larger new church, next to and linked to the old one, was built in the late 1950's. The main altar of the new church originally had a mosaic depicting only Santa Maria della Grazie (Our Lady of Grace), but after Padre Pio was canonized in 2002, Padre Pio and an angel were included. Padre Pio's body was kept in the crypt of the new church until its removal to the much more elaborate crypt of the Chiesa San Pio in 2010.

Behind Santa Maria delle Grazie is the Chiesa San Pio, also known as the Padre Pio Pilgrimage Church. This massive and uncompromisingly modern church, completed in 2004, is itself a major reason for visiting San Giovanni Rotondo. It was designed by the world famous Italian architect Renzo Piano. There are no pillars, the structure is supported by huge parabolic arches. It can seat 6,500 people inside, but the sloping area leading down to the entrance can take 30,000 people. The church is not visible when approaching the site from below, and nothing prepares you for the scale of the scene when you go up some steps to the left of the small piazza in front of Santa Maria della Grazie. Photographs do not convey this. The wide sloping forum, with a wall (with bird sculptures) and bells on the left, leads to the entrance to the church. Inside it is mainly the scale of the building which impresses.

Some steps near the entrance lead into the Cripta, where the body of Padre Pio is on display in a glass case, usually surrounded by people wanting to touch the glass. The Cripta is decorated extensively with colourful mosaics of scenes from Padre Pio's life.

On the hillside above Santa Maria della Grazie is the Via Crucis Monumentale, a massive flight of steps to a crucifix, with granite, bronze and marble sculptures. Designed by Sicilian sculptor Francesco Messina, construction started in 1968, the day before Padre Pio died, it was completed in 1981.

All these places are open all day and entrance is free. There are frequent religious services, and usually the buildings and area generally are thronged with visitors, including pilgrimage groups - so a weekday visit outside holiday periods is recommended.

The Casa Sollievo della Sofferenza (Home for the Relief of Suffering) is a large hospital building which dominates the site of the shrine. It is the result of a project conceived by Padre Pio in i940, but his plans only took off after the war when a well known Catholic humanitarian and journalist, Barbara Ward, helped him get funding from the United Nations Relief and Rehabilitation Administration. Unusually for a Franciscan, Padre Pio was allowed to directly supervise the project.

Today it is a major private hospital owned by the Catholic church, very well equipped for research and treatment, one of the most advanced in Italy and Europe. It deals with an average of about 60,000 patients per year, about a fifth of them from beyond Puglia; and employs about 2,500 people. It is amazing to witness such an institution in this out of the way location.

Just behind the Municipio is the Museo delle cere di Padre Pio (Wax Museum of Padre Pio) The museum recreates a number of significant scenes from the life of Padre Pio with waxwork models. It is located in the Palazzo Morcaldi, home of a former mayor of the town,  which is of some interest in itself. Padre Pio enthusiasts may want to visit the museum, it is open every day 10.00am - 1.00pm and 3.30pm - 6.30pm, cost 7 euros (includes a guided tour).

There are many places to eat and drink in San Giovanni Rotondo, especially in the area around the shrine.

San Giovanni Rotondo can easily be reached by car, leaving the autostrada A14 at Foggia or San Severo - roads in the Gargano generally are often narrow and winding, but this route is straightforward. There are (pay) car parks close to the Chiesa San Pio.
There are (mainly SITA) bus links a few times a day with Foggia (railway station), Manfredonia (Piazza Marconi) and also Monte Sant'Angelo.  There is a bus terminal very close to the Chiesa San Pio; and bus stops in the centre of San Giovanni Rotondo next to the centro storico.