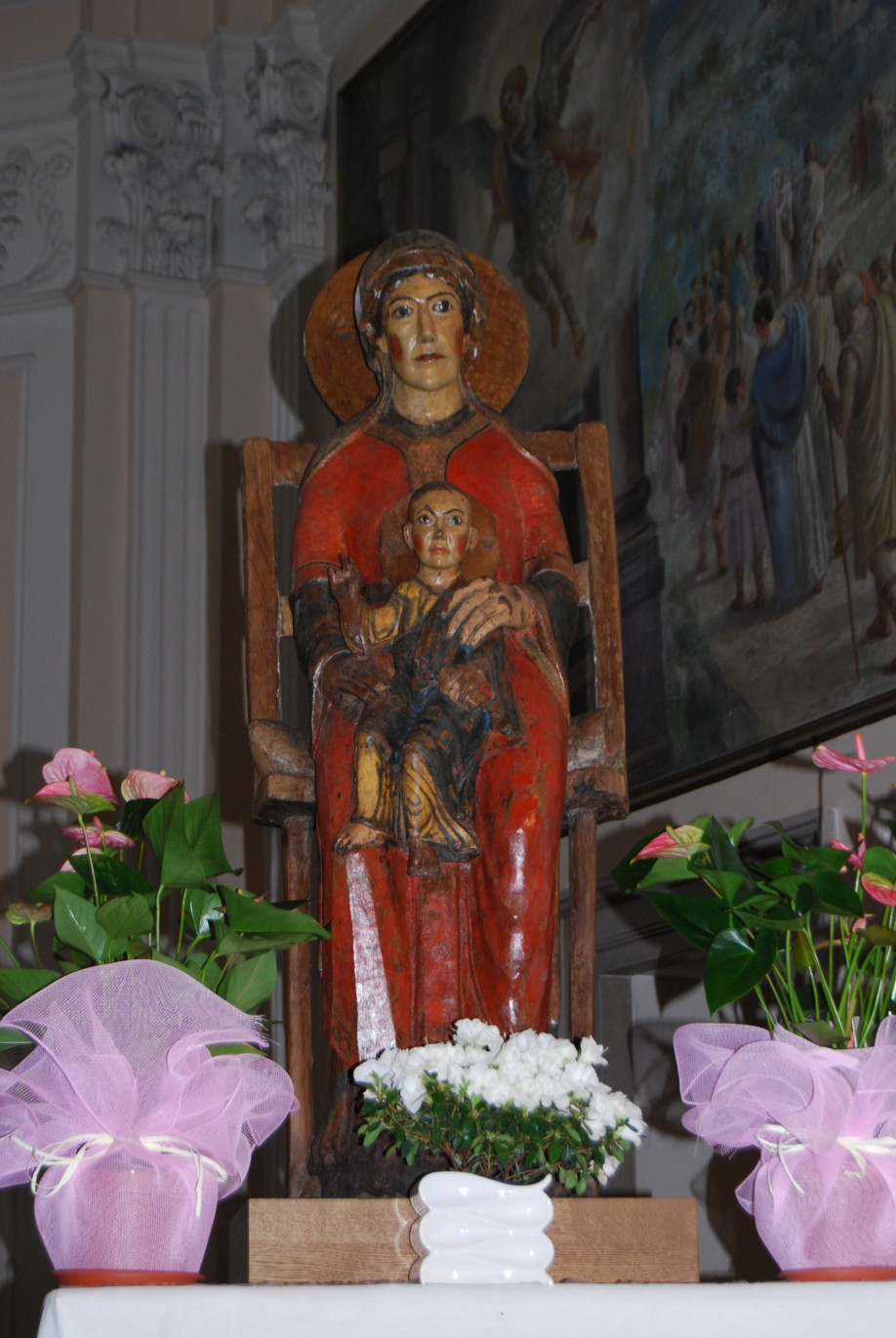 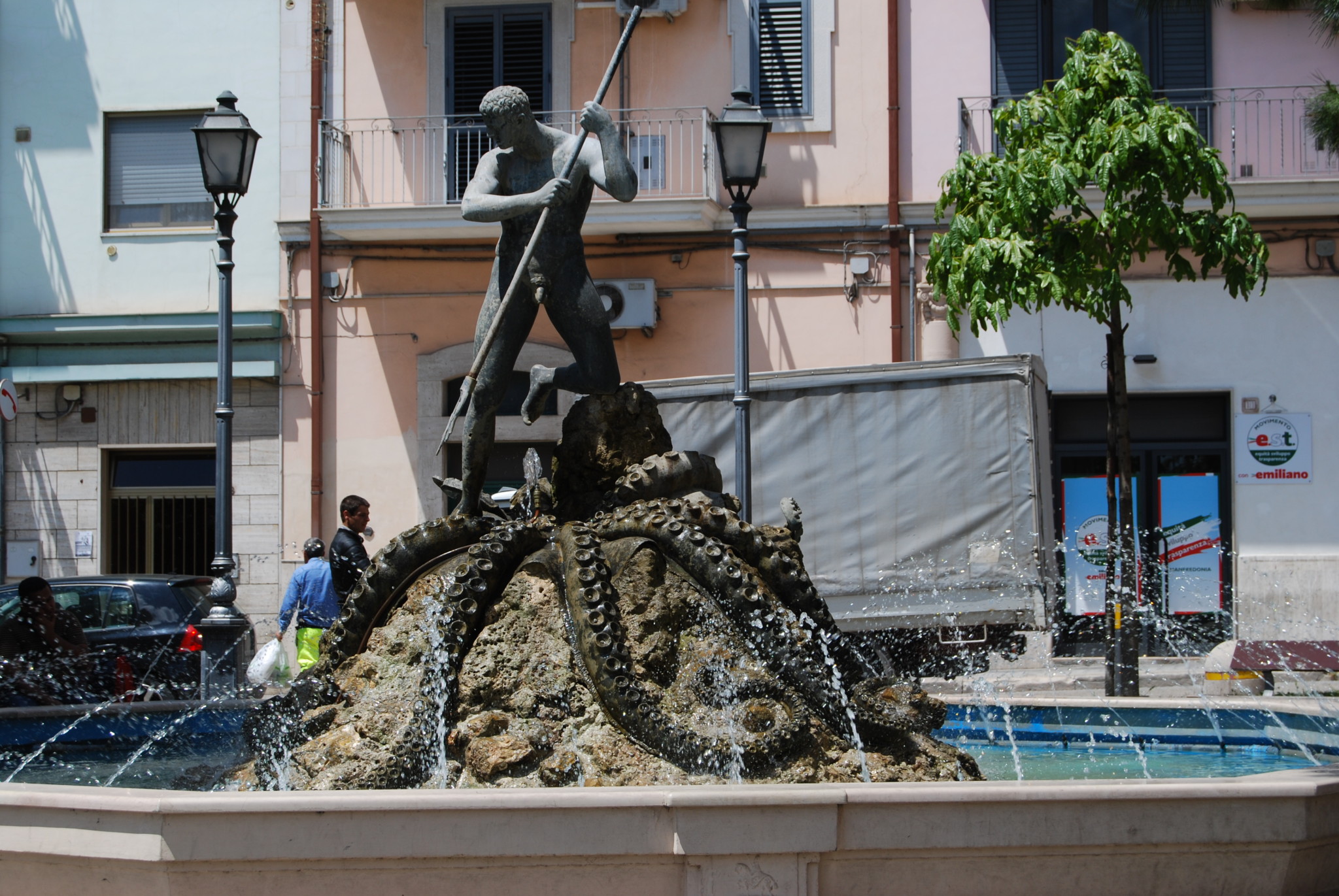 Manfredonia describes itself as "the gateway to the Gargano", and that is accurate - it is not really part of the Gargano peninusula, but is intimately linked to it. It is a moderately large town (population about 57,000), a busy commercial and industrial centre - although a major glass factory there is currently facing an uncertain future. Located on the flat area bordering the Gulf of Manfredonia, it is overlooked by the high escarpment marking the edge of Gargano's interior (Monte Sant'Angelo can be clearly seen high up above Manfredonia).

The city was established as a completely new entity in 1256-1263 by King Manfred of Sicily (a son of Frederick II) to replace the nearby ancient city of Siponto which had become disease ridden due to stagnant lagoons caused by an earthquake in 1223. The regular street pattern in the central area reflects this planned construction. However, in the 17th century, it was almost completely destroyed by the Turks, and most of the key buildings were built or rebuilt after that time. Manfredonia is very proud of its founder, who played a major role in the 13th century power struggles throughout Italy before being killed at the Battle of Benevento in 1266, where his army was defeated by Charles of Anjou (who was fighting on behalf of the Pope).

Manfredonia is only just beginning to make serious investment in tourism. Its main sights of historic and cultural interest are all part of a fabric of residential and commercial activity in its extensive central area. In this area and outside it, the overwhelming impression is of an active, working town just getting on with things. A new tourist information centre was opened in 2015, in Piazetta Mercato (just off Piazza del Popolo in the city centre). This is open 10.30am-12.30pm and 5.00pm-7.30pm every day except Sunday; it has a lot of information (including an especially useful street map) and helpful staff.

The central area is big, a rectangle roughly 800 metres by 600metres, bounded by the seafront and the line of the old city walls, of which some parts, including a couple of towers, remain,  intermingled with shops and residences. The main street (Corso Manfredi) runs the length of the centre, from Piazza Marconi to Il Castello. Partly pedestrianised, this street contains shops and a few bars/cafes interspersed with18th century Baroque palazzi and churches (including the attractive Chiesa Stella Maris towards the castle end of the street). The Corso is quite lively in the evening, especially where it intersects with the main square, Piazza del Popolo.

The former church and convent of San Domenico forms an imposing background to Piazza del Popolo and now houses the local municipal offices. It was originally constructed at the end of the 13th century, but was destroyed by the Turks and rebuilt in the previous Gothic style in the 18th century. Enter the cloisters from the Piazza (NB this is a public building, so you may be questioned briefly by a guard). The cloisters are a small arcaded square with a well in the middle. At the far side of the cloisters, through some glass doors, is the entrance to the Capella dell Maddalena, which contains some frescoes dating back to the 13th century; the Capella houses a small display of pottery and other artefacts.

Il Castello di Re Manfredi dominates one corner of the old city. It was built in 1265 as a solid rectangular fortress with towers and an internal courtyard, considerably extended with additional bastions by the Aragonese in the 15th century. Surrounded by a pleasant park, the castle today marks one end of the Corso Manfredi. Its impressive ramparts can be viewed from the outside. However, the inside is not open to visitors. It is undergoing an extensive and prolonged reconstruction programme, we have been unable to establish when this is due to be completed. The castle houses a National Archaeological Museum, which will presumably reopen when the work is finished. In the meantime a walk round the outside of the castle should not be missed if you are in Manfedonia.

In the middle of the city, close to Piazza del Popolo, is Il Duomo, La Cattedrale di San Lorenzo Maiorano (a bishop of Siponto in the 5th century, one of the patron saints of Manfredonia).  The original church was built in the early 14th century, but destroyed when the city was attacked by the Turks in 1620, and rebuilt on a much more limited scale. It is still an enormous building. Unusually, the main entrance is half way along one side. The entrance facade and huge (but somewhat bleak) open space in front of the entrance were built in 1966, and commemorate Pope John XXIII. The adjacent campanile was erected by Cardinal Orsini in 1677. Inside the cathedral there are various icons and relics, including a wooden crucifix dedicated to San Leonardo; and the arm of San Lorenzo - the rest of his body was destroyed in the invasion by the Turks. There are also wall frescoes produced by a Milanese artist, Natale Penati, in 1940. The cathedral is usually open in the mornings and evenings.

There are various other palazzi and churches around the central area. They help give Manfredonia a certain elegance alongside its rather workaday image. There is surprisingly little made of the waterfront in the central area, it is covered with inaccessible port related buildings. You can get access to the sea at a beach just beyond the castle, but if you want to go swimming, we suggest looking for better options further up the coast (or maybe go the the Lido at Siponto).

Part of the commune of Manfredonia but 3-4 kilometres west of the old city is the resort area of Siponto. This was the main settlement in the area until Manfredonia itself was founded in the 13th century, occupied by Greeks, Romans (who called it Sipontum), Byzantines, Slavs, Turks, Normans, and Swabians. There are therefore a number of important archeological sites and museums in Siponto, interspersed with holiday development. A specific attraction is a nature resrve based on rush enclosed salt water lagoons, L'Oasi Lago Salso. Siponto is connected to Manfredonia centre by a new promenade, Lungomare del Sole. Both Siponto and the Lungmare del Sole are fairly desolate outside the main summer months, most of the properties are holiday residences, and the Lido at Siponto is closed for much of the year.

A large new marina has been built at the start of the Lungomare del Sole, just a few minutes walk from Piazza Marconi - this mainly functions in the summer and at weekends, has restaurants and bars, and is the base for boat excursions along the coast as far as Vieste).

An interesting feature of Manfredonia is a series of newly commissioned bronze sculptures dotted around the town. These include an octopus fountain in Piazza Marconi and a large depiction of King Manfred on horseback near Il Castello.

Places to eat and drink in the central area are not plentiful. There are a few bars along Corso Manfredi and in Piazza del Popolo. If you are looking for a restaurant and don't have somewhere specific in mind, there are some located on the streets immediately parallel to Corso Manfredi - Corso Roma and Via Maddalena.

Manfredonia is easy to reach by car, a dual carriageway links it to the autostrada at Foggia, about 40km in distance.

Public transport links with Foggia are good by bus, less good by train. We don't advise using the train. The service (which takes about 30 minutes) only runs a few times a day, solely in the early morning and late afternoon; and the station in Manfedonia is short of the city centre and the main transport hub on Piazza Marconi, necessitating a 5-10 minute walk along an unpleasant busy road. Trains do stop at the small railway station in Siponto if that is where you are heading. There is also a small tourist information centre at Manfredonia railway station.

Direct bus services run between Foggia (railway station) and Manfredonia (Piazza Marconi) roughly hourly, taking 45 minutes. Tickets can be bought in advance at several bars and bookshops in either place. Piazza Marconi is at one end of Corso Manfredi, so is the main spot for picking up buses in Manfredonia. As well as Foggia, there are bus services connecting Manfredonia with  Vieste (two hours) , San Giovanni Rotondo (an hour) and Monte Sant' Angelo (45 minutes). Tickets can be bought at the Bar Impero on the Piazza.
Buses for Foggia and San Giovanni  Rotondo leave from the bus shelter by the octopus statue; however, buses for Vieste and Monte Sant'Angelo leave from or call at a spot on the other side of the road, on the edge of a small roundabout, where there is no obvious bus stop or waiting area! If in doubt, ask someone (at the Bar or a bus driver, they are all very helpful). 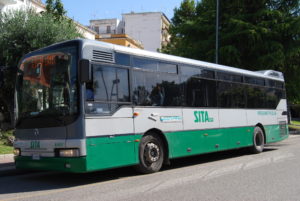