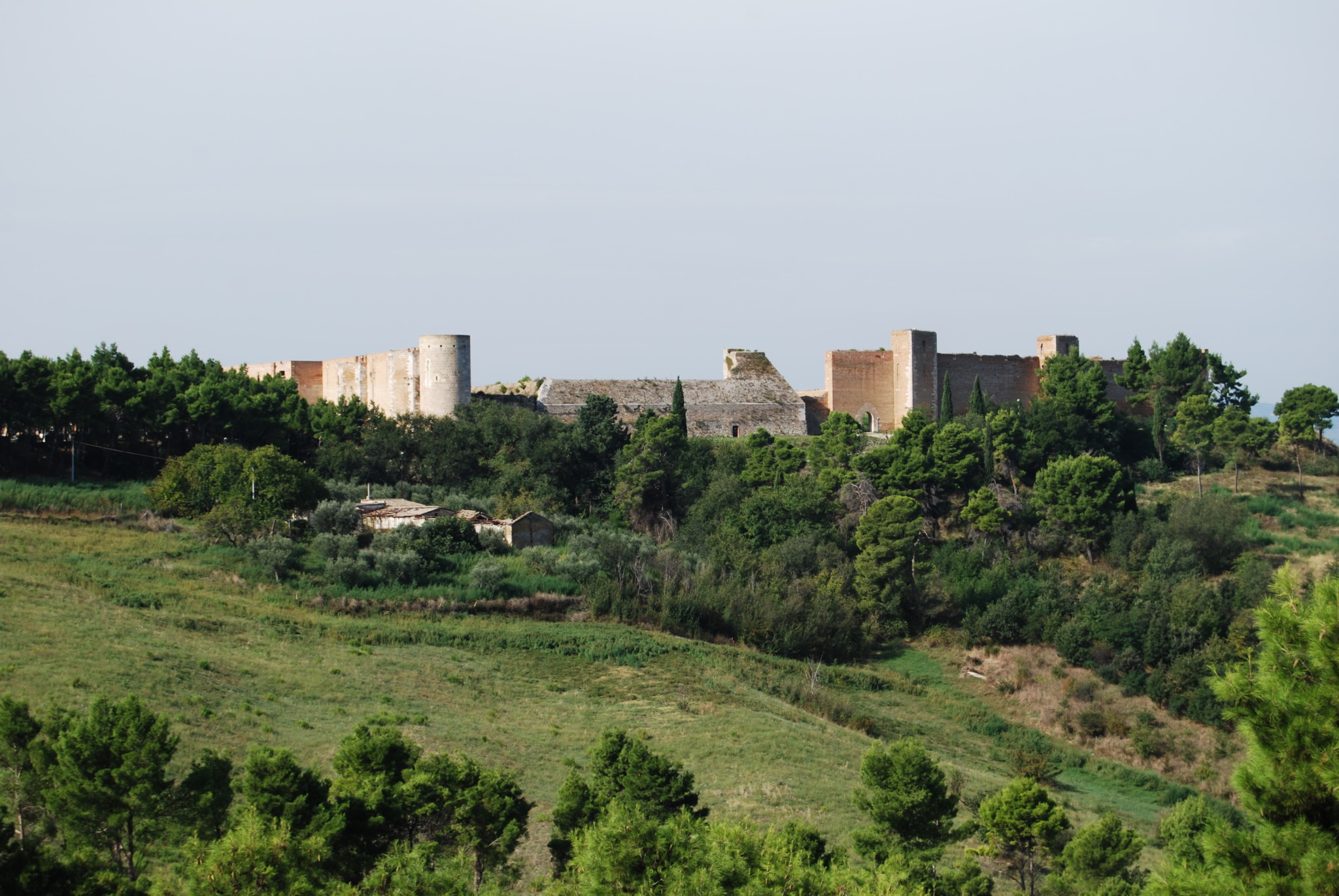 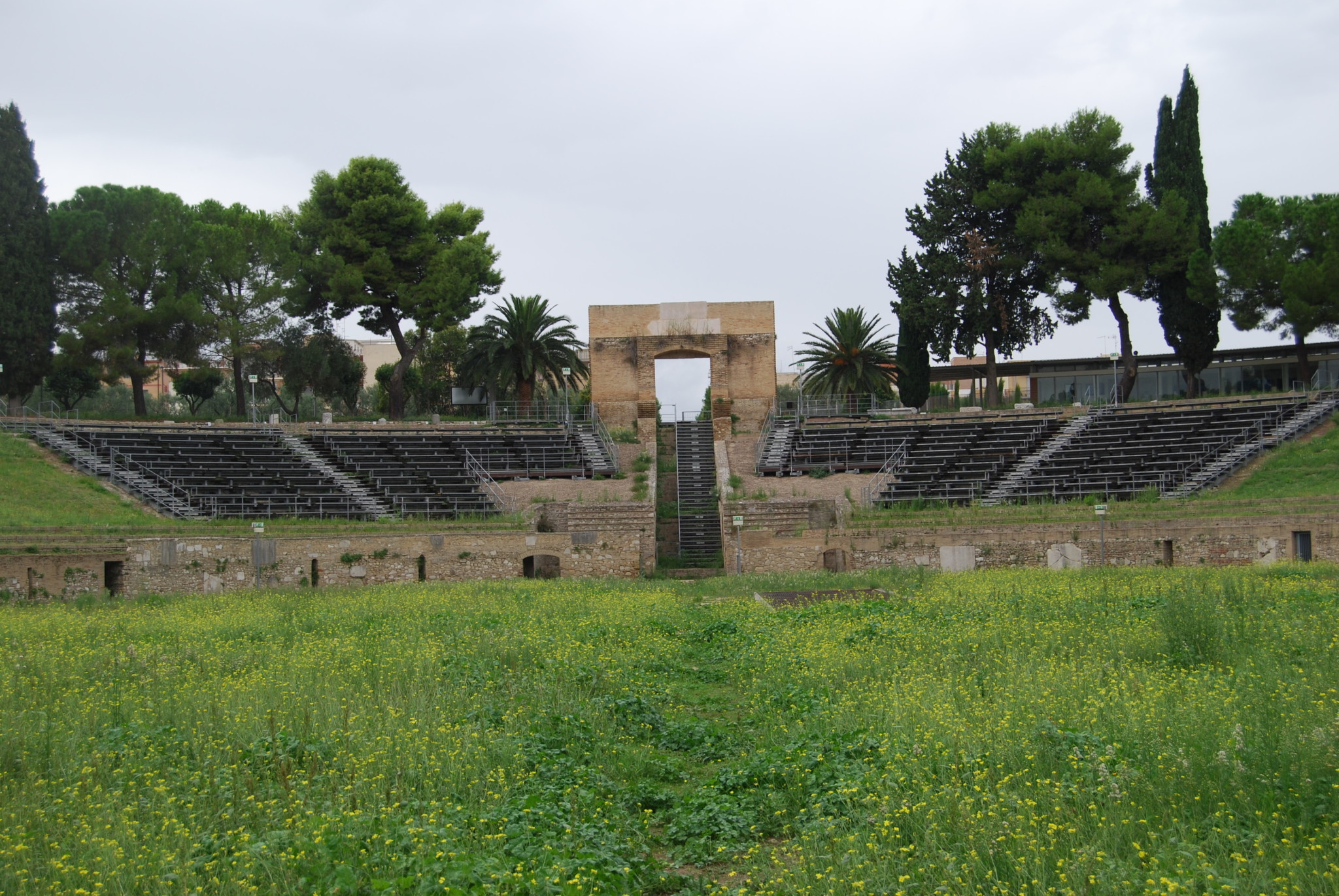 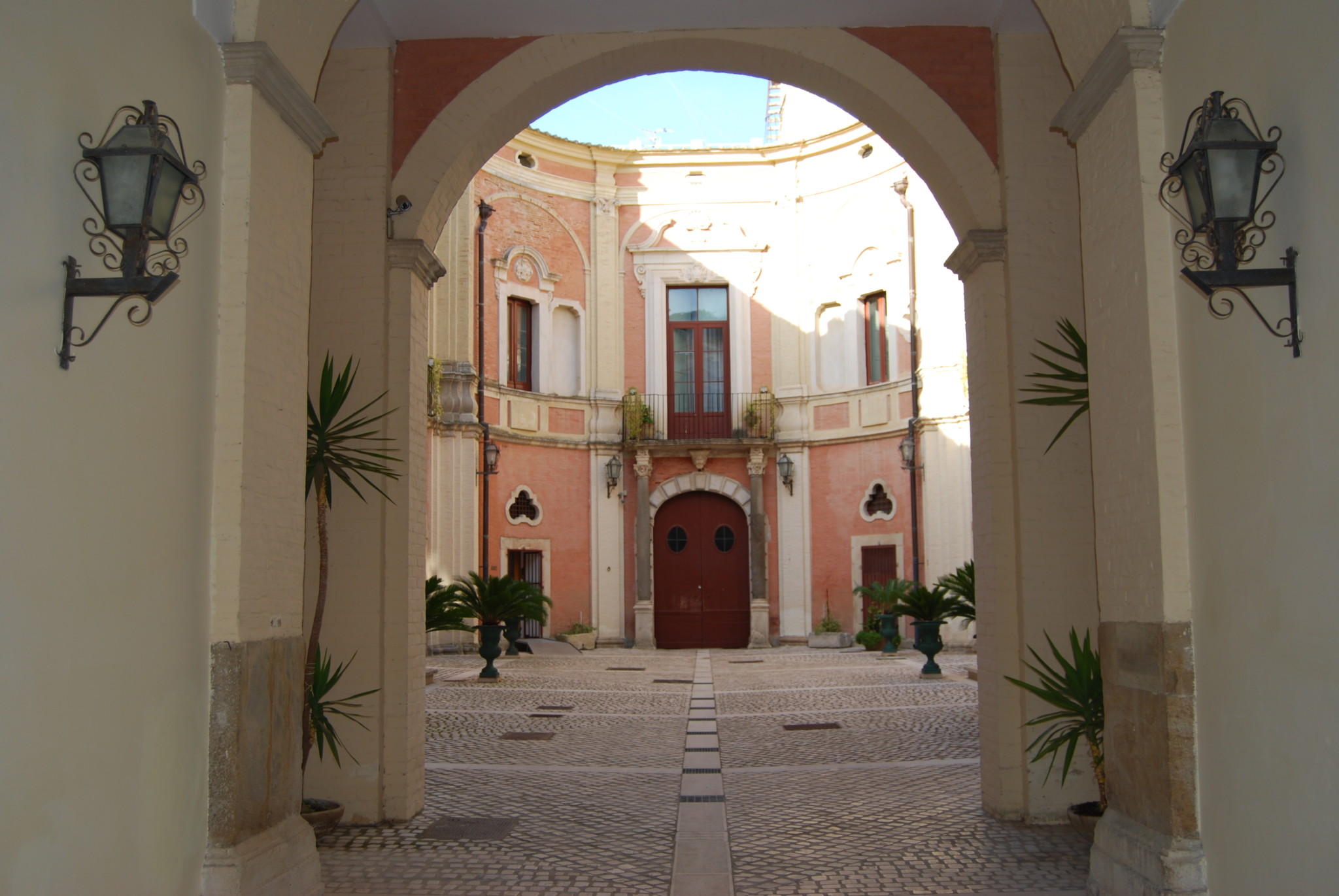 Lucera is a city of about 34,000 inhabitants located 15 km west of Foggia. Two important key "sights" are a huge Swabian/Angevin fortress and the largest Roman amphitheatre in the south of Italy. However, Lucera also has a lively and attractive historic core with a beautiful cathedral. Do not be discouraged by the many blocks of flats which dominate the outskirts of Lucera - the central area is a wonderful place to visit and is easy to reach by road and public transport.

We unhesitatingly recommend a visit to Lucera, especially if you are looking for a stopping off place in this area while travelling to or from the south of Puglia - in this latter respect it is preferable to San Severo or Foggia. You can enjoy the centro storico on a short visit, maybe having lunch or a drink near the cathedral. If you want to visit the Castello and/or the Roman amphitheatre, you will need to allow a bit longer, about an hour each. Both sites are just outside the central area but at opposite sides, each about 10-15 minutes on foot from the centre; they both have car parks next to them and are easy to find via brown road signs.

The city is built on some low hills rising out of the huge plain (the Tavolgiere) which dominates this northern part of Puglia. Originally a Bronze Age settlement, it came to prominence as a Roman city, especially under the Emperor Augustus, when the Amphitheatre was constructed. It subsequently declined, but became a base for Frederick II, who not only started on the huge fortress, but relocated the Muslim population of Sicily (to reduce conflict there) to Lucera and allowed them to practice their religion, a bold step for a Holy Roman Emperor. So for a period in the 13th Century Lucera had a Muslim population of 15-20,000, accommodated mainly in the Castello. The city was sacked by the Christian Angevins in1369. The Muslim population other than those who converted was executed, expelled or sold into slavery, and its mosques replaced by churches including the present day cathedral.

The centro storico is fairly extensive, bounded by a road just outside the line of the old city walls, some of which remain. Inside the old walls are streets paved in traditional "chianche" stone flags, lined by elegant buildings, many of them 18th century palazzi, with shops, bars etc at street level. The streets are not especially narrow compared with some other Puglian cities, and vehicles compete with pedestrians except for the very central core around the Duomo . Nevertheless this area is best visited on foot.

A good starting point is Piazza del Popolo, which is just a traffic junction/roundabout outside the old walls; the road from Foggia and the road from the railway station lead straight to it. From here you can enter the centro storico through the archway of the Porta Troia and just follow the streets through to the linked Piazza Duomo and Piazza Nocelli which are the heart of the city. Lucera is a very lively place, and in the evening especially the streets and squares are full of people of all ages making the traditional passegiata.

Lucera is surprisingly underdeveloped as a tourist destination, with no souvenir shops or similar. There is a Tourist Information Office in Piazza Nocelli (open 9.00am-1.00pm and 3.30-7.30pm Tuesdays to Sundays). It is very limited - you can get a useful map of the centro storico there. However plenty of brown signs on the streets give directions to the main attractions.

The Duomo is la Cattedrale Santa Maria Assunta, It is a large and imposing church completed in 1317 (the tower added later), built on the site of what had previously been a mosque (itself built on the site of an older church) serving the community of Moslems relocated to Lucera by Federick II. It is built in the Gothic style, comparatively plain both outside and inside - various 16th and 17th Century Baroque elements were added internally but subsequently removed.

There are several other churches in Lucera centro storico, notably San Domenico and San Francesco Antonio Fasani, dedicated to the local saint; there is a statue of him in the pleasant modern piazza outside the church.

There are also two museums which are located in attractive old palazzi, interesting in themselves as well as for their exhibits - the Museo Civico di G Fiorelli, and the Museo Diocesano inside the Palazzo Vescovile opposite the Duomo.

The Castello (known as la Fortezza Svevo Angioina - the Swabian-Angevin Fortress) is located in a dominant position about 500 metres to the west of the centro storico (you can get a good view from the Villa Communale). Although it is largely a ruin, mainly just the external walls, it is enormous. It can be visited and is well worth going to see. The scale of the building once inside its walls is dramatically evident.

Initially designed and built in 1233 by Frederick II, Holy Roman Emperor, to accommodate the Muslim Saracens of Sicily. The walls were added between 1269 and 1283 by the Angevins to make it a fully fortified military base as well as an imperial palace. It became a massive complex reflecting Lucera's role as the main city in this area. However, it was badly damaged by an earthquake in 1456, and as Lucera city developed nearby as a civic and commercial centre, it was gradually abandoned and largely demolished in the 18th century so that its materials could be used for major civic construction. The walls and some towers have been partly restored.

To visit the Castello, you cross a bridge over the former moat and enter the extensive open area surrounded by the walls via large gateway. It is open 9.00am-1.00pm and 3.30-7.30pm, every day except Monday. You pay at a wooden hut a little way inside - 3 euros (NB for 6 euros you can get a single ticket for all Lucera's sites and museums). There are displays indicating positions of various buildings within the walls - including barracks, a church and most importantly the pyramid like palace which is also the site of the original Frederick II castle, the base still clearly evident. A14-metre deep well inside the palace courtyard provided water to the castle.

The most dramatic feature is the wall itself. This is 900 metres long, and incorporated 13 square towers, two pentagonal bastions, seven buttresses and two cylindrical corner towers. You can visit one of the round towers and walk along a short section of the top of the wall next to it. Inside the tower is an informative and very well produced video reconstruction of the buildings of which only traces now remain within the walls. An especially good view of the outside of the walls can be obtained from a viewpoint about two hundred metres beyond the bridge over the old moat.

The Anfiteatro di Lucera lies in a natural depression about 500 metres east of the city centre. It was built in 27 BC in honour of Emperor Octavian when the Roman Senate conferred on him the title of "Augustus" - it is usually called the Augustan Amphitheatre. It was used for the usual Roman displays - gymnastics, gladiatorial contests, wild animals, mock naval battles etc. However its use diminished with the spread of Christianity, and much of its structure was used as building material over the centuries, especially for the Castello. It was rediscovered in 1932, and restored over the following 20 years. It is open 9.00am- 1.00pm and 3.30-7.30pm, every day except Monday, tickets at an office in a small museum/display area on the site. You enter via reconstructed marble gateways, descend into the arena and get the feel of what it might have been like over 1000 years ago.

To reach Lucera by road, leave the autostrada at Foggia and follow the signs. It is about 20 minutes drive, and the road leads almost directly into Piazza del Popolo where there are car parks. There are also signs to the Castello and Anfiteatro.

By rail, take the Ferrovia del Gargano train from Foggia. Buy tickets at the newspaper stand in the station. There are trains at least hourly, usually half hourly, the trip takes about 20 minutes - make sure you don't get off at the first station called Lucera, this is a new station serving residential and commercial parts of the town and does not have a separate name! A straight 10-15 minute walk up the road from the station, slightly uphill, gets you to Piazza del Popolo; there are local buses (orange) outside the station if you want to avoid the walk.

There are several restaurants and bars in Lucera centro storico - including a few establishments speclalising in beers. If you want a restaurant meal, it would be sensible to have somewhere in mind, just hoping you will encounter somewhere is not enough. There are a couple of quite expensive places in Piazza Duomo; we ourselves favour the John Martin pub just opposite the Cattedrale, which does good food as well as beer and wine. Another option for a reliable, economical and traditional restaurant, popular with locals at lunchtime and in the evening, is underneath the Villa Imperiale Hotel just off Piazza el Popolo - there is no sign of the restaurant at the main hotel entrance, but just pop into their reception and ask for directions to the restaurant which is down two sets of stairs!