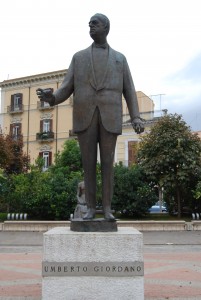 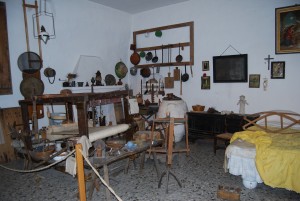 Foggia is the capital of the Province of Foggia. The name is derived from the Latin “fovea” meaning “pit”, referring to stores for grain. It stands within the flat, lowland country between the mountainous areas of the Gargano and Daunia called Tavoliere, the “granary of Italy”.

Frederick II built a palace here in the 13th Century and held court during a relatively prosperous period for Foggia, but this was followed by a decline in the local economy, further exacerbated by a number of earthquakes which repeatedly wreaked havoc on the city. The House of Bourbon helped rebuild much of the city, and later on it was  helped by the development of railways and construction of the Puglia aqueduct in 1924 - Foggia had long experienced water supply problems. Today Foggia is a large city, population over 150,000, an important commercial, industrial and administrative centre. Agriculture remains an important part of the economy, particularly wheat production and processing, as well as watermelons and tomatoes - although for centuries it was most famous as a sheep farming area.

The flat land surrounding Foggia has always been the source of agricultural prosperity. However, it was also ideal territory for airfield construction. During the Second World War the city was the focus for a network of about 20 military airfields, as well as being a vital railway junction. This strategic significance made it a target for serious bombing by Allied forces, which reached its peak in mid 1943 as the Allied forces invaded and then advanced up the Italian peninsula; including some major attacks after Italy surrendered, because the retreating German forces occupied the city and surrounding area. In late 1943 Foggia was taken by the advancing forces and the airfield complex became the base for Allied air forces for the rest of the war.

As a result of the bombing, however, most of the city was reduced to rubble and over 20,000 civilians, roughly a third of the then population, were killed, including 9,000 in a single air raid in August 1943 (compared with the 600 deaths in Coventry in the infamous November 1940 bombing). This degree of suffering by the city and its inhabitants was officially recognised after the war - Foggia was awarded the Italian gold medal for civil value on November 22, 1959 and the Italian gold medal for military value on April 25, 2007.

This piece of recent history is not obvious to the casual visitor - Foggia's limited attempts at tourist promotion do not draw attention to it. But you need to know about this background to understand the unusual character of Foggia's central area, where most of the buildings have been reconstructed in the post war period, and give it a more modern feel than might be expected in such a historic city.

As a tourist centre, Foggia can hardly be recommended compared with other places in Puglia. There are a few historic buildings within the central area fabric, but they have to be sought out - there are hardly any direction signs or explanation notices. Nevertheless it has a lively atmosphere, and a much better shopping centre than other large towns in north Puglia except for Bari (much of the central area is car free). You may find it convenient to stop off here, especially if travelling by rail - but unfortunately there are no left luggage facilities at the station. If you are staying somewhere else not far away, a trip to Foggia is well worth considering.

The centre is about five minutes' walk from the railway station - walk straight ahead along Viale XXIV Maggio until you reach Piazza Cavour, with the arched entrance to the Villa Communale (a tree lined promenade with fountains, playgrounds etc) on your left. Turn right from this Piazza and you encounter one of the best things about Foggia - a pleasant Piazza named after somebody other than Cavour, Garibaldi etc, locally born composer Umberto Giordano, who died in 1948 at the age of 81. He was famous for his verismo (new naturalistic/realistic style) operas in the first half of the 20th century, along with the now better known Puccini and Leoncavallo).  The Piazza contains a statue of Giordano surrounded by representations of characters from his main operas, interspersed by some wonderful trees. The Piazza was recently revitalised and is an excellent focal point.

From the Piazza, stroll along the Corso Vittorio Emanuele II, a gracious pedestrianised street with a variety of quality shops. To the right you will spot the newly restored Teatro Giordano in Piazza Battistic - try to look inside if you can, better still take in a performance.

And then on the left you can reach the Cattedrale della Santa Maria Assunta in Coelo, tucked away in the side streets. The cathedral was originally built in Romanesque style in the 12th century, but substantially rebuilt and restored in baroque style after the 1731 earthquake. There are frescoes inside and an interesting crypt, but we have never managed to be there when the cathedral is open.

If you carry on along Corso Vittorio Emanuele II, it is crossed by Via Arpi, the oldest street in the city, filled with churches, palaces and other buildings of note such as Sant'Agostino, Chiesa San Giovanni di Dio, Palazzo Belvedere, Chiesa di San Tommaso, Chiesa di Santa Chiara and Chiesa dell'Addolorata - the last being the location of the popular religious ceremony and procession, staged each Good Friday, when Foggiese carry a statue of Vergine Addolorata through the city.

Turn right along Via Arpi from Corso Vittorio Emanuele II, you will see the reconstructed and extended Porta Arpana, the original main gate to the city.

Adjoining the gateway is the Museo Civico e Pinacoteca, a well organised museum and art gallery, well worth a visit (cost is 5 euros, but concessions include free entry for people aged 65 and over, which these days is unusual; a visit requires about an hour minimum). The museum  contains tablets and statues from nearby archaeological sites; a very interesting display of traditional living and working artefacts; and drawings/exhibits about the development of Foggia. The art gallery contains a large and varied collection of works by Francesco Saviano Altamura, a 19th century artist born in Foggia although working mainly in Naples, who was mostly known for depicting historical scenes; he was heavily involved in the re-unification movement, including fighting with the forces of Garibaldi in 1860, and married an English artist Jane Benham Hay who was associated with the pre-Raphaelite movement.

There are numerous bars, coffee shops and restaurants in Foggia central area, although you may want to find the address of a restaurant in advance to save you looking around for somewhere good to eat - the best places  tend to be down side streets. We have had an excellent lunch at the traditional and unpretentious Osteria La Giara (Via Saverio Altamura, just off Corso Vittorio Emanuele II), but there are many other options.