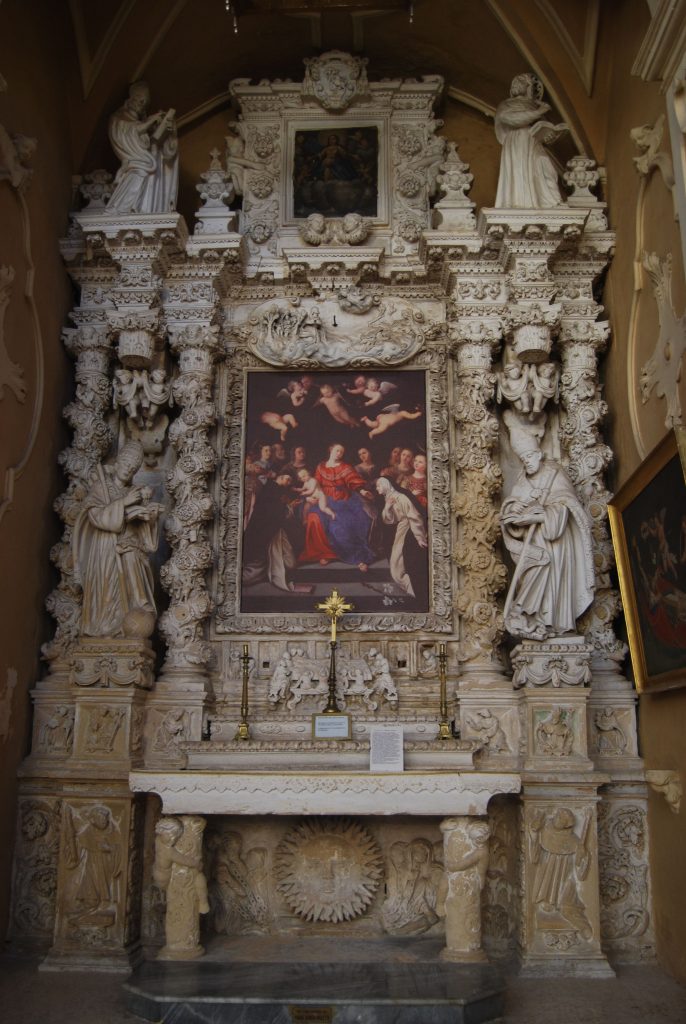 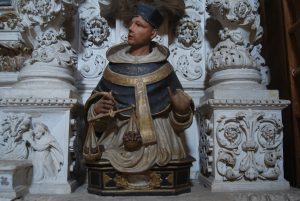 Tricase, population 17,000, is the main town in the far south of the Salento. The centro storico has a majestic square with a concentration of  historic buildings, including one of Puglia's very finest baroque churches. It is an excellent place to stop off if you are driving to/from Santa Maria di Leuca, which is about 20 km further south. It can easily be reached by public transport, the station on the Ferrovaria Sud Est has direct trains to and from Lecce via Zollino and is a few minutes walk from the centre. Tricase is also a pleasant place to stay if you want a base from which to explore the tip of Italy's heel (NB we can personally recommend the modern Callistos Hotel on the edge of the town centre, with its own car parking and just a few yards from the railway station).

Tricase, as the name suggests, sprang from an area with originally three farmhouses. There are traces of its Roman occupation and records of its ownership by a series of Angevin rulers, finally Balzo Orsino. In 1588 it passed into the hands of the powerful Gallone family, who built the castle which dominates the central area. They established Tricase's key position in the south of Italy, and the family remained continuously in control of the city until 1806 (and continued to live there afterwards). Maria Bianca Gallone, last Princess of Tricase, died in 1982.

The imposing central piazza, Piazza Pisanelli, is the place to head for.  This is dominated by the Gallone castle, the Chiesa Madre and the Chiesa di San Domenica. In the middle is a statute of local notable Guiseppe Pisanelli (1812-1897), a lawyer, politician and activist through the period of Italy's unification, author of a significant legal code for the new Italian government. 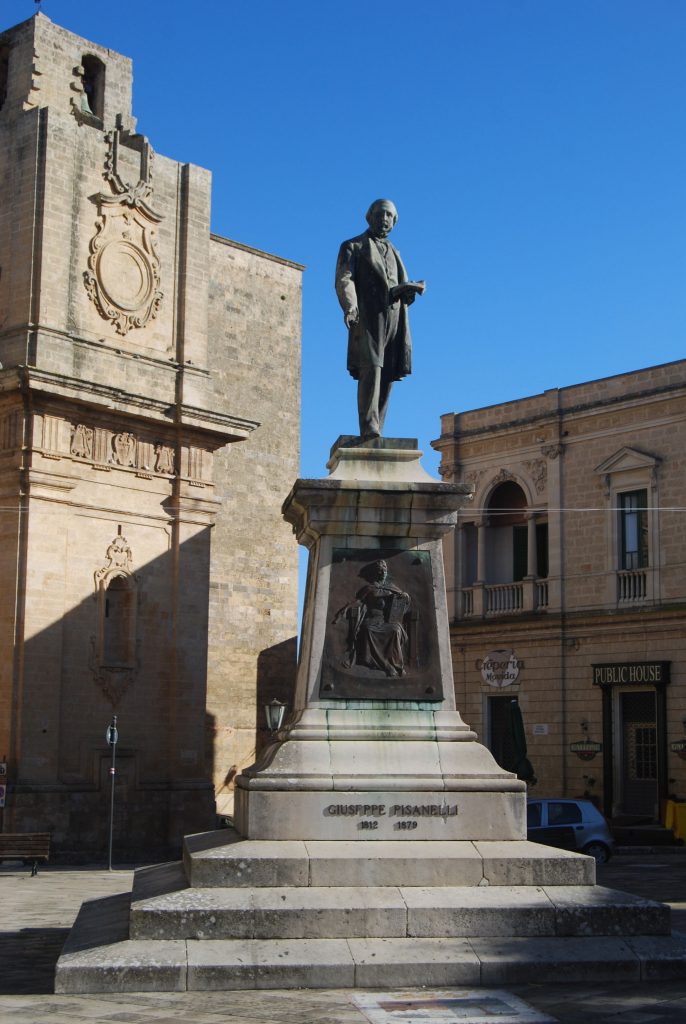 The square also accommodates a couple of bars, one of which, la Farmacia Balboa, is a stylish cocktail bar modelled on the old style pharmacy which it replaced, including waiters in white coats. Next to this is a restaurant/pub, the Gallone which serves food and drink with a non-Italian style, mainly Irish! We can recommend both places but there are more traditional bars and restaurants nearby. 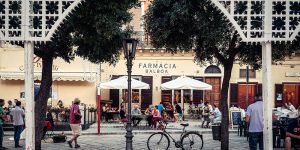 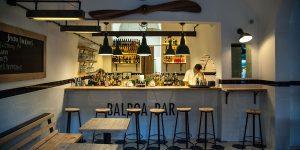 The Castello Gallone, also known as the Palazzo dei Principi Gallone, occupies all one side of the Piazza Pisanelli. It consists of a 14th century fortress tower and related structure, and the main body of the building built as a palazzo in 1599-1657. In 1661 both parts were converted into a home for the Gallone family by Stefano II Gallone, the first prince of Tricase. It is said that Stefano II Gallone wanted to make as many rooms as the days of the year, including a room called "of the throne" large enough to accommodate over a thousand people.
The Castello/Palazzo remained in the ownership of the Gallone family and its descendants until the 1950s, when it was bought by the Commune of Tricase. It houses the municipal offices. While not an "official" tourist attraction, it is open to the public and it is possible to wander in and around the building. If you go upstairs you can look out over the Piazza, see the city council chamber, and view the Throne Room which is used for concerts, exhibitions etc. Crucially, the Castello is the main base for the important Salento International Film Festival, featuring independent films from all over the world; this is held annually in the first week of September.

The Chiesa Madre of Tricase, dedicated to the Virgin Mary, has a frontage with an entrance onto the lower end of Piazza Pisanelli, although its main frontage is on the Piazza Don Tonino Bello, which can be reached through an archway off the main square. The building was completed in 1784; previous churches on the site had been damaged by the Turks and general depreciation. It was designed by architect, Adriano Preite of (1724 - 1804). The interior is surprisingly big and has the shape of a cross. There are numerous windows which make the church very light. There are windows on the sides of the roof at the intersection of the cross in the centre of the church, which have a beautiful effect on the ceiling there.  Walls are decorated in light stucco. The high altar, built in 1876, is dedicated to the Nativity of the Virgin Mary. There are twelve side altars. 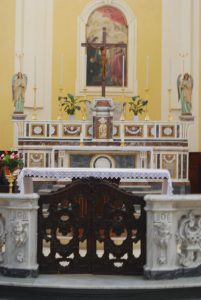 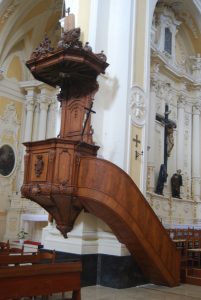 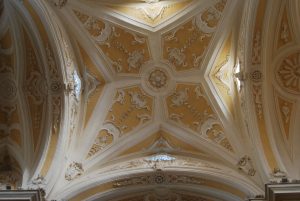 The pulpit carved in foliage is the work of Raffaele Monteanni of Lequile, near Lecce, in 1795. There are paintings and other objects including some transferred from the older church buildings on the site. Some paintings are attributed to famous Italian artists including Titian, Catalano, Coppola, La Palma and Veronese.

The church was closed 1992-1995 for a complete restoration. Its reopening was commemorated by a new large painting "Il Cenacolo" (The Last Supper), measuring 8 x 4.25 meters, by the painter Roberto Buttazzo of Lequile, which was placed inside the main entrance door.

Also fronting onto Piazza Pisanelli, with an imposing flight of steps in front, is the Chiesa di San Domenico da Guzman, built in 1679-1703.  The Dominican monastery was founded in Tricase in the 13th century. When the church was built to replace an older structure, the Domincan order was very well supported financially by the local nobility and merchant classes. No expense was spared in the elaborate construction, design and decoration. The result is a baroque highlight of Puglia, and a must for any visitor. 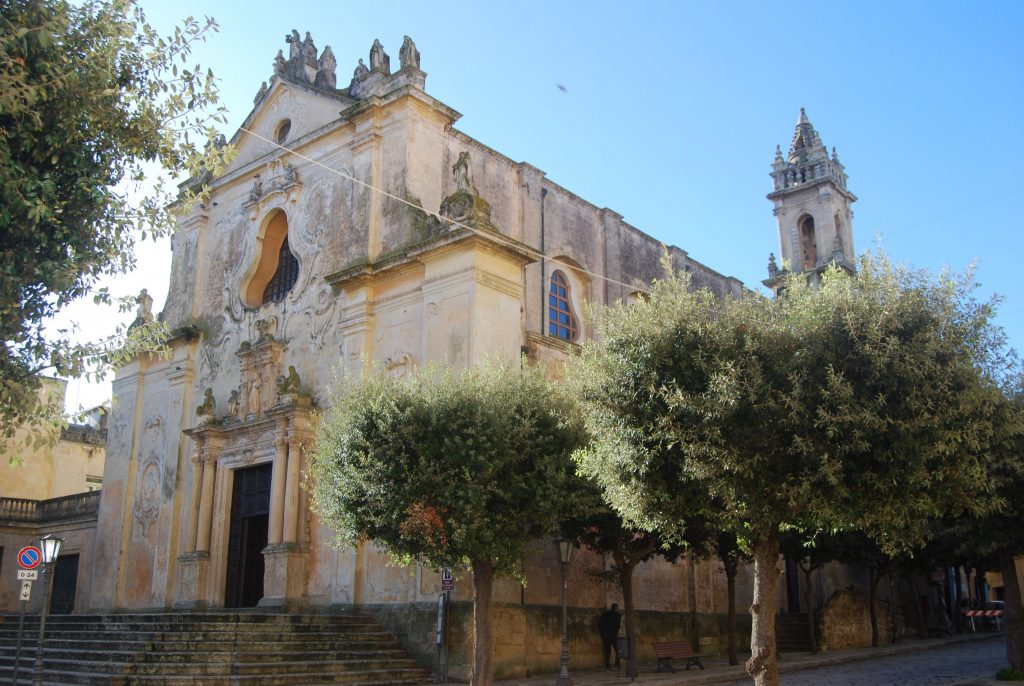