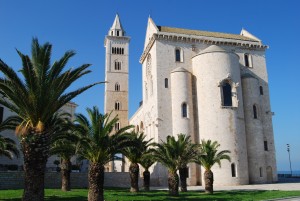 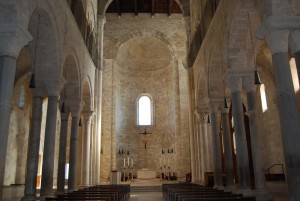 About 40km north of Bari and a short distance south east from Barletta is Trani. An ancient Greek and Roman settlement of little note, Trani rose to prominence in the 11th Century as a busy port, and was responsible for issuing the 'Ordinamente et Consuetudo Maris', a maritime law code, believed to be one of the first in the world, and certainly in the West; this is celebrated in the name of one of the main waterfront streets of Trani, Via Statuti Marittimi.

Of all the towns and cities in this northern part of Puglia, we find Trani to be the most attractive. Quite apart from the spectacular cathedral and castle for which it is rightly famous, the whole place has a wonderful "feel", with majestic buildings of pale yellow limestone, well maintained pavements, elegant tree lined streets, attractive squares, lively character combined with refinement. The local council keeps the place very clean, and apparently free from graffiti.

Trani is quite a long trip from our base in Ostuni, about an hour and a half by car, a couple of hours by the cheaper but slower regional trains. It is worth the trouble if you have time and inclination, and the best place to combine with a visit to nearby Castel del Monte, north Puglia's most famous site. And if you are travelling towards Ostuni from Rome, Naples or further up the Adriatic coast and want somewhere rewarding to break the journey, Trani is absolutely ideal. The key area for visitors is reasonably compact, so it is possible to have an interesting short visit if time is an issue.

The railway station is about 10 minutes walk from the harbour area where most interest is concentrated, but it is a very pleasant walk on wide pavements. Just go straight ahead from the station along the elegant, tree-lined Corso Cavour, across the tree shaded Piazza della Repubblica (more like a park than a square) and you reach the Piazza Plebiscito with the large church of San Domenico to your right, the Villa Communale (city gardens) in front of you, the harbour area visible to your left. There is a map of the city next to the entrance to the Villa Communale if you want to get oriented.

The Villa Communale is not to be missed. These extensive and beautiful gardens next to the sea are incredibly well kept, and as well as the trees, grassed areas and flower displays, they contain an excellent children's playground, a bar, a bandstand, an aquarium, sculptures, decorated fountains, seats for sitting in the sun or in the shade. On one side is a path overlooking the sea - Trani's war memorial is located there. At the port end of the gardens there is an arch leading up to a really stunning view across the harbour to the cathedral.

Trani's harbour area is a combination of marina and fishing port, and is the hub of Trani as a resort. On one side the waterfront is lined with restaurants, gelaterie and bars, so there are plenty of options for refreshment, especially in summer. We had a very decent meal at 'El Puerto', which offers a good selection of antipasti, pasta and meat or fish dishes at reasonable prices. Along the quayside, many  fishing boats tie up stern first and their owners set up stalls selling their catch.

In between the restaurants on the waterfront is the Chiesa di Ognissanti (All Saints), a 12th century Romanesque church of considerable character, once a base for the Knights Templar. Currently it is subject to a major renovation, so the east front and bell tower are covered up.

Beyond the harbour, on a slight promontory beside the sea, is Trani's cathedral, la Cattedrale di San Nicola Pellegrino (St Nicholas the Pilgrim, a Greek crusader who came to Trani in the 11th century,  not the same as the St Nicholas patron saint of Bari). It was constructed mainly in the 12th centuries, but incorporated a Roman catacomb dedicated to Saint Leucius and a 6th century catacomb, both becoming the crypt. The cathedral is Romanesque in style, similar to the English and European Norman cathedrals,  much plainer and simpler than the Baroque churches which predominate further south in Puglia.  But it is truly monumental in scale,  over 30 metres high (the adjoining campanile is 59 metres high), emphasised by its golden yellow limestone material. This is one of the greatest mediaeval churches in Europe.

The cathedral is usually open, with no charge, although you are asked to make a donation. The main entrance is up a double staircase, an unusual feature, but visitors usually enter underneath the staircase from the piazza in front, directly into the crypt, which is reputed to be the largest in Europe.

You then go up stairs into the main cathedral with its towering naves, columns, arches and galleries. The size and simplicity is overwhelming. A significant feature inside is the preserved original bronze door with 32 panels. There is also an impressive new organ, technical details of which are displayed near the entrance in the crypt.

However, if the cathedral is not open, don't be too disappointed - the outside is so dramatic that it makes the visit to Trani well worthwhile. It dominates the scene, and looks amazing from all viewpoints.

Opposite the cathedral is the Museo Diocesano, established relatively recently in the Palazzo Lodispoto mainly to display artefacts recovered from the cathedral when it has been renovated. This is much better organised than many other such museums, and is combined with a Typewriter Museum and various other facilities. It is open 9.30am-7.00pm but closed on Mondays, entry charge 2 euros.

The Trani Castello Svevo, one of the series of 13th century Puglian fortresses built by Frederick II, is close to the cathedral. It is an obvious and imposing bastion overlooking the sea, entered via a bridge over what was once a moat. The castle eventually became a prison, a use which ceased in 1974. It has been restored internally and open to the public since 1998. It is open 8.30am-7.30pm every day, unusually long opening hours in Italy; and entrance costs 3 euros (NB like many other public buildings and attractions, entry is completely free on the first Sunday of every month). We have not been inside, restricting ourselves to walking round the forbidding exterior - it is used mainly for commercial conferences and exhibitions, and also hosts 'The Dialogues of Trani', a literary, dance, theatre and film festival.

Behind the harbour waterfront, there is a network of traditional streets and squares. One point of interest in this area is the Scolanova Synagogue. Trani had a significant Jewish population for many years, at one point having four synagogues, but by the end of the 14th Century all Jewish citizens had been forcibly converted to Christianity and their religious buildings confiscated. The Scolanova is the oldest Jewish temple in Europe; known as Chiesa Santa Maria in Scolanova for centuries, it was de-consecrated in 2005 and returned to the Jewish faith.