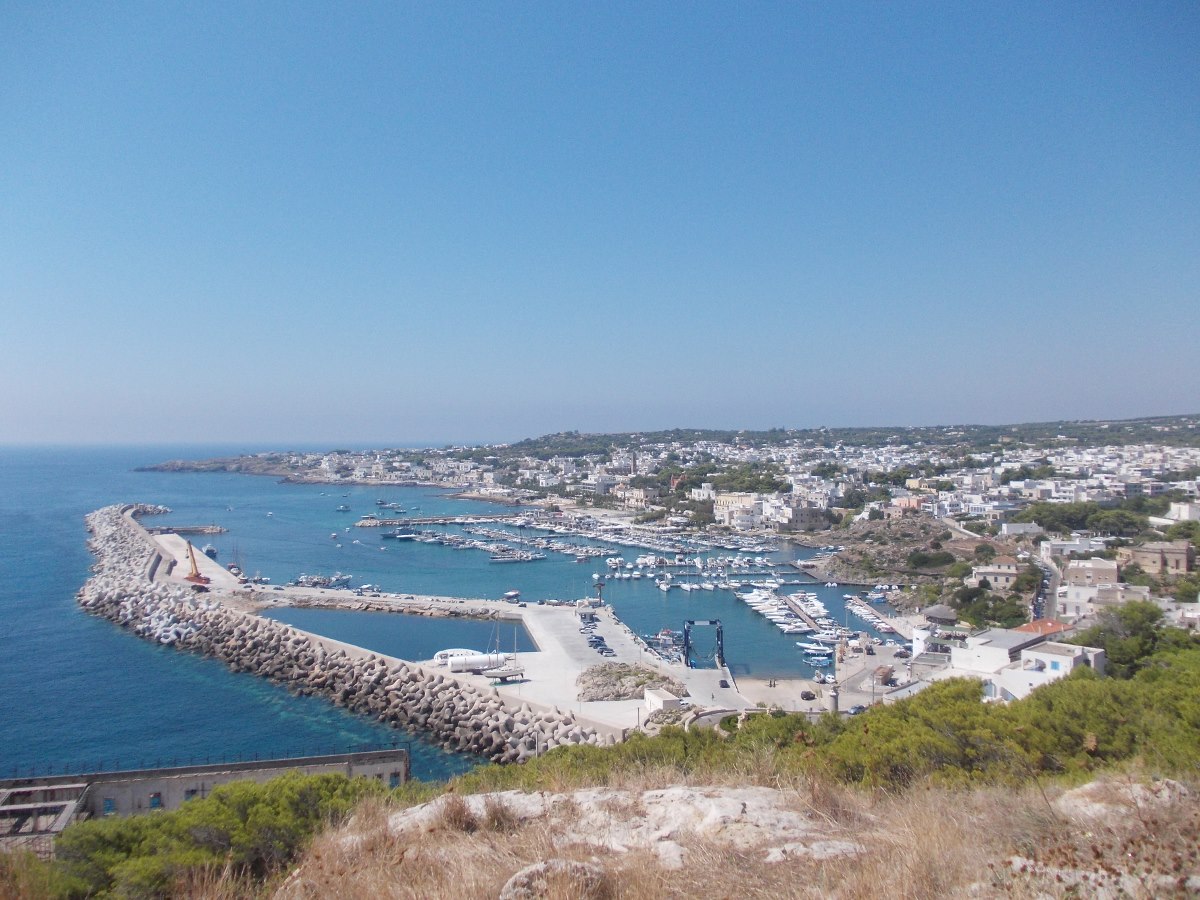 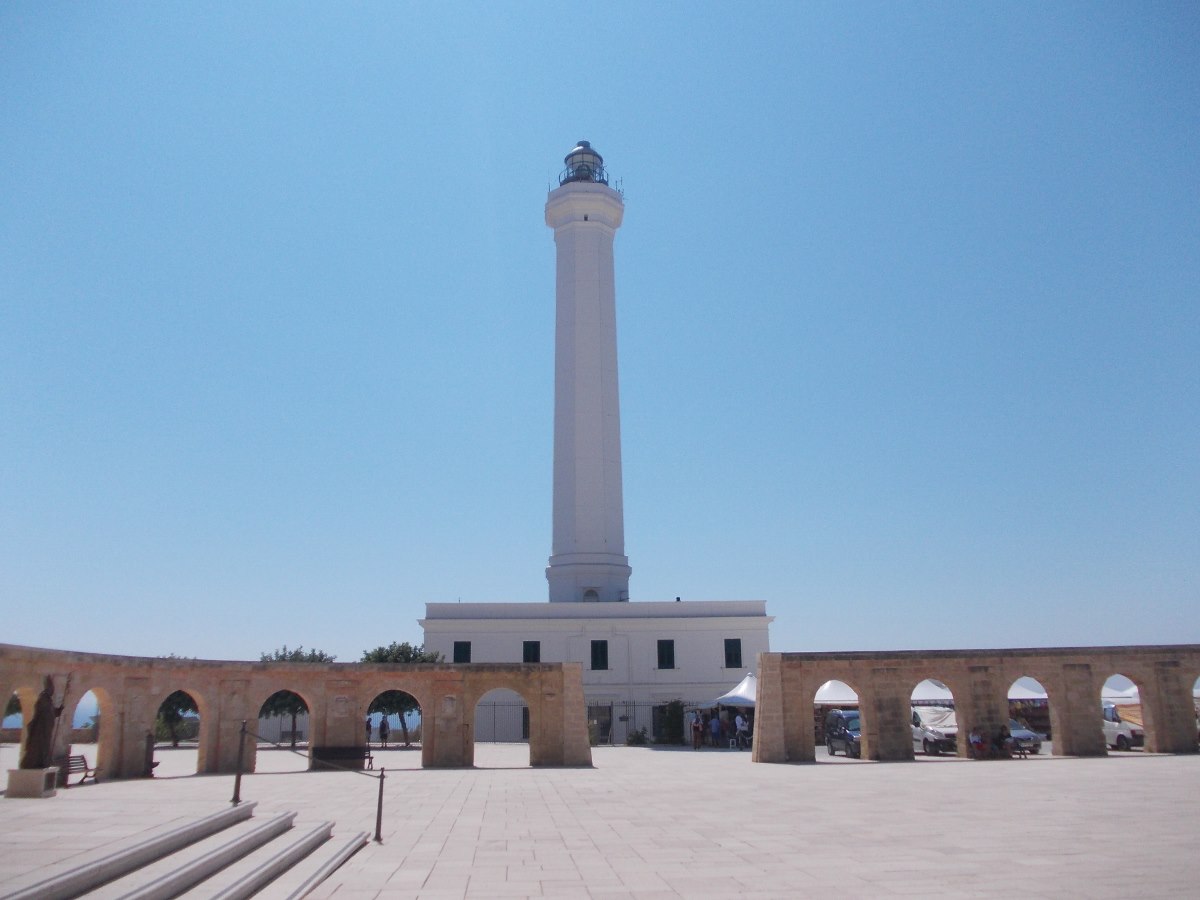 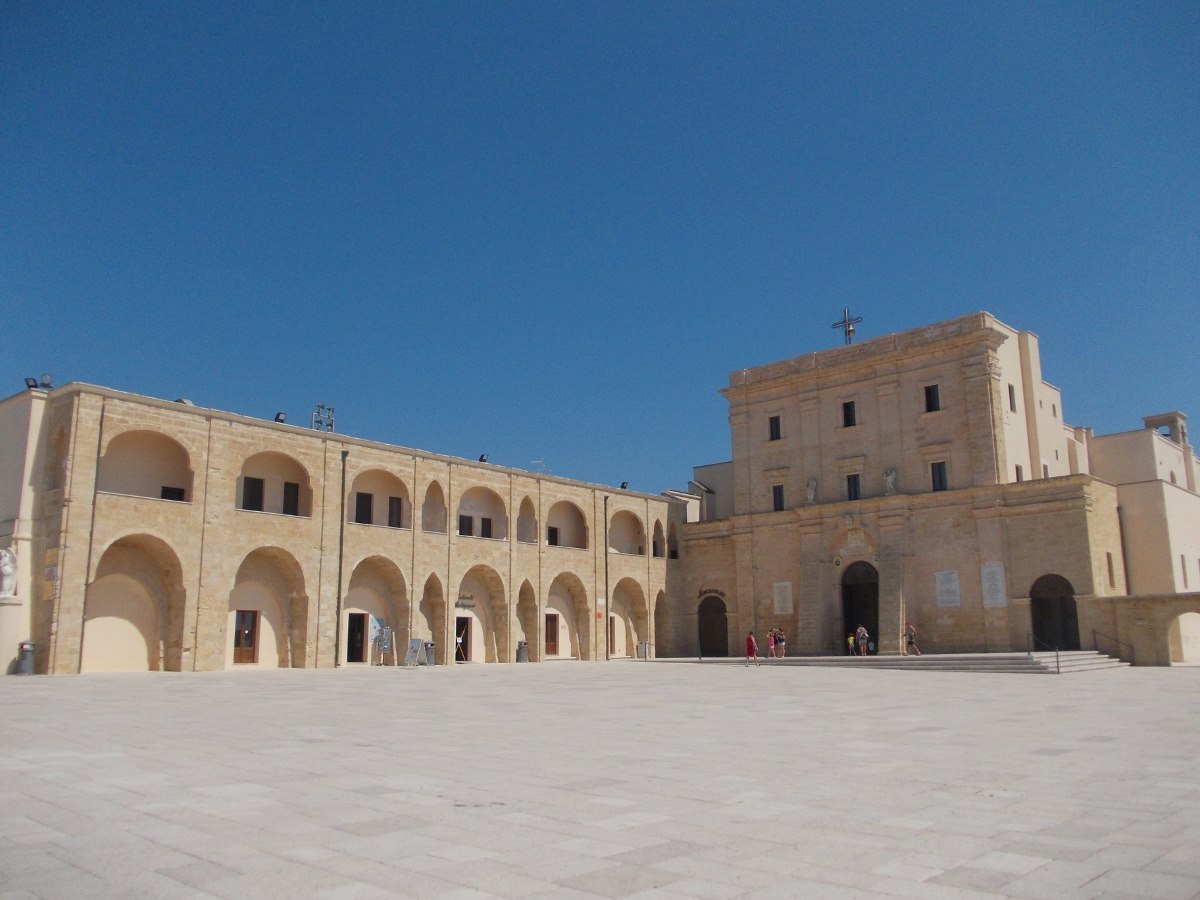 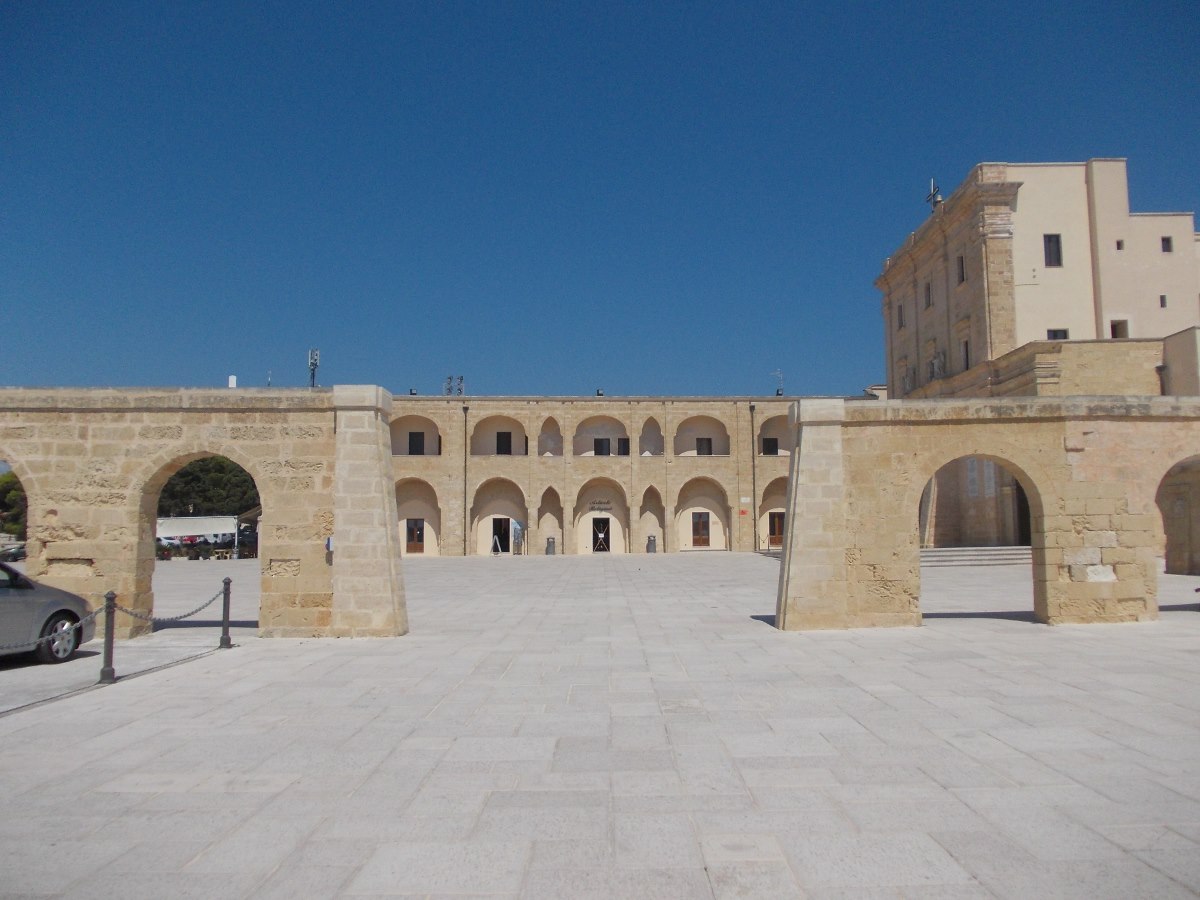 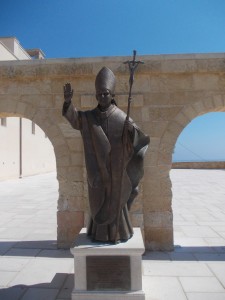 Santa Maria di Leuca is the southernmost tip of Puglia, where the Adriatic and Ionian Seas meet. Its location has meant that it has been of significance for thousands of years. The headland is marked contains an important lighthouse and the Basilica della Madonna de Finibus Terrae ('End of the Land'), a place of pilgrimage for centuries.

The Basilica was constructed on the site of the Roman Temple of Minerva. According to the myths, the temple crumbled to the ground when St. Peter landed here in Italy on his way to Rome. In the middle of August the statue of the Virgin Mary is taken from the Basilica and paraded through the streets, before being placed on a specially constructed boat and taken along the coast to Marina San Gregoria, before being transported back to the Basilica, celebrations being completed with a dramatic fireworks display.

The landmark that identifies Santa Maria di Leuca for miles around is Il Faro, the lighthouse, of octagonal design, almost 50m high, over 100m above sea level. Built in the 1860s on the site of a previous watch tower it is still in use today, and is one of Italy's most important lighthouses.

The juxtaposition of the lighthouse looking out to sea and the column topped by a statue of the Virgin Mary looking inland gives this spot a significant atmosphere in sunny weather but even more so when the sea is rough and the sky ominous. 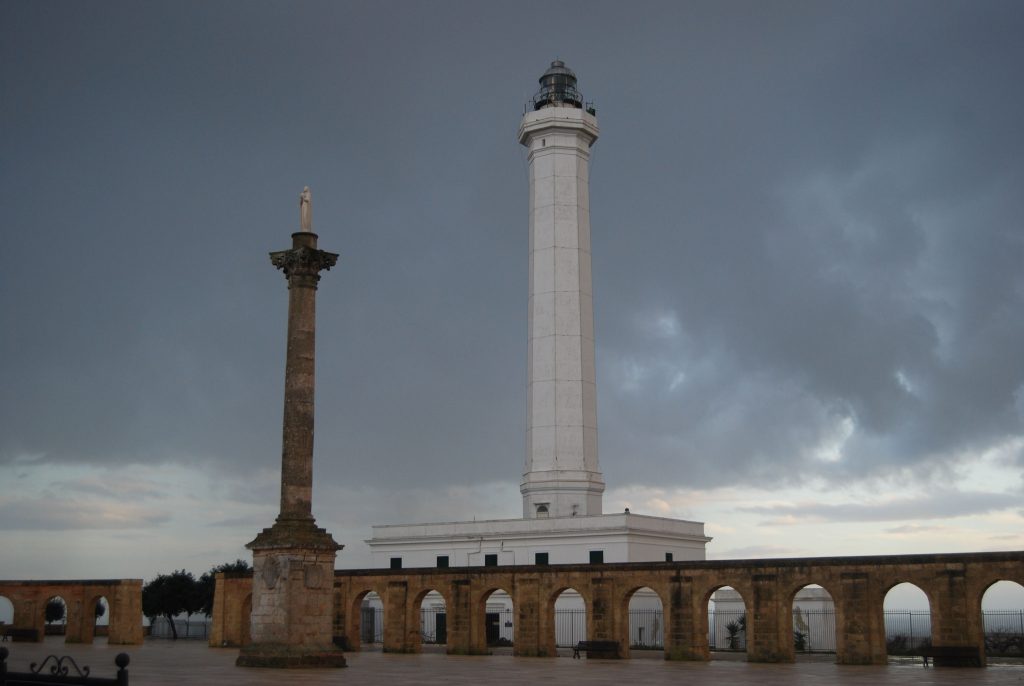 Santa Maria di Leuca is also the end point of the Acquedotto Pugliese, an immense engineering project almost a century in the making. After numerous delays and setbacks, it was finally completed in 1941. Mussolini required a dramatic finish, so here in Leuca was built a man made waterfall for the waters of the aqueduct to spill from, with a fake Roman column at the bottom and flights of steps on either side. You can walk up or down the steps - 300 of them. 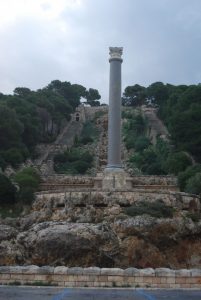 It is disappointing to see the course of the waterfall without any water! However, it operates for an hour at 10pm on summer Friday nights, when it is floodlit - we have never seen this but it should be good if you get the chance. Otherwise it only runs very occasionally.

The promontory where the Basilica and the lighthouse are situated is very popular with visitors of course; there is a lot of car parking space but this gets pretty full in summer. when there are also  stalls selling various gifts and other wares. There is a cafe and food is available. The promontory overlooks the resort area of Santa Maria di Leuca and its associated marina; you can drive down or walk down the Aquedotto steps.

The town was a popular holiday destination for rich Italians for a long time. It was really just a village around the church of Christe Re, still a key landmark. However, its main period of development came in the years after 1874, when Guiseppe Ruggiero, a well known engineer, bought some fields along the shore and decided to build a resort. He started by designing and constructing a villa for himself and his family - the Villa Meridiana, named after a sundial feature over the front door; this is now an important historical feature on the lungomare (promenade). He went on to design a series of villas for rich and fashionable clients, in all kinds of styles, including classical, Moorish and renaissance. These, together with the promenade and viewpoints constructed along the seafront, give the resort an elegant and restrained air which persists to this day. 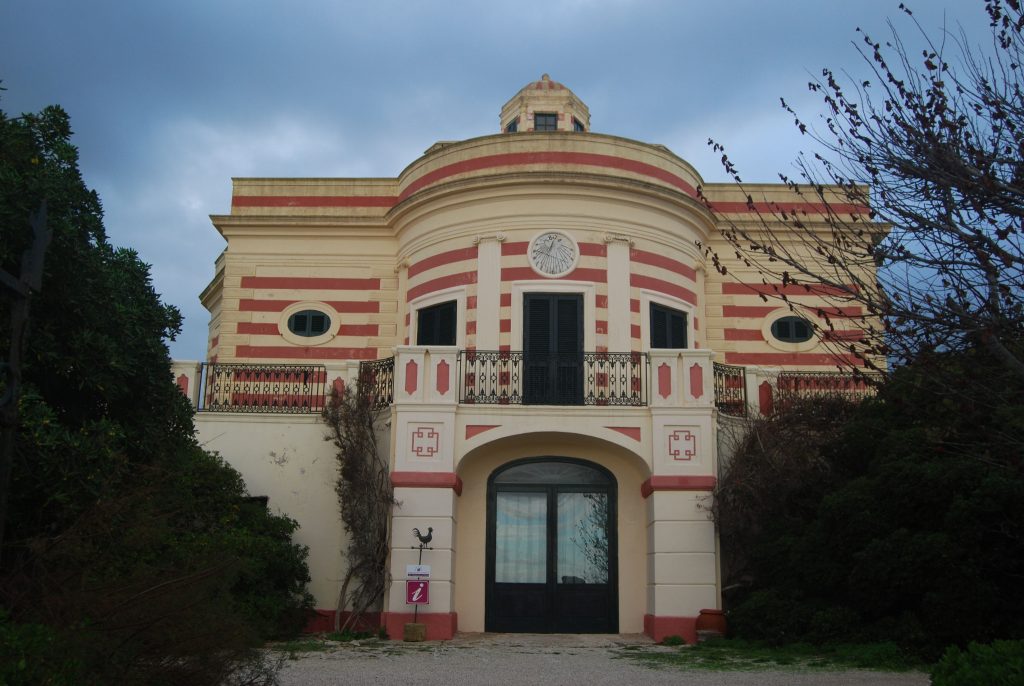 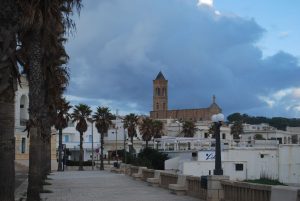 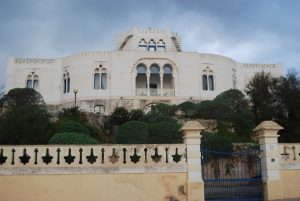 As well as the numerous sandy beaches in the area surrounding Leuca, there are many hidden caves amongst the rocky parts of the coastline, such as the Grotta Porcinara and Grotta dei Diavolo. Boat trips are available from the promenade and the marina (home to visiting sailing and motor yachts) to discover these and other features of the coastline. There are several excellent quality restaurants on the promenade, right on the beach and over the water's edge. These only operate in the summer season. However, there are other good places to eat and drink just inside the promenade, these are open all year round.

Although Leuca is at the very tip of the Salento Peninsula and a long way to travel from most other places in Puglia, it is well worth a visit, just to say 'you've been there'. There is a dual carriageway road until just south of Maglie. To get there by public transport is a challenge! - we personally know it can be done with planning and patience, anyone who needs more information/advice should contact us, we will be pleased to assist.