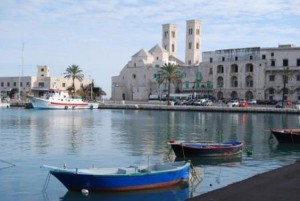 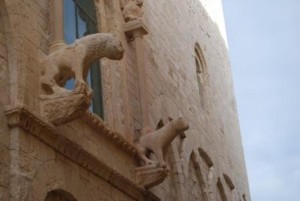 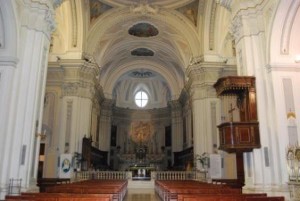 Molfetta is one of the series of coastal towns on the road and railway routes north west of Bari - Giovinazzo, Trani, Biseglie  and Barletta are the others. It is a large town (population 65,000), but its historic centre (Centro Antico) and port area are very compact, and well worth a visit if you get an opportunity. It is similar to Trani but on a smaller scale.

Historically, Molfetta mainly developed as a commercial centre under the Swabians, Aragonese and Angevin rules. It was a major stop off for pilgrims on their way to the Holy Land which increased its prosperity, It has two cathedrals - the old Romanesque Duomo dating from the 11th century, and the newer Baroque Santa Maria Assunta, which took on the cathedral title in 1775.

Head initially for the Piazza Municipio, where you will find a Tourist Information Office providing a map and useful information. It is open every day, but usually shuts in the afternoon. The Piazza Municipio is an attractive small piazza, occupying the site of the former castle, destroyed in 1416, which was part of the walls of the old city. The Municipio itself is housed in a former palazzo with a beautiful Renaissance frontage, and there are other interesting historic buildings around the piazza.

The neat Centro Antico, also known as San Andrea, has buildings dating back mainly to the 16th century, although some churches were founded in the 11th and 12th centuries. It is on what once was a small island, now a peninsula, so is quite distinct, separated from the rest of the town and the nearby port area by the Corso Dante Alighieri and the adjoining Piazza Mazzini. The Centro Antico was largely derelict 40 years ago, and is just beginning to emerge from a massive programme of renovation. The cleaned up buildings and repaved narrow streets give a clean, light and airy appearance.

The streets are flanked by the traditional palazzi of the old nobility, and by churches, and are a delight to wander round.  Most of the regenerated buildings are now being occupied as residences, business premises and occasional studios etc - this is definitely not an area dominated by tourist shops, bars and restaurants, of which there are only a few. Unusually for such a historic centre, the redevelopment has incorporated three small garden/sitting areas, one of which has some playground equipment to keep children amused.

The street layout is straightforward - the Via Piazza running through the middle from the arched entrance on Piazza Mazzini, other streets on either side in what has been described as a herring bone pattern, with streets round the perimeter - although the perimeter itself, overlooking the sea, is largely composed of buildings which made up the old walls.

The main building in the Centro Antico is the imposing Romanesque Duomo, dedicated to the patron saint of Molfetta, San Corrado di Baviera, whose bones are on display. The Duomo was originally constructed in the 11th century but extended and modified extensively afterwards. It has two very distinctive towers (one a bell tower, the other a watch tower) and three different shaped domed cupolas. The site overlooking the sea and the large port area allow it to rival the cathedral in Trani as a coastal landmark. Internally it is traditionally austere, with three naves; side chapels date mainly from the 15th and 16th centuries. The columns and chapels are decorated with interesting carvings of animals and plants; and also on display is a 12th century font.

At the far end of Via Piazza is the Torrione Passari. This is a strange combination of noble residence and military defence. It mainly consists of a round fortified tower sticking out into the sea. Part of the Torrione is usually open to the public - other parts, like the rest of the regenerated historic centre of Molfetta, are used as residences. Entry is free but you are invited to make a small donation. Go to the top of the tower for a view over the sea and the port (also to Trani and Giovanezzo). Downstairs chambers are used for temporary exhibitions by modern artists.

As well as the Romanesque Duomo in the Centro Antico, Molfetta has a Cattedrale, located close by on Piazza Mazzini. Dedicated to Santa Maria Assunta, it was constructed in Baroque style in the 17th and 18th centuries, with cathedral "status" transferred there from the old Duomo in 1775. Its original Jesuit connections are illustrated on the enormous facade by a statue of St Ignatius Loyola. Internally there is the typical Baroque elaborate decoration, with altar paintings by local artists. The organ is especially impressive.

Next to the Cattedrale is the Museo Diocesano, open Saturday and Sunday, 10am-1pm and 5.30-8.30pm; Tuesday to Friday groups who have booked in advance can have guided tours.  Entry charge is adults 4 euros, reduced rates for young people etc 2.50 euros. The museum contains an archaeological collection with local Neolithic and pre-Roman material; a display of religious vestments and objects including the traditional statues featuring in Molfetta's elaborate Holy Week processions; a massive Library of the Episcopal Seminary, built between 1837 and 1844, which holds approximately 47,000 books (this is probably the most interesting feature); and an art gallery of work by sixteenth and eighteenth century artists. .

Southwards of the Centro Antico peninsula lies a long promenade by the sea, northwards an especially large enclosed port area. This latter is commercially very important, especially for fishing boats - Molfetta is the main fishing port in this part of Italy. Close by is an enclosed fish market, usually busy until midday, where you can see experienced buyers negotiating over all varieties of "frutti del mare".

Behind the Banchina (quayside) are networks of streets containing various churches, small squares, shops, restaurants, bars and public buildings.
The main building of note in this area, in a street just off the Banchina, is the Complesso (complex) di San Domenico, a church and monastery built in the first part of the 17th century. This has recently been fully restored, and contains the public library and art gallery. Inside the church there are rich decorations (including a carved wooden pulpit) by 18th century artists, but the main doors are a modern work in bronze by a local sculptor.  In the cloisters is located the Molfetta Museo Etnografico del Mare - a museum devoted to the sea, fishing, boats, boatbuilding and marine technology, run by enthusiastic local people with connections to the sea.

Molfetta is easy enough to reach by road and rail from Ostuni, and also makes a convenient place to visit when travelling to or from Puglia. It is well served by trains between Bari and Barletta. If you come by train, walk straight ahead from the station along the partly pedestrianised Via Umberto I, with elegant shops, bars and cafes. This leads directly to the enclosed town park at Piazza Garibaldi, where you turn left and will see the port area, Cattedrale and entrance to the Centro Antico at Piazza Municipio - about 10 minutes walk from the station.

There are plenty of places to eat in Molfetta, but not many in the Centro Antico itself - so look along the Banchina and in the streets leading off it. Two recommended restaurants  close to the Centro Antico are Dentro La Mura on Corso Dante and La Tavernetta on Via Picca.

The authorities in Molfetta are working hard to promote the town as a year round visitor attraction, and organise various events, exhibitions and activities. One highlight is on 8 September each year, the colourful Festa della Madonna dei Martiri, which involves a statue of the Madonna being carried on fishing boats in the harbour.  Molfetta is also well known for a series of religious processions leading up to Easter (especially on Good Friday and on the preceding Friday), which feature effigies, traditional local music and musicians etc.