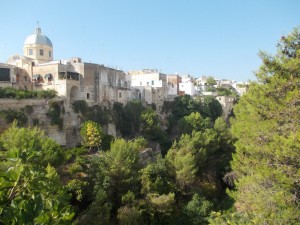 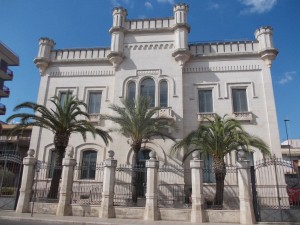 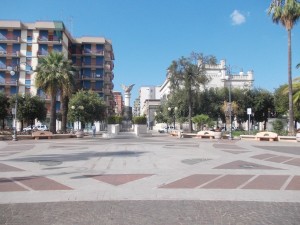 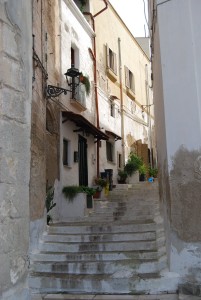 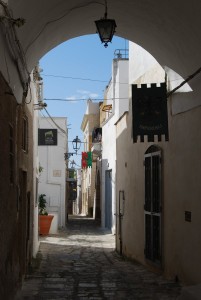 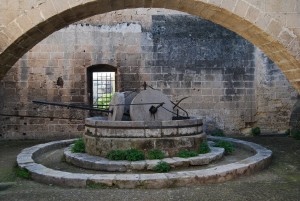 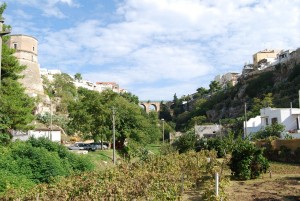 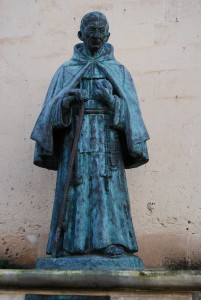 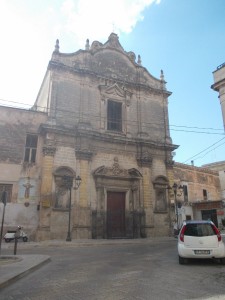 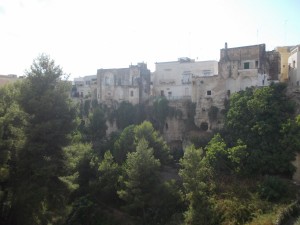 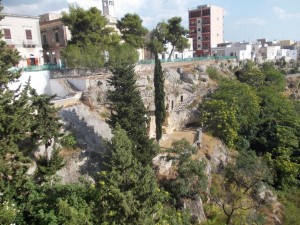 North west of Taranto, along the main road and railway line towards Bari, is an ugly zone of heavy industry, factories, storage depots etc. After about 10 km, an imposing castle and the dome of a cathedral can be seen on a hillside overlooking the ribbon of road, rail and industry. This is the city of Massafra.

We seriously recommend you take time to visit if you are passing  and get the chance. (It might be a convenient stop on a trip from Ostuni to Matera). We ourselves have stayed here overnight and can recommend a truly stunning place to stay if requested. There is a railway station served by trains between Bari and Taranto, roughly hourly; it takes about 10 minutes walking from the railway station to the old town, across a main road and then uphill, quite straightforward in daylight, but don't arrive at night unless you know the way from a previous visit.

Massafra was allegedly originally settled by refugees from the Roman colonies in Africa, later it came under the rule of the Lombards and then the Normans. Uniquely, it is split in two by a deep, narrow, wooded ravine, the Gravina San Marco. Caves in the side of the ravine and under the present town were inhabited until mediaeval times, and there are several rupestrian (cave) churches; some of these can be visited via organised tours - at Christmas there is a Presepe Vivente (living crib) taking place in them. You can walk along a path at the bottom of the Gravina San Marco but it is overgrown and not very well maintained unfortunately.

The Gravina San Marco separates the "old" and "new" towns - the former is sometimes called  Terra, the latter Santa Caterina. It is spanned by three bridges, the key one being the middle one, Ponte Vecchio. This is used by pedestrians and vehicles, and offers a spectacular view of the Gravina San Marco and the two parts of Massafra, with the old town dominated by the dome of San Lorenzo.

On one side of the bridge is Piazza Garibaldi, the heart of the old town. There is a tourist information office run by a voluntary organisation in the short stretch of street between the Piazza and the bridge, stated opening hours 9.30-12.30 and 15.45-18.00, but we have found these to be unreliable. There is a website however, and this gives a lot of information about organised tours, events (of which there are a number of interest, so if you plan to visit Massafra, check up on what is happening).  http://www.massafraturismo.it/

Piazza Garibaldi contains the old clock tower and various other civic buildings. It is surrounded by the narrow streets of the old town, some of them pedestrianised.  Massafra old town is a largely residential area, most of the streets are used by cars and are tarmaced, which makes just wandering around the streets less pleasant than is the case in many other places.

From the Piazza Garibaldi, head east along the attractive narrow pedestrianised Vicolo Lo Pizzo to reach the Castello after about 200 metres. This originates from the 10th century but was mainly constructed under the Normans, a quadrilateral structure with three fortified towers. It is best viewed externally; you can go into the internal courtyard, there is no charge, the building accommodates the municipal library.

A short distance along the streets to the west  of the Piazza Garibaldi is the Duomo di San Lorenzo Martire, the dome of which is prominent in the old town. This enormous church is quite modern, constructed in the period 1853-1931. Its light and airy interior contains a number of altar pieces and statues which have come from older churches in the area.

Head south from the Piazza Garibaldi and you will immediately encounter the church of the Convento di San Benedetto, built in the early 18th century. A little further through the narrow streets is the Santuario di Gesu' Bambino (one of only five churches in Europe dedicated to the "Divine Child"), built in the 19th century in neo classical style, with a pair of small domed towers. Two interesting bronze statues are on either side of the door.

Beyond the Santuario, the narrow streets become steeper and in some cases are stepped as you drop down into the Gravina Madonna della Scala. Despite its name, this is not a ravine, just the side of the hill on which Massafra is built. The vista is bleak - industrial buildings and a lot of dereliction. However, in this unattractive area, tucked into the steep side of the hill,  are some important Massafra churches. If you get to the rough road at the bottom of the slope and turn left, you will come to the 17th century Chiesa Madonna della Grazie; a little further on is the enormous baroque frontage of  the 16th century Chiesa di Sant'Agostino, part of a large convent;  and the 16th century Antica Chiesa Madre, which has such a military appearance that some think it was originally meant to be a fortification.  Beyond this point there are some wide steps taking you back up into the old town, or alternatively you can walk across the bottom of the Gravina San Marco into the Santi Medici quarter, where you get especially fine views of the Castello.

From Piazza Garibaldi you can reach the "new town" of Massafra by crossing the Ponte Vecchio.  The new town comprises a mixture of 19th century and more modern buildings on a gridiron street pattern. The modern building here have been particularly well designed and integrated; they contribute to a generally pleasant feel to this extensive area. The bridge leads directly into Corso Italia, across the large Piazza Vittorio Emanuele and then Corso Roma. This is Massafra's main shopping street, and one of the few streets largely pedestrianised.  Corso Roma is about 600 metres long, and is thronged with people in the evening.

By turning right (south) immediately after you cross the bridge, you enter the narrow streets of the Santi Medici area, which drop down in steps along the side of the gorge. This is one of Massafra's most attractive areas, with views across the Garvina to the old town; and also where you will find a couple of good restaurants. The Chiesa di Santi Medici was finished in 1720. The area is the focus of the festa di Santi Medici (27-29 September).

A stroll round the old town of Massafra as described takes a couple of hours at most, but many visitors with only a limited amount of time will probably skip the visit to the churches in the otherwise uninteresting Gravina Madonna della Scala.

If you wish to see the rupestrian churches in the Gravina San Marco, you will need to arrange this in advance via  the Nuova Hellas Massafra Tourist Office http://www.massafraturismo.it/dove-siamo/ (cost is 10 euros, it takes about two hours and involves a bit of clambering).

One of the most well known places in Massafra is Santuario Madonna della Scala,  which is located about 3km north of the old town centre so cannot be easily combined with a walk in the middle of the town. This is a large baroque church in the bottom of the Gravina Maddona della Scala, built  in the early 18th century on the site of an older chapel which was a focus for pilgrims visiting the place of a miracle. To visit the church, you have to go down and up 125 steps.

If you want to have a meal in Massafra, it is a good idea to get some information in advance. It is not a place which gets a lot of visitors and so there are not many obvious restaurants, even in the main streets and squares;  and they are not necessarily open. If you are in Piazza Garibaldi, there is a popular pizzeria called Paulo's a couple of minutes walk beyond the Convento San Benedetto along Via Fanelli. If you are on Corso Roma, we can particularly recommend a lively pizzeria Pikepa (closed Tuesdays), which is on Via Lamormara, the second street paralleling Corso Roma.