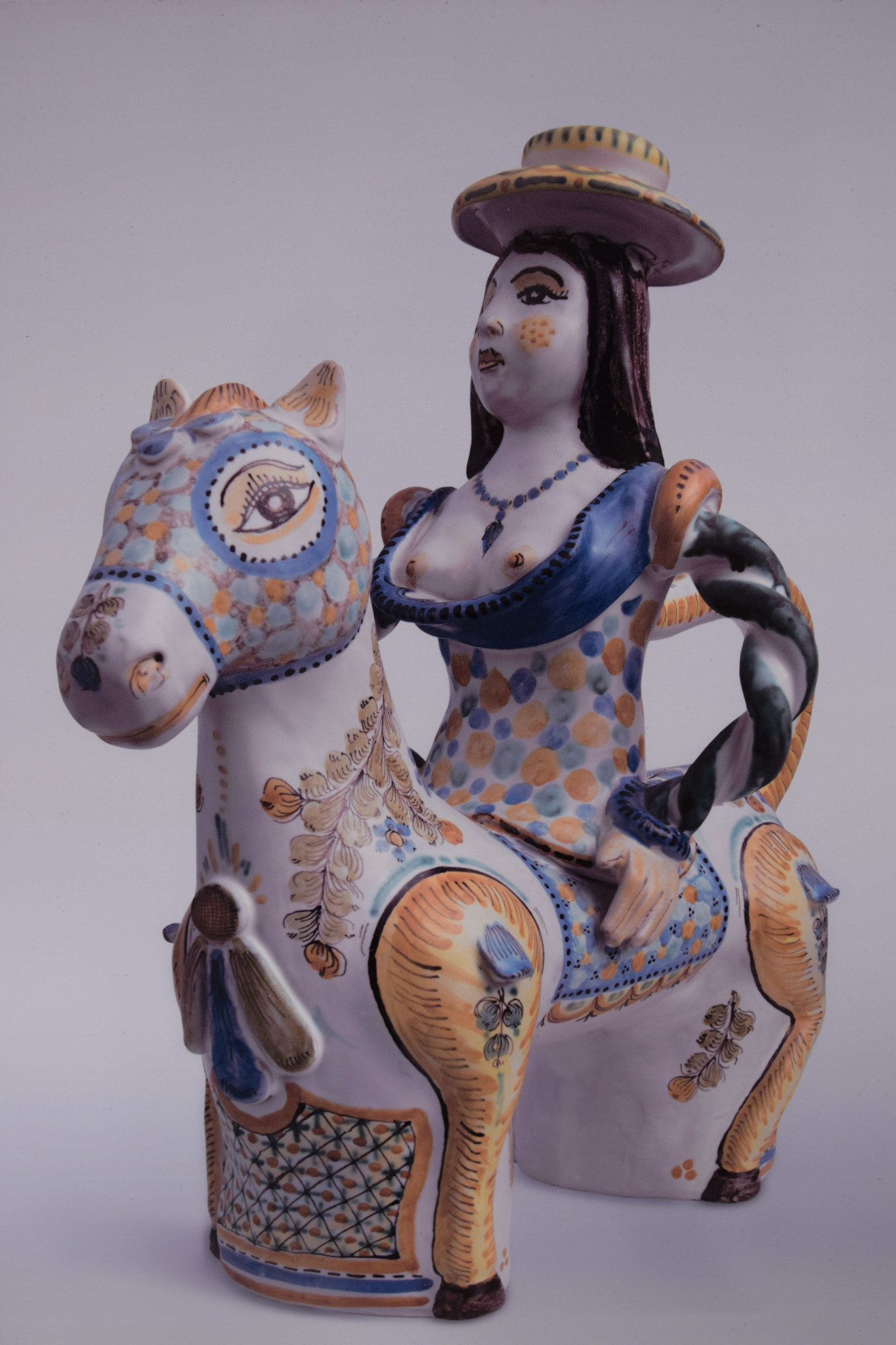 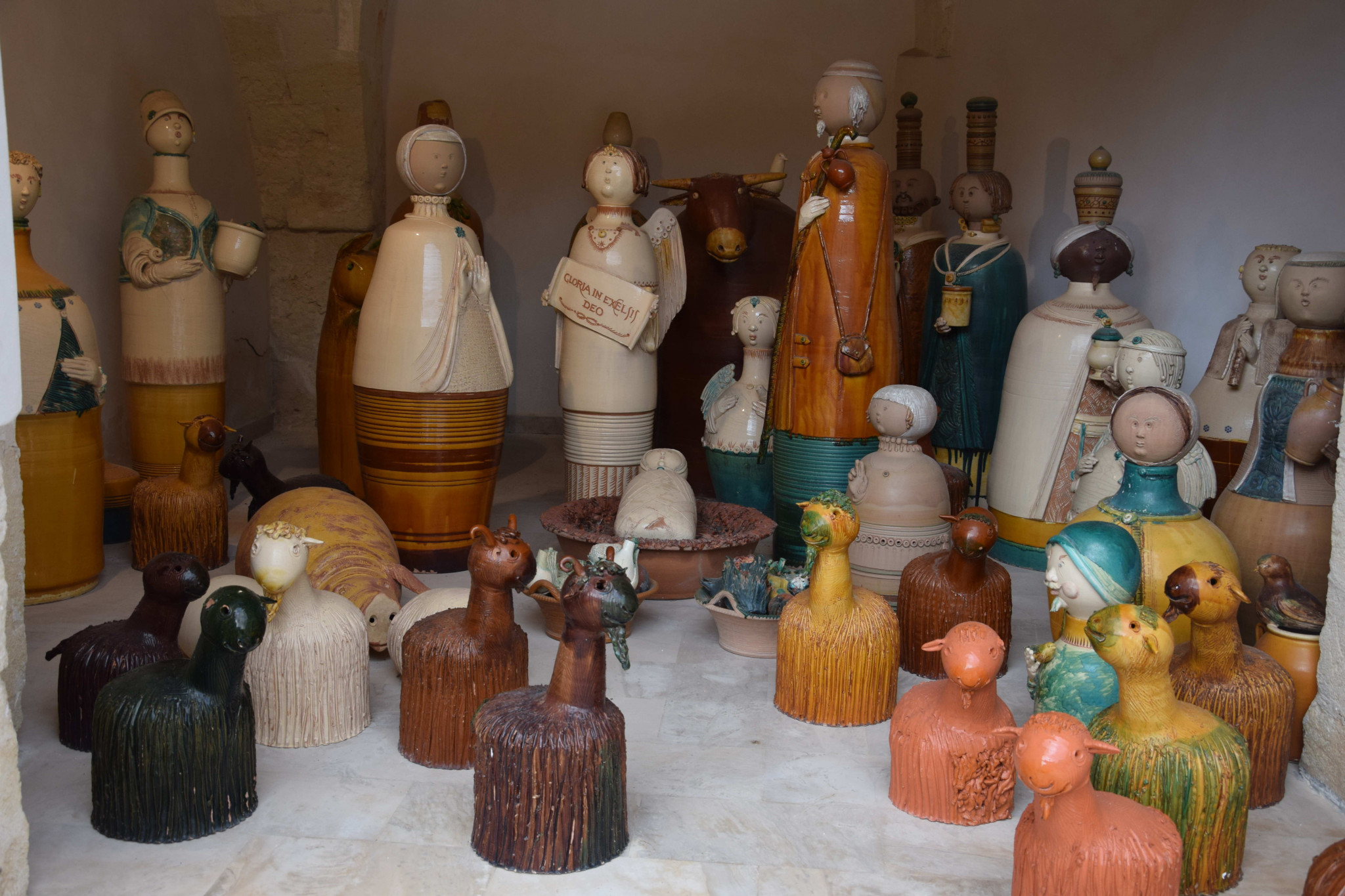 Grottaglie is located south of Taranto on the edge of an escarpment overlooking the Ionian Sea. It is surrounded by numerous ravines - in fact the town's name comes from the Latin 'cryptae aliae', which means 'many ravines'. The caves within the ravines provided protection from the various invaders over the centuries, until the 13th-14th Centuries, when more permanent structures and fortifications started to define the town.

In Puglia, Grottaglie is synonymous with ceramics. It is one of about 30 Italian towns allowed to use the official designation Citta di Ceramiche; it also has the distinction of a European Union Denominazione di Origine Protetta (DOP) for its ceramics production - so Grottaglie's distinctive ware cannot be made anywhere else. 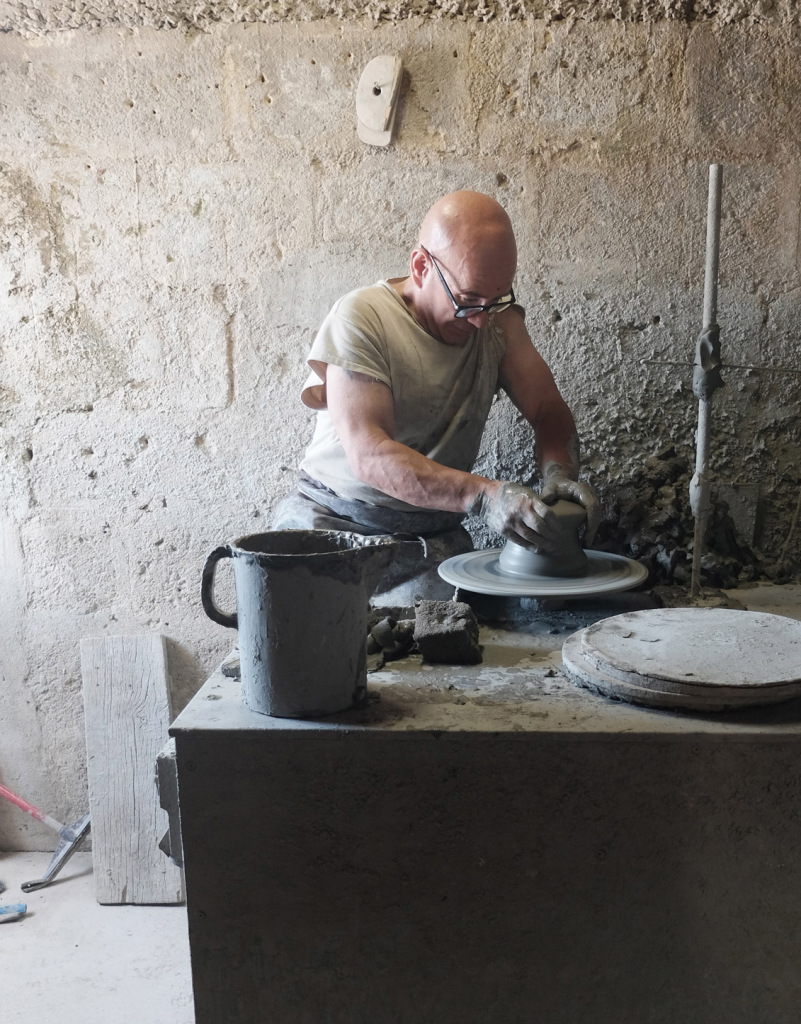 For over 1000 years, pottery workshops and kilns operated in the caves and crevices of the ravine (Ravina San Giorgio) below the site of the castle. Red clay and other raw materials were readily available locally; and there was a constant demand for containers for water, wine and olive oil. The industry has continued to the present time, represented by over 50 pottery workshops and ceramics artisans, most of them concentrated into the small area known as the Quartiera delle Ceramiche on the line of the original ravine. 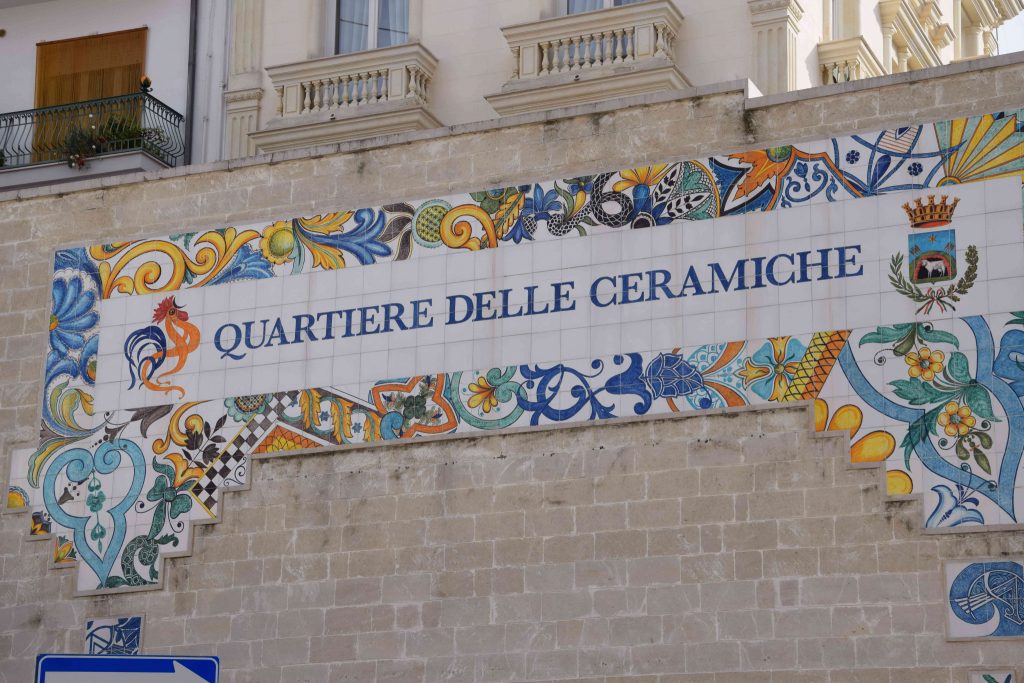 Family businesses (including several branches of the Fasano family) mainly established about 100 years ago, with skills and operations handed down through the generations, these workshops and associated displays/retail outlets constitute one of Puglia's major visitor attractions. The town is also an important focus for commercial interests, education and research related to ceramics and design. 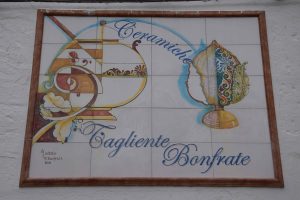 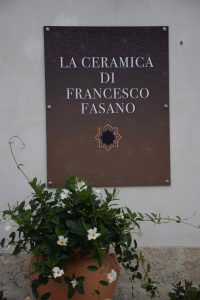 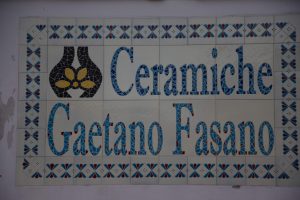 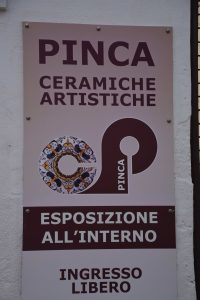 Grottaglie pottery was originally essentially functional, mainly earthenware utensils. From about 200 years ago a distinct style emerged as a manganese mid brown paint came to dominate the production of a wide range of containers (a double handled amphora with a lid was an especially characteristic product). These are still produced today, but mainly for ornament and display purposes - no Puglian outlet for wine or olive oil seems complete without one. 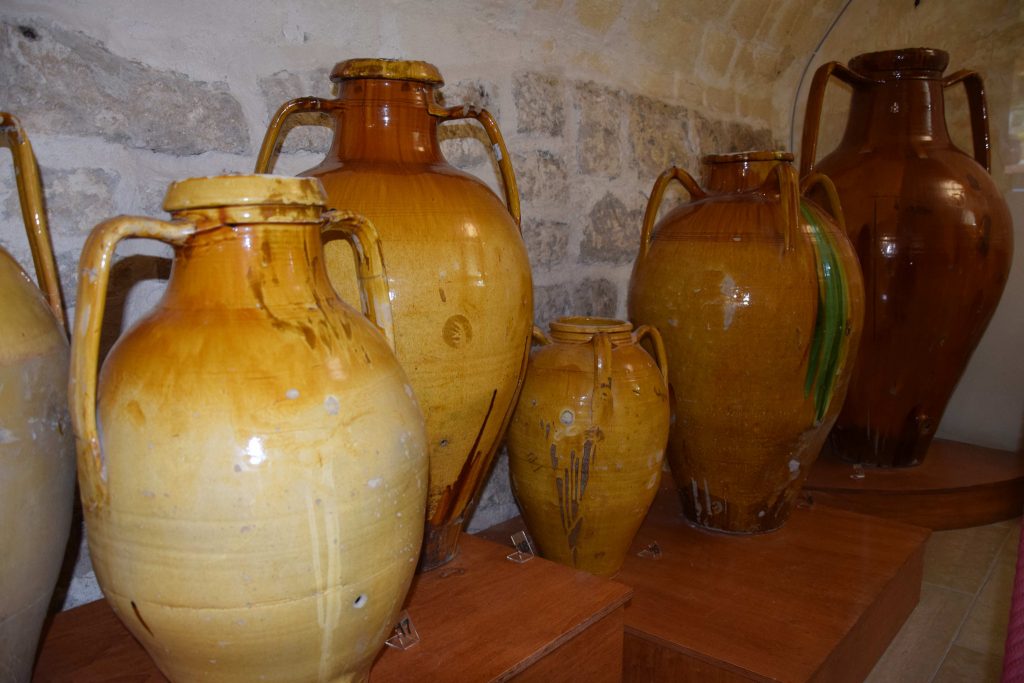 However, alongside these developed a distinctive strand of ornamental ceramics, using painted decoration on white glazed surfaces, featuring especially a turquoise floral pattern. These decorative ceramics are predominant today - a mixture of tableware (widely used, you will see it in most restaurants) and articles for ornamental display, including tiles, dolls and pumi (see below). The weird dolls usually relate to local traditions and folklore. There is particularly famous one featuring a woman, often on horseback, with a moustache; of which you will see countless examples on sale. 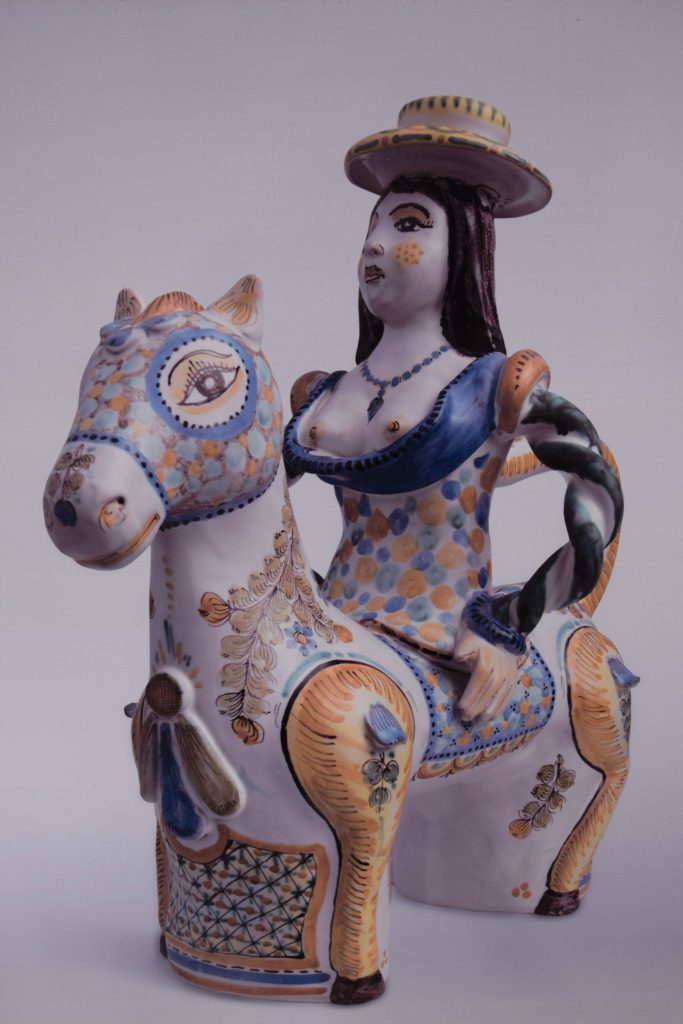 There is also now a well established school of fine art ceramics in Grottaglie, with artists studios mixed in among the pottery workshops. This is supported by exhibitions and competitions. 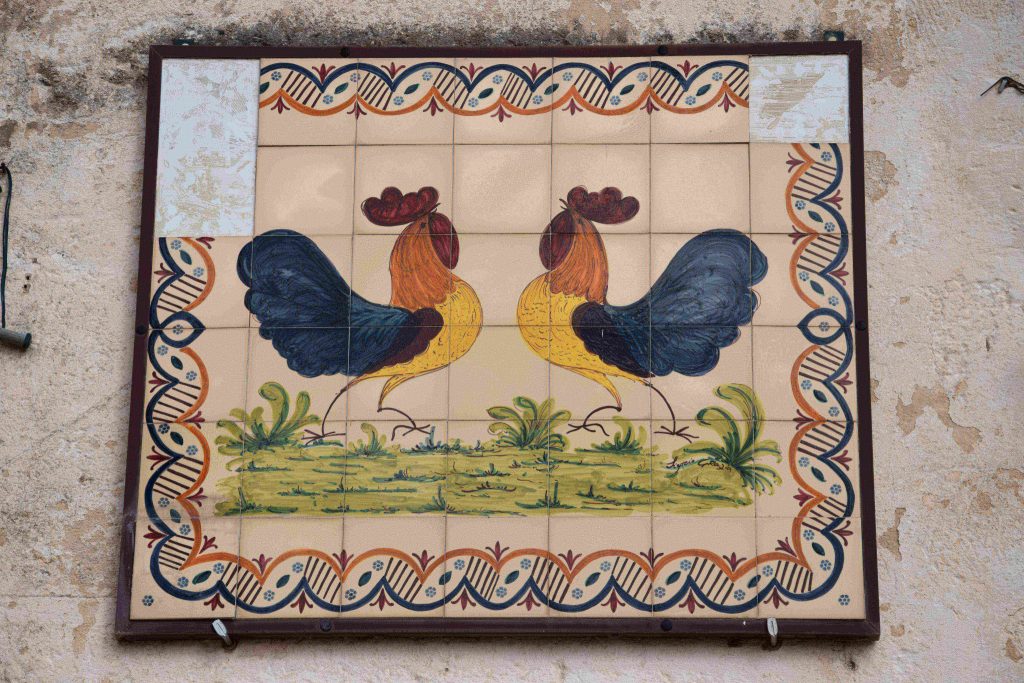 The Castello Episcopio dates from the 13th century but has been considerably altered and enlarged at various periods, the main structures date from the 15th and 16th centuries. It was for centuries the home and defensive base of the powerful Bishops of Taranto, who were given jurisdiction over this part of Puglia  (hence the number of elaborate palazzi and religious buildings in such a small town). It now functions as the Museo della Ceramica - the Ceramics Museum.  This is open 10am-6.00pm every day and costs 4 euros, The ticket office just inside the gateway also serves as a general Tourist Information Centre for Grottaglie and Puglia generally. The museum is worth a visit even if you are not a pottery enthusiast. It is not very "heavy" in terms of information presented - it really lets the exhibits speak for themselves. Some of the pieces are displayed in the impressive courtyard of the castle; most of them are in the ground floor rooms surrounding the courtyard (these used to be the stables of the castle). Examples of Grottaglie pottery from  the 8th century BC through to the present day can be seen. The emphasis is on more recent decorative works, including a number of modern presepe - nativity scenes - which are generated by an annual competition among ceramics artists, sponsored by Grottaglie City Council  since 1980. Right opposite the castle entrance you can see the collonaded Mediteranean garden which belongs to the Villa Vestiti, a privately owned ceramics gallery and workshop. In 2008, when part of this garden was being tidied up, workers discovered the floor of a Roman villa and a Byzantine crypt with beautiful frescoes. It is possible to see these discoveries by arrangement, if you are interested then you can contact the Tourist Information Centre - we have not as yet done this. The centro storico of Grottaglie is a small area of narrow streets and pleasant spaces sloping gently downwards from the castle. The streets are not pedestrianised, but traffic is limited. The buildings on either side are generally grand palazzi, with decorated frontages, doorways, windows and balconies. This reflects the significance of Grottaglie 200 years ago. 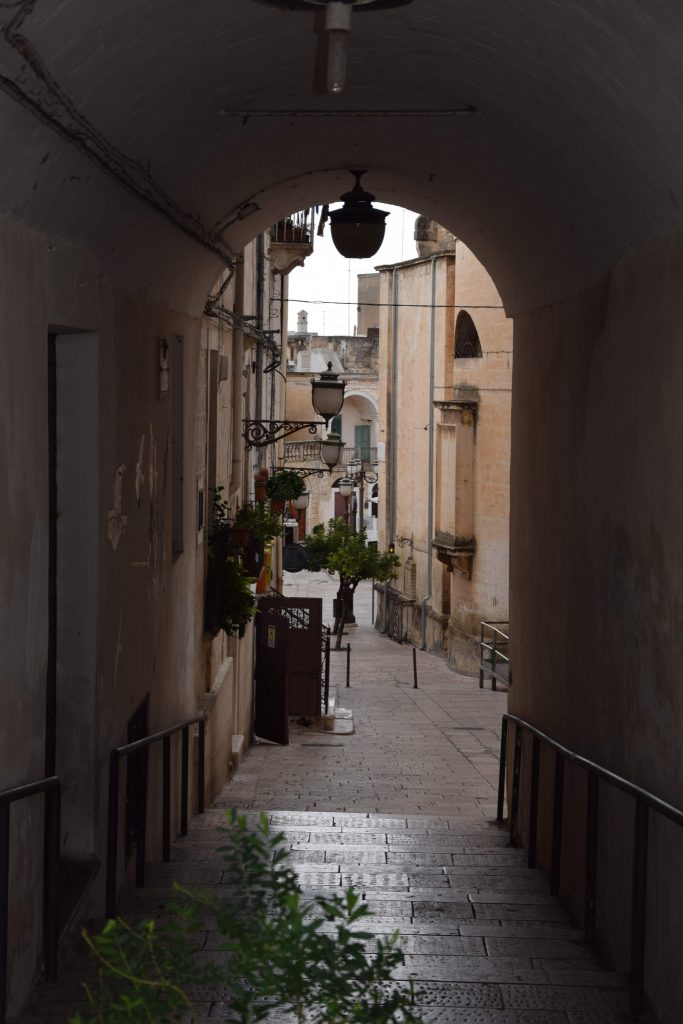 A particular feature is the number of pumi which decorate each side of the many balconies. The pumo is a characteristic product of Grottaglie - a ceramic representation of an upturned bud, to bring luck and ward off evil. They will be seen on the corners of a few balconies in towns all over Puglia, but in Grottaglie they are everywhere. In a small piazza in the middle of the centro storico stands the Chiesa Matrice, Mother Church (Maria Santissima Annunziata). This dates from 1372, the work of architect Domenico di Martina in Romanesque style. The frontage is decorated with beautiful carvings of animals, plants, saints etc; and a round window with decorated frame. The church was extended in subsequent centuries, including the addition of a dome tiled in multi-coloured maiolica. Inside, the style is elaborately decorative baroque with many works of art - the main one in the 17th century chapel dedicated to San Ciro, a painting of the Madonna of the Rosary attributed to De Matteis. The Chiesa del Carmine, on the edge of the centro storico, is mainly famous for a polychrome painted stone carving of the nativity scene, produced in 1530 by the Puglian sculptor Stefano di Putignano. This work stimulated the modern annual competition to design a ceramic nativity scene.

Grottaglie is about 45 minutes drive from Ostuni. (It can also be reached by rail and bus, but the services are slightly awkward - we can give specific advice if needed).

The Quartiera delle Ceramiche and the Museo della Ceramica inside the castle are the things which really make Grottaglie worth visiting. There is a large adjacent car park. The ceramics workshops welcome visitors and do demonstrations for adults and children. If you are visiting these then it is worth a short walk down from the Castle/Museum to see the centro storico. If you have an interest n ceramics, then Grottaglie is a must. Even if you are not especially a fan of ceramics, then it is an inteersting place to visit, especially in summer when there is a lot going on. But for anyone with no interest in ceramics we would suggest Grottaglie is not somewhere to be high on a list of places to visit in Puglia,

There are a few places to eat and drink, including several slightly swish ones in the Quartiera delle Ceramiche and in the centro storico. If you are looking for somewhere more local and "authentic", we can recommend the trattoria "All Nchianata" on at no. 60 Via Ennio - excellent food, cheerful atmosphere, brilliant value. About 5 minutes walk from the castle.