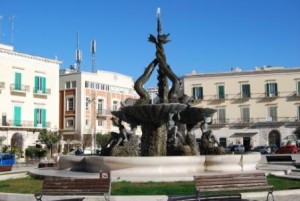 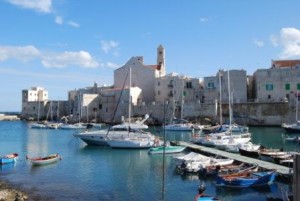 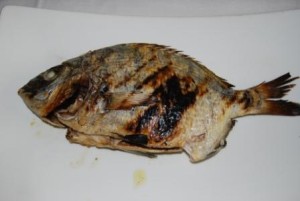 Giovinazzo is one of the series of coastal towns on the road and railway routes north west of Bari - Molfetta, Trani, Bisceglie and Barletta are the others. It is much smaller than the other four (population 20,000), but its historic centre (Borgo Antico) is a gem, right beside an attractive fishing harbour and a lively central square.

A visit here can be as long or brief as you wish, the delights of Giovinazzo are very tightly packed together.

Historically, Giovinazzo has well established roots in Roman times and was fortified by the Emperor Trajan (Traiana) in 102 AD. It was among the first localities in Puglia to be converted to Christianity, with many churches in place before the end of the Roman empire. After various invasions and occupations, it was rebuilt by the Normans in the 11th century, who also built the Cattedrale. Economic decline followed under the Angioini (Angevins) in the 13th century, but things got better when the Aragonese took control in the 15th century. Subsequently it was owned by various noble families, in particular the Gonzagas, until it became part of the unified Italy in 1860.

Head for the Piazza Vittorio Emanuele. This is a large triangular open space in the heart of this small city, the focus of local events and activities, and with a wonderfully sculpted central fountain. On one side of the Piazza is the Chiesa San Domenico; along another side is a series of small bars; and along the third side is the edge of the small Borgo Antico with its  maze of streets and traditional buildings. The enormous Piazza was originally built in 1797 over an old sea inlet, to celebrate the arrival of King Federico IV from Naples and of his bride Maria Carolina. The Triton Fountain, the distinctive major feature of the Piazza, was constructed in 1933.

The Borgo Antico is very well preserved and maintained. There are the usual narrow streets, but what makes it especially attractive are the many small arches leading between the streets and tiny squares. There are various palazzi and churches.

Of particular note is the Palazzo Ducale built in 1657; this has an elegant facade and gateway, you can go into the central courtyard, the building itself is used for residences (and could benefit from some restoration). Of the churches, other than the Cattedrale, the most significant is La Chiesa del Spirito Santo, built at the end of the 14th century in typical late Romanesque style with stone cupolas.

There are quite a few places to eat in Giovinazzo, mainly traditional establishments open at lunchtime (from about 1pm) and in the evening. Not surprisingly fresh fish features a lot on menus and can be recommended.

Giovinazzo is easily reached by rail, it is on the main line about 20 minutes north of Bari, so about an hour and a quarter from Ostuni. Head straight ahead out of the station along a quiet avenue, Via Marconi; keep straight on at the large pink faced Chiesa Sant'Agostino, then walk through the middle of some attractive gardens (Villa Communale) and along a street opposite which brings you to the Piazza Vittorio Emmanuele - less than 10 minutes stroll from the station.