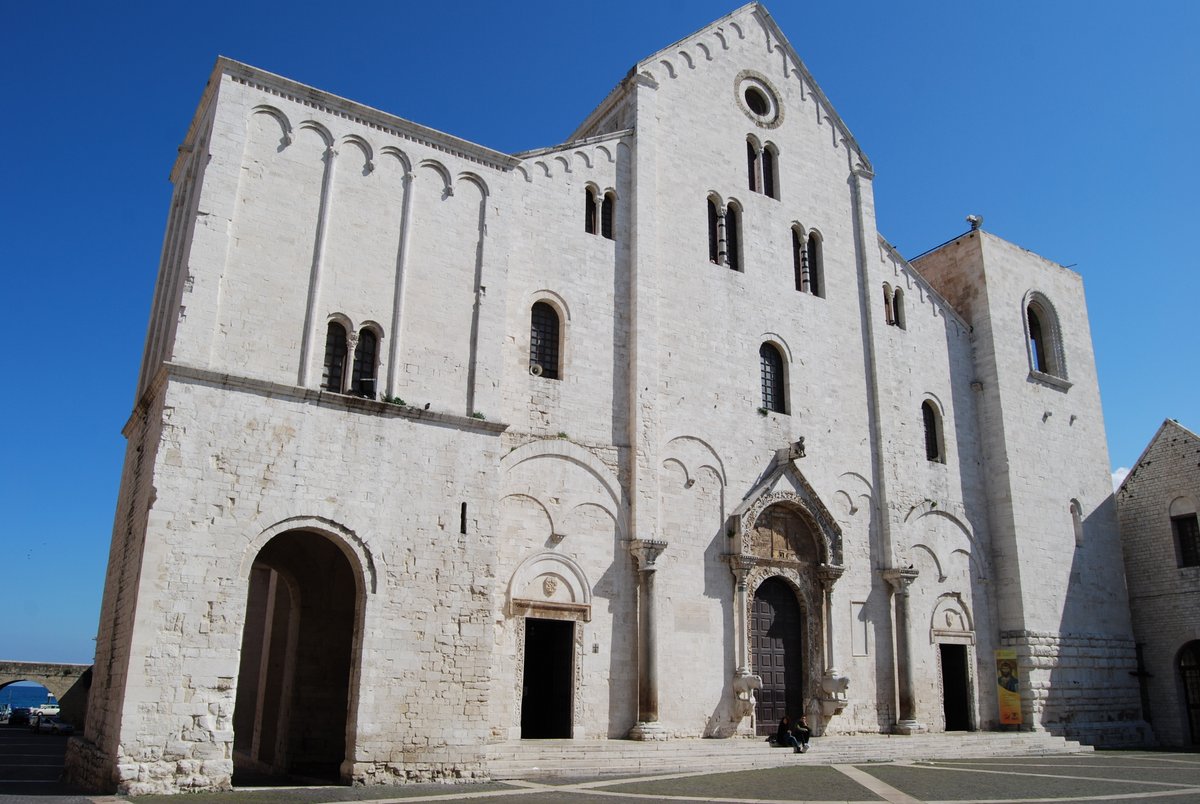 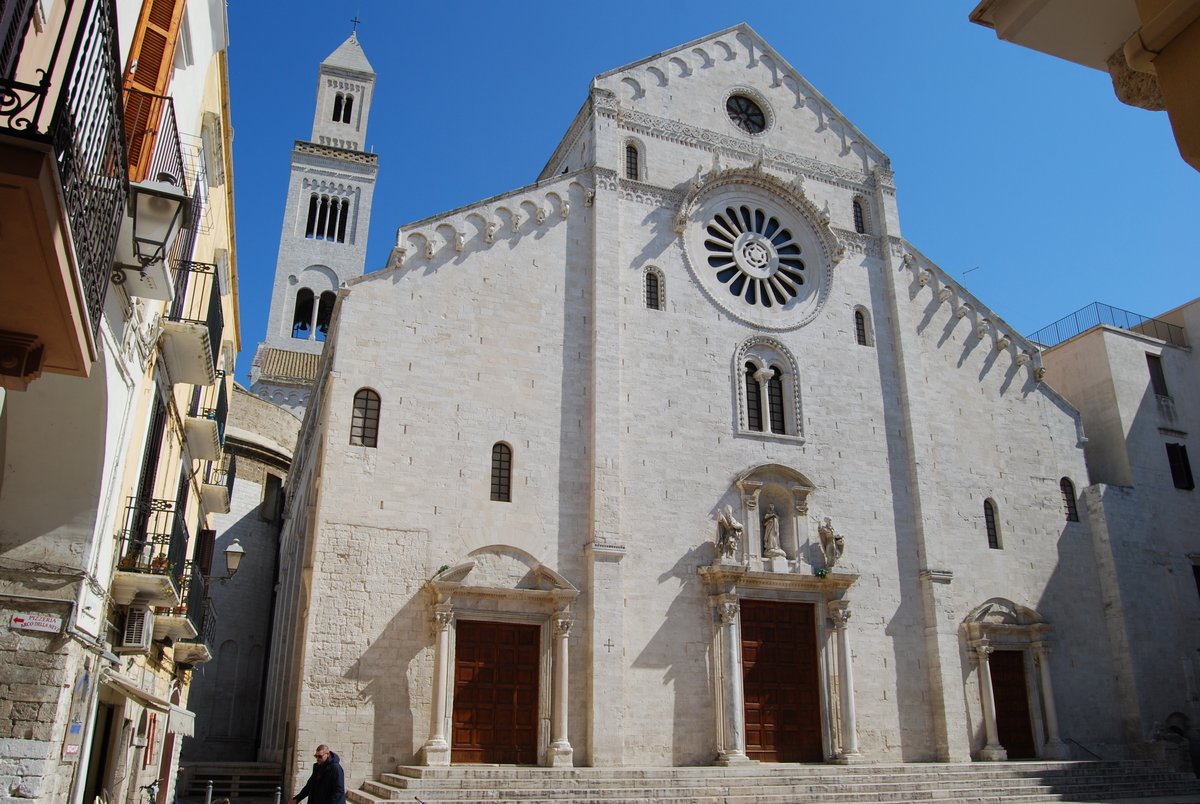 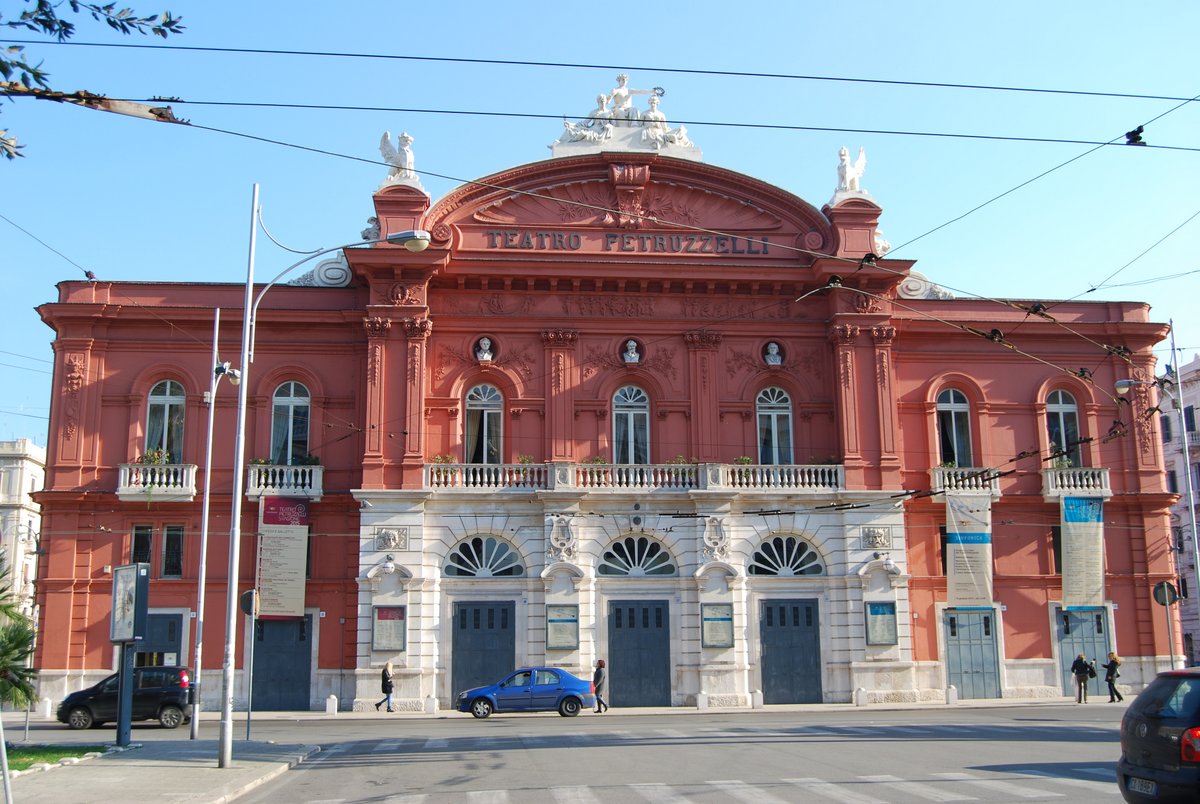 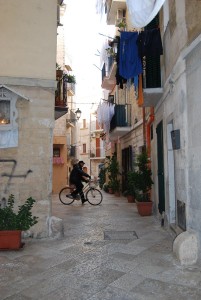 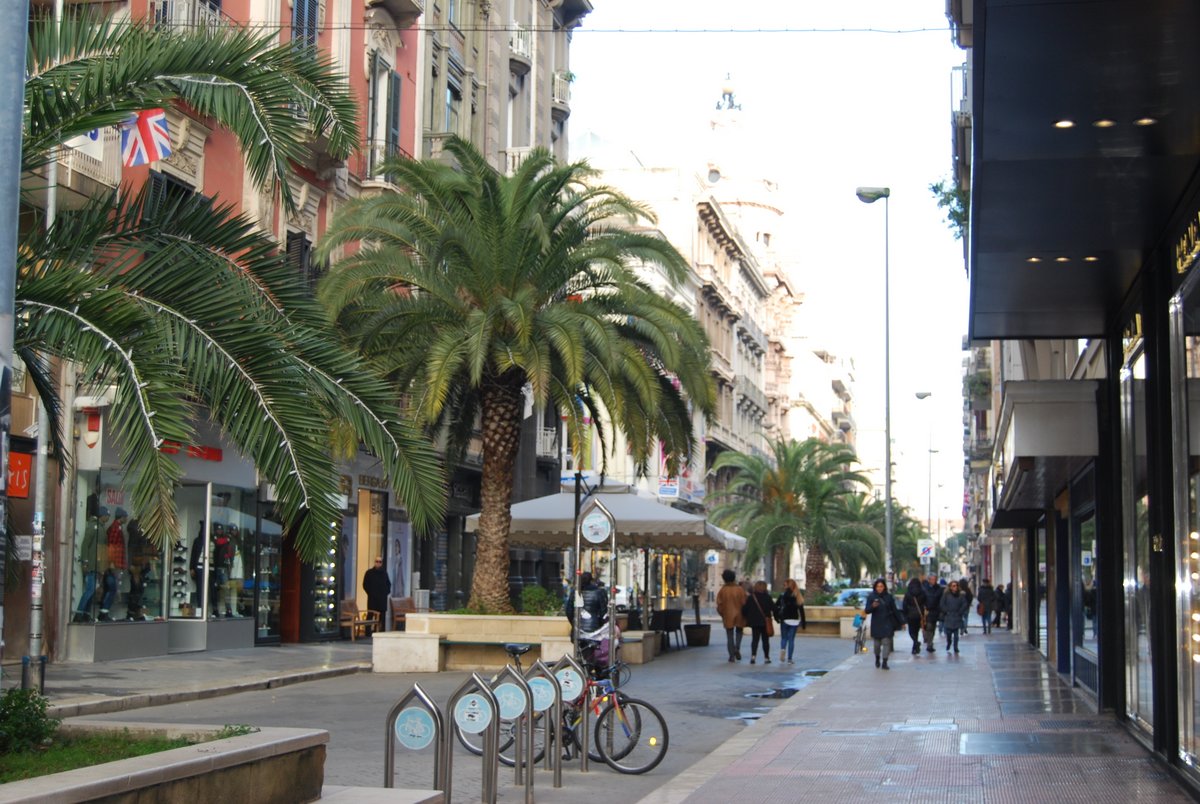 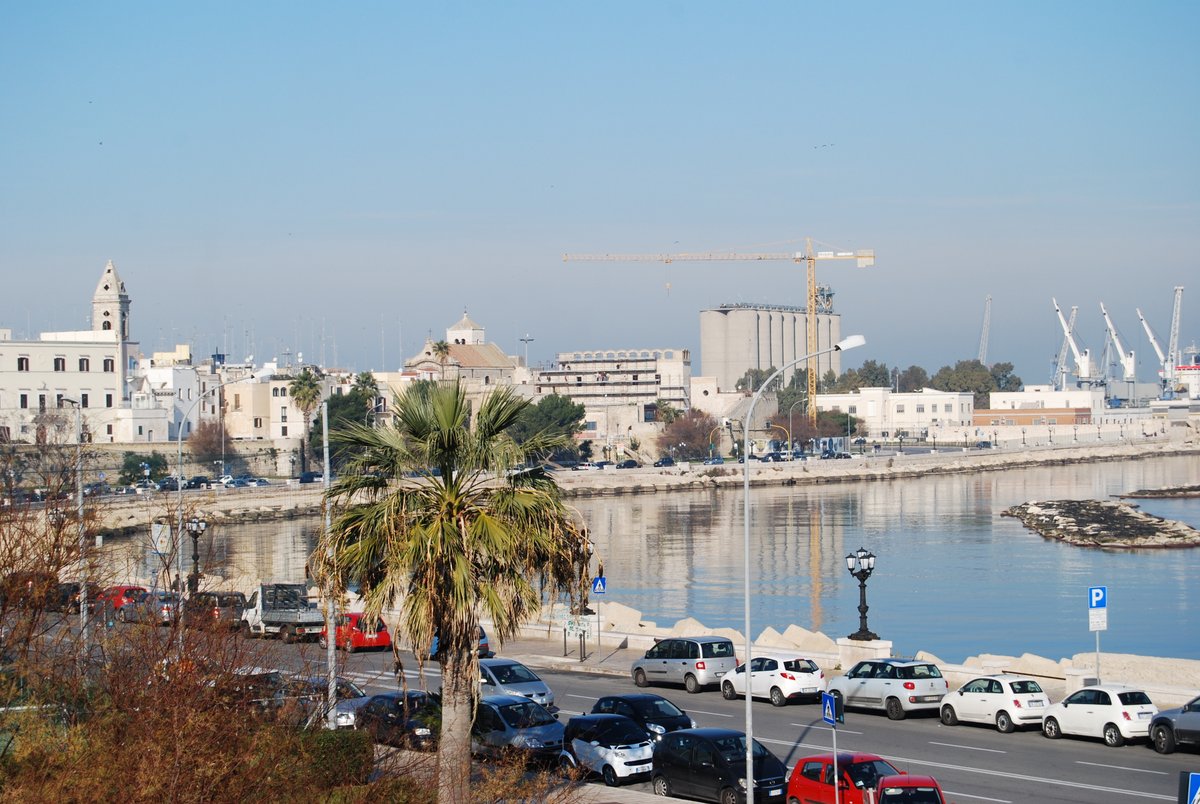 Bari (population about 325,000) is Puglia's largest city and the regional capital of Puglia. It is a  major port and industrial city; a key commercial, transport, cultural, educational, administrative and healthcare centre (Bari's San Paulo Hospital is one of the very largest in Europe). Its sprawl of drab buildings and generally unattractive environment give a very poor impression to the casual traveller.

Therefore its central area can be a massive surprise to the visitor who spends time here. The old city is well promoted for its character and history; adjoining it is one of the most gracious 19th century areas in Italy, with tree lined pedestrianised streets, high quality shops, up market hotels, interesting decorated facades, several famous theatres and other buildings of top quality architecture (including some of the best architecture from Italy's fascist period in the 1920's and 1930's). There is also a sea front road and walkway (lungomare) skirting the old and new parts of the city, reputedly the longest in Italy.

So we definitely recommend Bari as a place to visit, to stay in and enjoy. If you are based in Ostuni or indeed anywhere else in Puglia it is easy to reach by train. If you are travelling through Bari Airport, it is well worth spending some time in Bari itself. If you are interested in shopping as well as history and culture, then Bari is for you.

We have divided the information here into sections as there is a lot to see and do - so on a brief visit you should choose what is of most interest to you.

The general structure of the central area

The old city, Bari's main churches and the castello

The lungomare and Metropolitan Art gallery

The structure of Bari central area

The central area stretches for about a kilometre between Bari Centrale station and the sea. The area nearest the station is the elegant shopping and commercial area known as the Murattiano; this also contains a park, the University, the main hotels and theatres.

Between the Murattiano and the sea is the citta vecchia, a mediaeval core of narrow streets containing Baris's two main churches and also a museum; it is flanked by a waterfront square and former fishmarket on one side and by the Swabian Castle on the other.

South of these two districts, the lungomare runs alongside the seafront with a harbour and marinas. The first kilometre or so of this contains many imposing buildings; one of these is the Palazzo Provinciale which houses Bari's important art gallery.

The Murattino shopping and commercial district

This area stretches from immediately outside the station, separating the station from the citta vecchia.

Immediately outside the station is Piazza Aldo Moro - a busy area flanked by railway and bus termini and overlooked by modern hotel and office blocks. 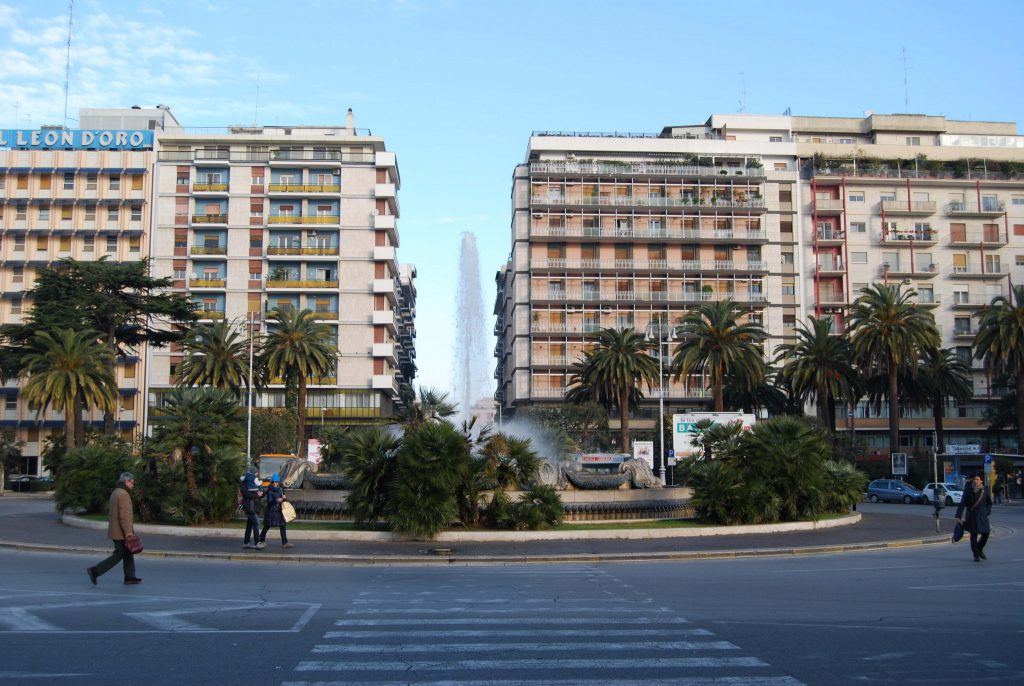 In the middle is an elaborate sculpted fountain, which is multi-coloured at night. However, this is surrounded by a roundabout, so you need to negotiate this first if you have arrived by train (NB the photograph was taken when there was a break in the traffic!). Then you go straight ahead, walk through some attractive gardens with fountains and children's play area (Piazza Umberto I). This brings you to you Via Sparano da Bari, an elegant, largely traffic free street full of designer shops and stores, and usually made lively by musicians, street performers etc. One notable shop is United Colors of Benetton, based in a traditional palazzo (Palazzo Mincuzzi) which was converted into a store many years ago. This has a truly impressive facade - but make sure you go inside, see the old lift (a new one was recently installed, although we think the old one still functions) and view the shop from upstairs. You might even be tempted to buy something, but not essential, they are used to sightseers). The streets running off and parallel to Via Sparano di Bari all have shops, bars, cafes and geleteria.

At the far end of one of the streets going to the right you will see the Teatro Petruzzell. This is Bari's main theatre, concert hall and opera hall; and the fourth largest in Italy. 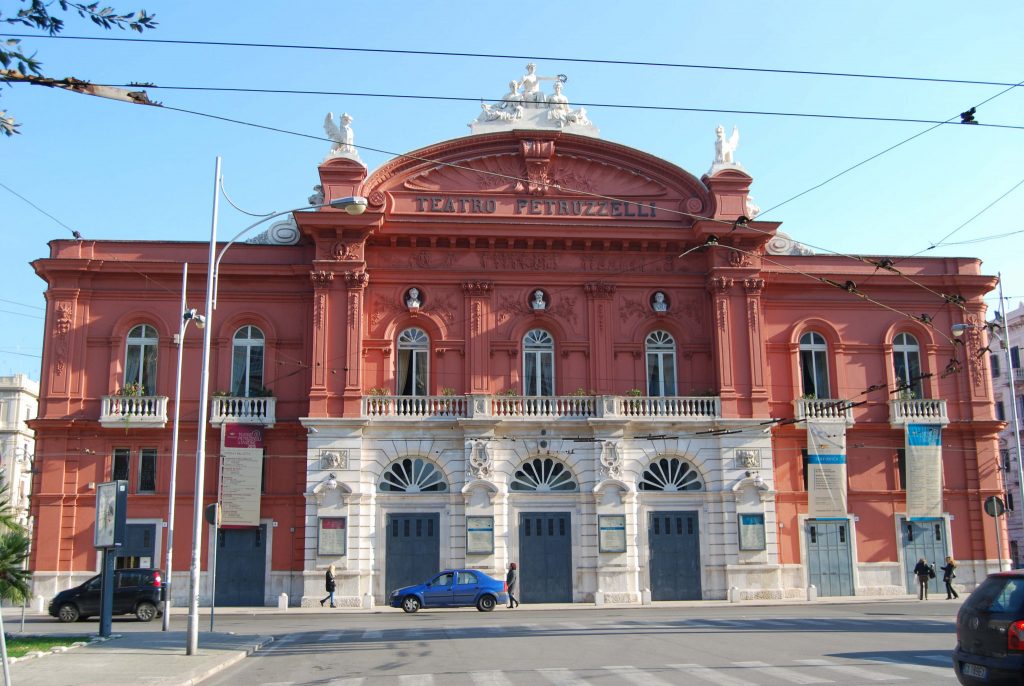 The Petruzzelli has an interesting but rather chequered history. It was built at the end of the 19th century due to popular demand for a larger theatre and a drive by the public authorities to promote public works to generate employment. The Bari City Council donated the land and held a competition to design and build suitable premises. This was won by the Petruzzelli family, shipbuilders from Trieste, designed by their Bari-based brother. It took fourteen years to reach agreement and then build the theatre, which opened in 1903 - it had a capacity of over 2000 (now reduced to about 1500 due to larger stage requirements and safety regulations). It staged concerts, operas, ballet, plays and spectacular shows, and numerous artists with national and international reputations appeared there. However, in October 1991, a massive fire (allegedly arson) destroyed the interior. It was uninsured by its private owners. An unsuccessful prosecution of the alleged arsonists and then a long period of litigation between the family owners, their negligent manager and the City Council (which wished to reclaim the theatre). Stalemate was eventually resolved when the theatre was restored by public money and its ownership handed over to a public trust overseen by the City Council. It reopened on 4 October 2009, 18 years after the fire. 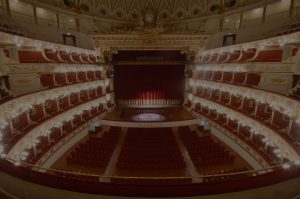 Despite some financial problems in 2014, the Petruzzelli has gradually reestablished its reputation as a major Italian opera and concert venue, and attracts artists of significant reputation.  It is an interesting and attractive building externally and internally, although without the expensive decor of some of Europe's most famous opera houses such as Milan, Vienna and London.

During the day, guided tours of the building are available - details of times etc are posted outside the booking office. However, there is no substitute for attending a performance, especially of an Italian opera. These are relatively inexpensive (maximum price is about 60 euros, and many seats are much less); tickets can be booked online. It is an interesting experience. To Italians going to the opera is a common experience, so although dressing up for the occasion is normal and appreciated, "smart casual" is quite usual. (NB If anyone wants more detail information about going to a performance at the Petruzzelli, contact us at Puglia Passion). 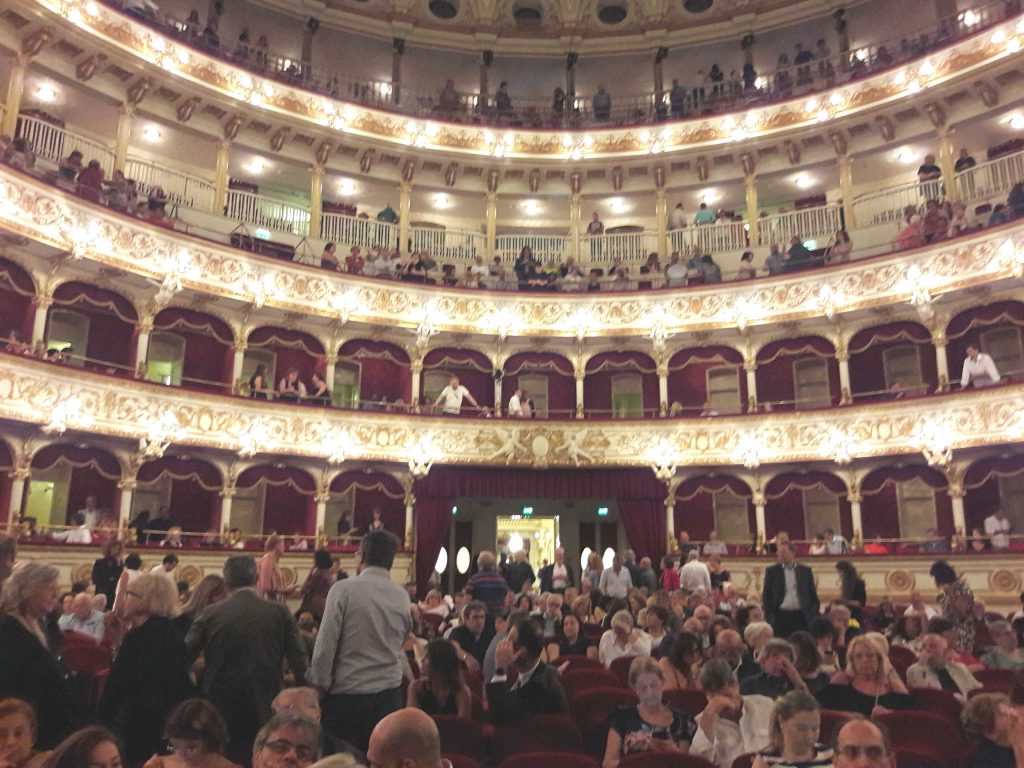 The elegant 19th century shopping streets are separated from the old city by the tree lined dual carriageway of Corso Vittorio Emmanuelle. On one side of this are a series of tasteful bars and restaurants. Beyond it lies the intricate series of streets of mediaeval Bari. This area has been cleaned up and revitalised significantly over the last 20 years, but it is still essentially a poor residential area; the shops, artisan workshops, bars and restaurants associated with tourism have made only a modest impact. Wandering through the maze of small streets and alleyways, with glimpses of small courtyards and the occasional garden, is the main attraction. There are important churches within the citta vecchia - Bari Cathedral and the Basilca di San Nicola. The Castello Svebo, another creation of Frederick II, is within the Old City - an impressive structure with huge walls, bastions and a moat. The inside can be visited for a charge, usually there is some kind of special exhibition. The lungomare and the Bari Art Gallery

The Old City adjoins a busy area next to the sea, with a harbour and fish market (the old fish market is being redeveloped as an exhibition centre). From there a busy road runs alongside the sea, flanked on one side by a pedestrian promenade, on the other by majestic buildings interspersed with gardens. The most prominent of these buildings, about 10 minutes walk from the Old City, is the Palazzo della Provincia, headquarters of the Bari Province.

This building accommodates Bari's main art gallery, the Pinacoteca Corrada Giaquinto, which is well worth a visit while in the city. It is not advertised very prominently. Go into the building from the main entrance on the lungomare - there is an imposing entrance hall (see photo) where there is sometimes a temporary exhibition, and a security office on your left. Walk straight ahead to a a tiny lift, go to the Fourth Floor, and there is the reception for an excellent and very varied gallery. It is open 9am-7pm Tuesday to Saturday. There is a charge of 3 euros, but it is free to under those under 18 and 65 or older, and free to everyone on the first Sunday of each month.

The gallery has a mixture of material, based on donations from local benefactors and the long established links between Puglia and the parts of Italy such as Naples and Venice which had well known artists. Many exhibits were originally in Puglian churches. So there are rooms devoted to Venetian and Neapolitan art, an extensive collection of 19th/20th century paintings, a major display of Puglian painting from 12th to the 18th century. 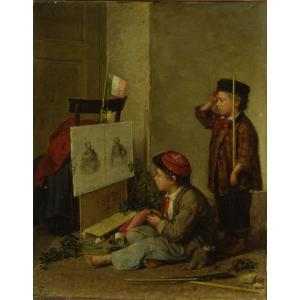 The most important work is probably a representation of St Peter by the Venetian artist Giovanni Bellini, painted round about 1500; this decorated monastic chapels in Monopoli until the suppression of the convents in 1870, when it was transferred to be looked after by the municipality of Bari. The gallery  usually hosts temporary exhibitions of artists connected to Puglia, and has an interesting approach to displaying these - not in a specific room, but interspersed with the permanent collections throughout the gallery. This generates a stimulating visitor experience. While the gallery can certainly be appreciated in an hour or two by the casual visitor, each room has available especially detailed and useful notes for those more especially interested in the various artistic categories and artists. The gallery also has a very good website with lots of detailed background for those who need it - CLICK HERE.

The main railway station is Bari Centrale. All the mainline trains stop here. It is served by direct services to and from Rome, Turin, Milan, Bologna and Venice. The station is very convenient for the city centre, and adjoining it are stations for smaller railway lines which are a feature of Puglia, including the important new link to Bari airport and the line to Matera. There is also a new direct express bus, Freccialink, between Bari Centrale and Matera; this stops in front of the station entrance.

You can leave luggage at the station at one end of Platform 1. Alternatively, there is an effcient privately operated left luggage locker facility in a building on the right hand side of Piazza Moro, almost next to the Bar Catullo - you pay  by the hour or day using a card.

The useful tourist information kiosk on Piazza Moro just outside the station seems to be closed permanently now, which is a pity. It has been overtaken by a new information office in the renovated fish market on Piazza Ferrari in the old port area - some distance from the station.

Bari Airport is the larger of Puglia's two international airports (the other is Brindisi). It is about 7km north of the city centre. A station on the local railway line system connects the airport with Piazza Aldo Moro; there are also local bus services and a direct bus link. Both bus and train take about 30 minutes.

You can travel around Bari by bus if you wish, just get tickets from a tabacchaio or edicola (newsagent). However, you can cover the central area most easily on foot. It is roughly 10 minutes direct walk between the station and the citta vecchia; and 10 minutes along the lungomare to the main art gallery.

There are plenty of places to eat and drink in Bari. For quality and value we suggest finding restaurants just outside the central area. However, the coffee/cake shops on and around Sparanno da Bari are excellent and not too pricey.