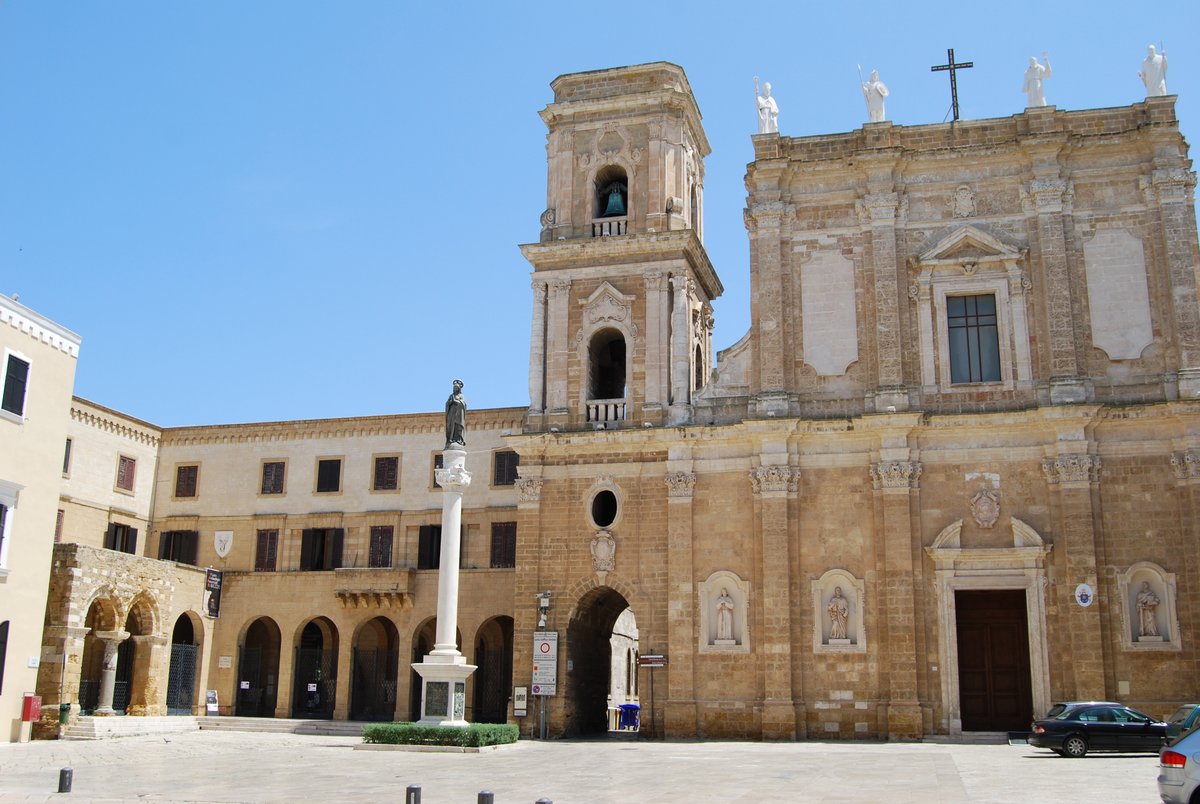 Brindisi (population 87,000) is one of Puglia's largest and most important towns. It is well worth a visit when in Puglia, although most of the thousands of people who pass through the airport never see the city itself.

An interesting waterfront, busy harbour, elegant tree lined streets and a string of historical sites provide an attractive and varied destination for a day or to stay. The public authorities have put a lot of effort into improving and promoting the city in the last five years - its streets and gardens are kept clean and well maintained, and there are plenty of maps displayed to assist visitors. We definitely recommend spending some time there while in Puglia. It tends to be quiet and slightly laid back, although if there is a cruise ship in port it can be busy for a few hours.

Brindisi has always been a crucial land/sea route link, a key jumping off spot between Europe and the Orient - for the Romans (the Appian Way ended here), the Crusaders, the silk trade, troops and now tourists on their way to Greece and Albania.

Although the city grew to prominence as a major port in the Roman Empire, it was founded by the Greeks, according to legend by the hero Diomedes, with the name ‘Brentesion’ which means ‘Deer’s Head’, referring to the shape of the natural harbour that has defined the city’s history. In parts of the harbour area there have been discoveries showing Bronze Age settlement; the harbour was used by the Mesappii for trading links to the Greeks and other peoples across the Adriatic. The great Roman road Via Appia terminated at Brindisi.

After the fall of the Roman Empire Brindisi was sacked by the Goths but re-emerged under Byzantine rule, which continued until the invasion of the Normans in the 11th Century. In the 13th Century Frederick II had a significant influence on the city, before the Angevins, Aragonese, Venetians, Spanish, Austrians and Bourbons ruled the city. It was heavily bombed by Allied forces in the Second World war. In the wake of the Italian Government’s armistice with the Allied Forces, Brindisi officially became the capital of Italy from September 1943 until February 1944, when the King of Italy, Vittorio Emanuele III and his wife settled here after fleeing Rome in fear of repercussions from the German army there.

The city has two castles: the Castello Alfonsino, or ‘di Mare’, built by the Aragonese in 1445 as a military base on an island which can be seen from the waterfront; and Castello Svevo, or ‘di Terra’, built by Frederick II as a fortified residence. Castello Svevo had its defences expanded over the years with the addition of cylindrical towers, before being used as a prison in the 1800s and subsequently as a naval base (this is still its main use although group tours can be arranged by appointment) - it dominates one end of the waterfront, and usually has one or two warships anchored alongside.

You can have an interesting and varied tour of the central area, ancient and modern, in a short time.

Try walking from the station along Corso Umberto, right opposite the entrance, passing a fountain in Piazza Cairoli before joining Corso Garibaldi which takes you directly to the waterfront. This is a pleasant 10 minute walk under trees, the streets have wide pavements with only restricted access for vehicles, lined with quality shops, bars and restaurants.

The old port area is reached at Piazza Vittorio Emanuele. Large passenger ships no longer dock here, they use the new port area a short distance away; but the terminal buildings are there, with coaches carrying people embarking/disembarking. However, occasionally significantly sized cargo and passenger ships do pull into this part of the waterfront, which is quite exciting to watch.

The main section of the waterfront, Viale Regina Margherita, overlooks the inner harbour, now largely a marina. You can see the Castello Alfonsino outside the harbour area, and also look across to the war memorial for Italian sailors built in 1933; this has a viewing area at the top. If you want to get to the far side of the harbour, there is a little ferry which will take you - details of this are given below.

The key site to visit on the waterfront is the flight of steps (la Scalinata Virgilio) leading up to the two Roman columns,  which reputedly marked the end of the 350 mile Appian way from Rome. Only one remains complete. The other fell into ruin and was given (among much controversy, which still lingers!) to Lecce as a present in appreciation of its Bishop Oronzo for saving Brindisi from the plague - it can be seen in Piazza Sant' Oronzo in Lecce. Near the steps the poet Virgil died in 19AD, so Virgil is indelibly associated with Brindisi..

The other key waterfront site is Betty ristorante, pizzeria, caffe, pasticceria, geletaria, bar etc, which seems to have taken over the whole middle section of Via Regina Margherita. A great spot for a stop, reasonable food and drink, and as likely as not some live music. (There are better and cheaper options for food and drink available away from the waterfront however).

At the far end of the waterfront is the Castello Svevo, which is inaccessible to visitors (except for specifically arranged tours) because of its military function. Warships are normally anchored just below it. 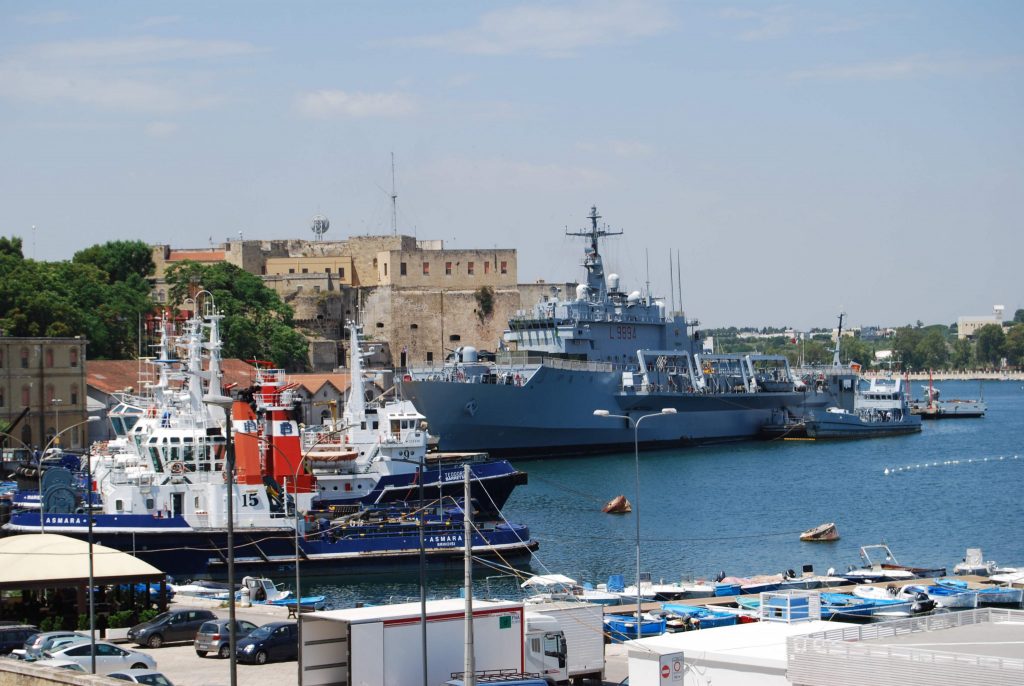 You can leave the waterfront and go into the centro storico before reaching the castle, by ascending some steps to a large war memorial, which is an excellent viewpoint across the harbour area. 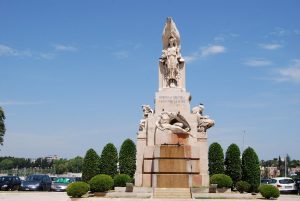 The monument is at one end of an attractive piazza named after the church on one side, the Chiesa di Santa Teresa. This beautiful baroque church was built in 1670, in a relatively restrained style, as part of a convent. However, the convent order was abolished in 1807, the church subsequently used for military purposes. It was renovated in 1980, and now incorporates the Diocesan Museum. Inside there are various altars and paintings from the 16th and 17th centuries. Alongside the church is a cloisters, also being restored, which house various public offices. 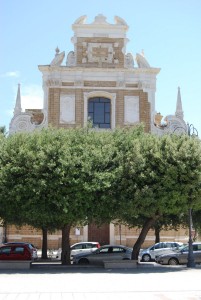 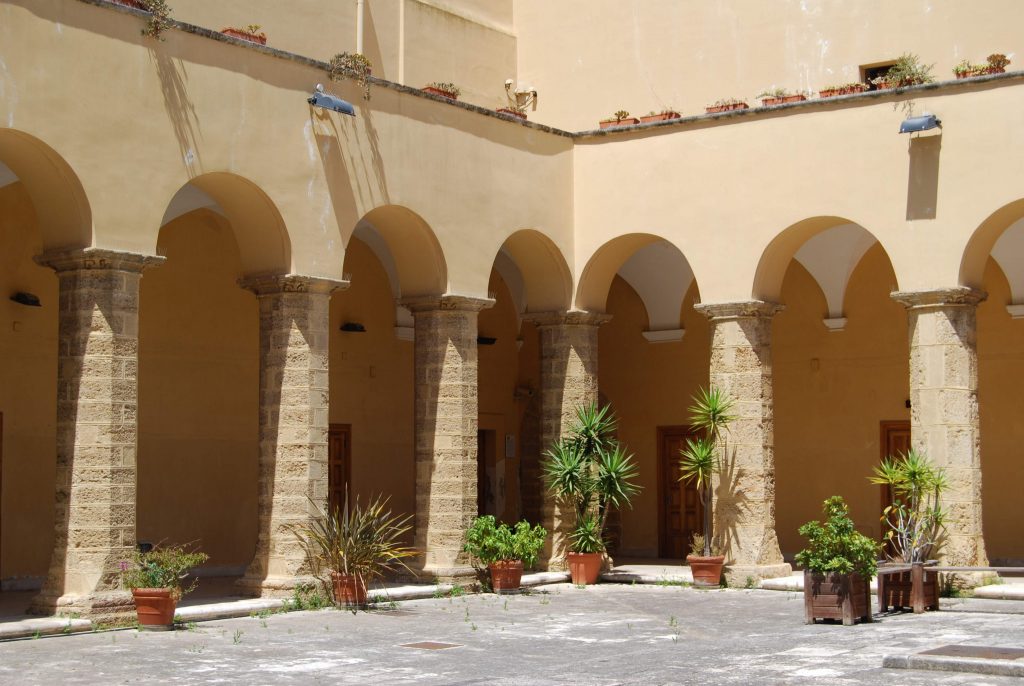 Nearby is the city’s cathedral which dates back to the 11th Century, although the majority of what is visible today is of 18th Century construction after an earthquake which destroyed much of the previous building. There remain some of the original mosaic flooring and a handful of naves. The cathedral contains displays of many of the important events occurring in the city over the centuries, from Crusaders departing to the Holy Land, the crowning of Ruggero as King of Sicily and Frederick II’s marriage to Isabella of Brienne.

On Via Tarantini, off the Piazza Duomo, is the Loggia of Palazzo Balsamo, a balcony on corbels carved with various features. This dates from the 14th century.

Make sure you do not miss theTempio di San Giovanni al Sepolcro, tucked away down a side street. This is a an ancient baptistry with unusual frescoes. 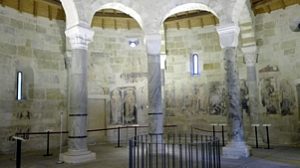 Between the old town and Corso Garibaldi, a large modern building is the Teatro Verdi, Brindisi's main concert venue. This was constructed in the San Pietro degli Schiavoni district on top of extensive uncovered remains of the Roman city, now preserved in a dimly lit basement surrounded by a walkway and explanatory boards.

An interesting minor excursion in Brindisi, especially on a clear day, is to take the small ferry boat across the harbour and go to the top of the Monument to Sailors of Italy. This monument is made of concrete, over 50 metres high, shaped like a ship's rudder. It was inaugurated in 1933, to commemorate the 6000 Italian sailors who died in period from the Unification of Italy until 1933, mainly during World War One. 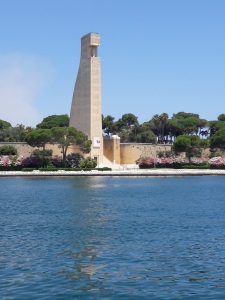 The ferry is part of the normal local transport service. It circulates frequently around two stops on the main waterfront and two on the far side, one of which is near the Monument. You can purchase tickets for a single trip on board, from a machine, cost 1 euro - although ordinary local bus tickets are OK as well - as usual you have to validate the tickets in a machine. 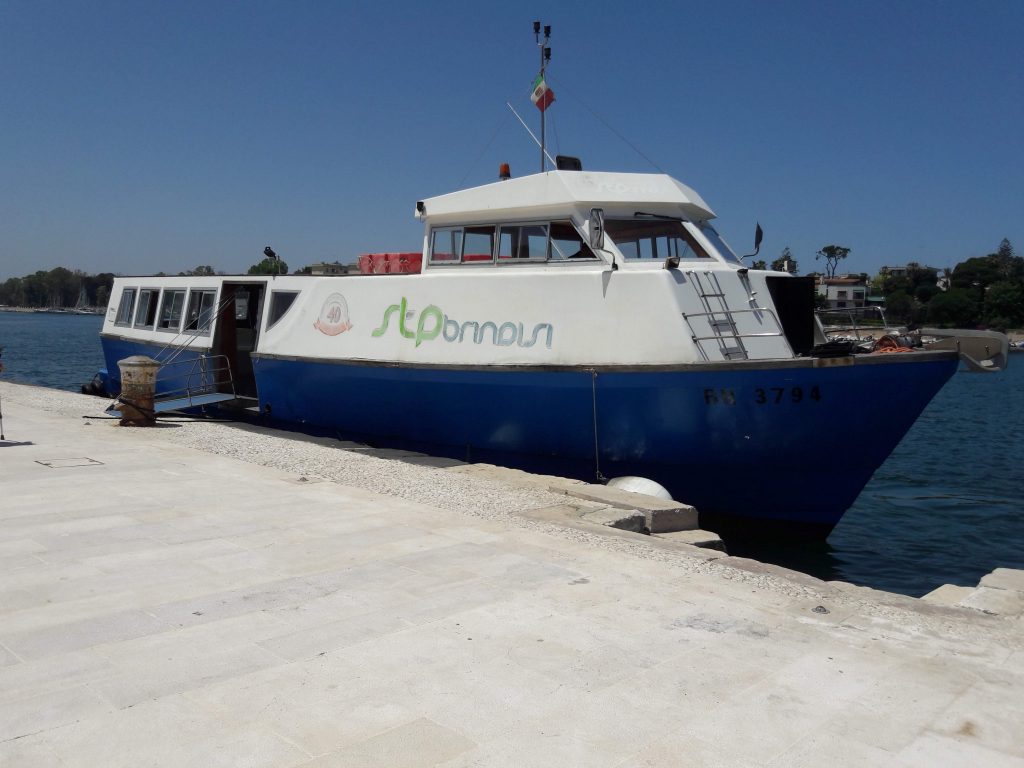 The crossing takes about five minutes. You can then walk to the bottom of the Monument. Entry is free although you have to leave a document as security. An elevator goes most of the way to the top although there are still quite a few stairs on an impressive internal spiral staircase. 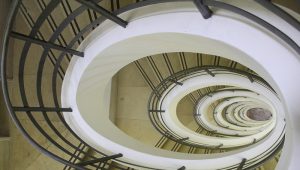 The view from the top is extensive - the monument overlooks an attractive park, and the wider panorama includes the airport, the old harbour with warships moored next to the castle, the surprisingly large modern port of Brindisi, and the coastline to north and south. 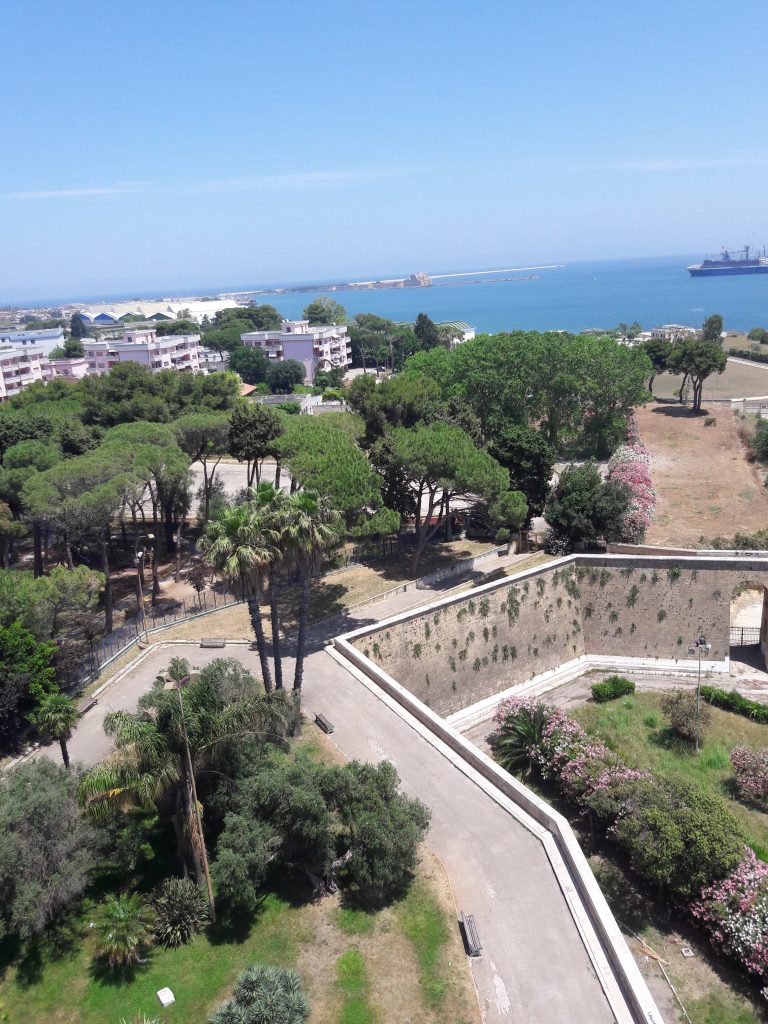 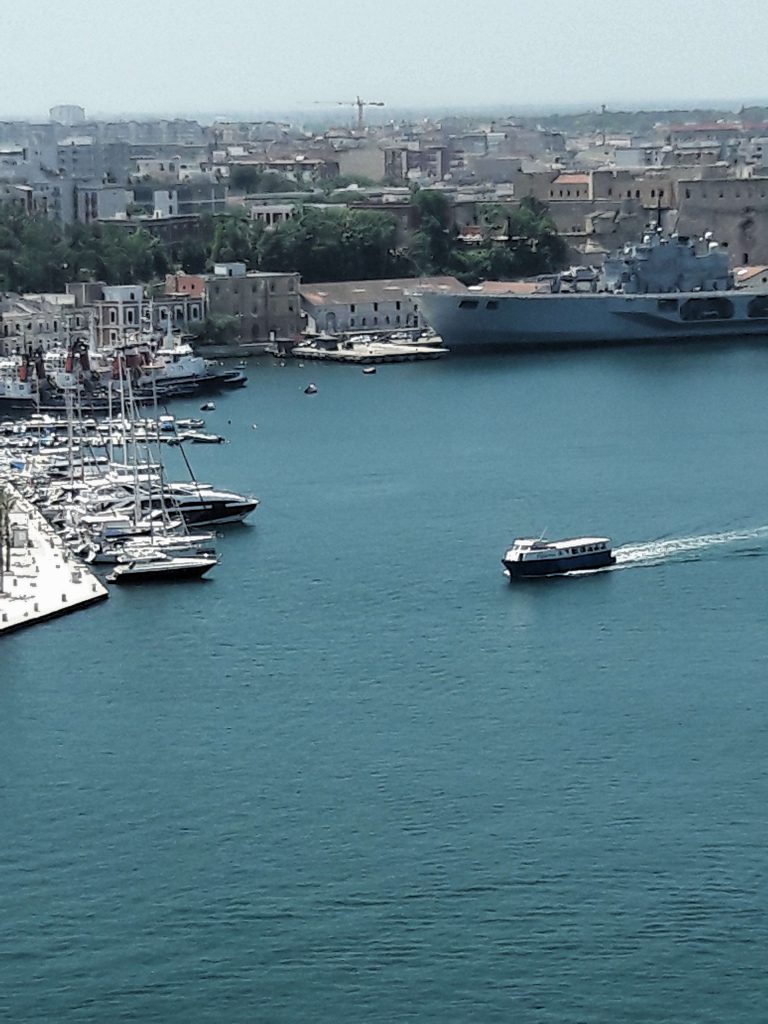