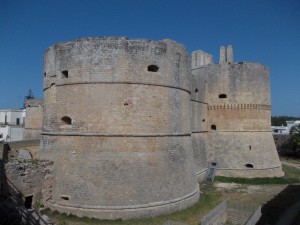 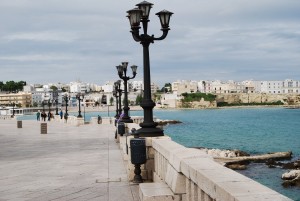 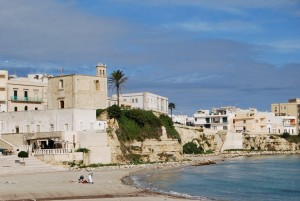 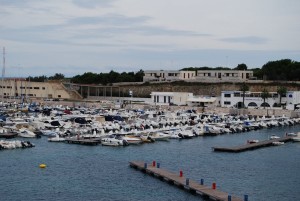 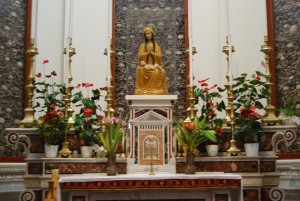 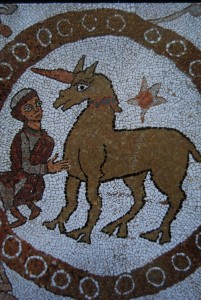 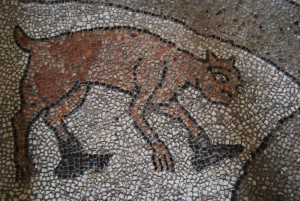 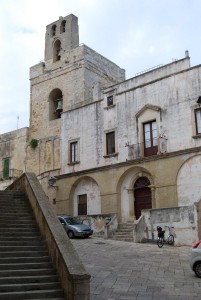 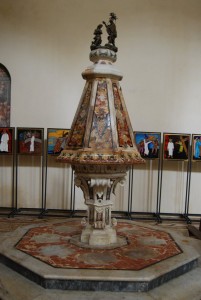 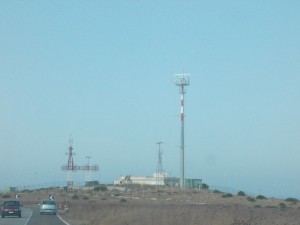 To the south and east of Lecce is the town of Otranto; Part of Otranto is essentially a holiday resort, but the separate and distinctive walled city is a major attraction in Puglia. In July and August it is very popular among Italian holiday makers and gets extremely crowded - but out of season this is a great place to go, and the mosaic floor of the cathedral is a "must see".

Otranto is about an hour and a half drive from Ostuni; you will need to park in the resort area, there are car parks near the railway station. It is also easy to reach by train using the Ferrovaria Sud Est from Lecce - go to Maglie and change onto the charming shuttle service to Otranto, there are trains roughly every half hour, and it takes about an hour altogether from Lecce.

From Otranto station walk straight ahead to a roundabout, cross the main road there and walk down a little street behind the fruit shop on the corner, then turn left to reach the seafront (about five minutes from the station), from where you will see the old city on your right (another couple of minutes walk).

Otranto has Greek origins, previously being named Hydrus. Post Roman history witnessed the town remain in Byzantine ownership, and was one of the last settlements to withstand the Norman invasion of southern Italy, until it succumbed to Richard Guiscard in 1068. The city was heavily involved in the wars between Italian kingdoms and the Turks in the late 15th and early 16th century, and suffered from attacks from the Turks until 1644. For centuries it was one of Europe's key bastions against the incursions of the Ottoman empire, which had a major impact on Otranto's development.
The old town is largely enclosed by old walls, now built up, some of them along the side of the port area. From the resort area to the north, you enter the old city by crossing over the small river Idro (from which Otranto gets its original name),  then across a pleasant little garden area, and  through the massive arches of the double gateway Porta Alfonsina.

Within the old town, there is the familiar maze of narrow streets and small squares, but it is smaller and less difficult to find your way around than many similar places. The streets also open out onto larger spaces beside the sea and around the castle.

In the heart of the narrow streets is the Romanesque Cattedrale d'Annunziata, built in the 11th century and extended/decorated especially in the early 16th century (a splendid rose window with 16 rays).

Make sure you go inside the Cattedrale to see the amazing mosaic reputed to be the largest in Europe. It was made in 1163-1165, and covers the whole floor of the cathedral. Based on a 'Tree of Life' it portrays the path from sin to salvation, with  scenes from the Bible, various mediaeval myths etc.

Preserved in the cathedral are the skulls and bones of the 800 Martyrs of Otranto who were beheaded by the Turks in 1480 for refusing to convert to Islam. The atmospheric crypt is also well worth visiting (it can be entered from inside the cathedral or directly from street level), dark and cool, multiple columns and frescoed walls. Note the cathedral is closed to visitors from noon until 3.00pm.

Piazza del Popolo is a small square in the heart of the old town. Just off this square, up a small flight of steps, is the Chiesa di San Pietro, a tiny Byzantine church dating back to the 9th century. If you are lucky enough to find it open, go onside and see the precious frescoes.

The imposing Castello Aragonese was built by Federick II of Swabia in 1226 and subsequently modified by the Aragonese (15th Century) and Emperor Carlo V  (16th Century). It is of an unusual five-sided design, with three significant towers and a large moat crossed by a drawbridge.  You get good views of the massive fortification from the outside, there is a large open area in front of it, Piazza Castello. It is open to the public every day (closed 1.00-3.00pm). The cost is 5 euros, but if you keep the tickets they qualify for you for a 1 euro discount at Gallipoli castle.

Although there are good views from the ramparts over the town and out to sea, the inside of the castle is mainly used for temporary art exhibitions, and the entry fee is quite high because of this - on balance we would not think it worth paying to look around inside the castle unless you have a specific  interest in the art works on display. One permanent display in the castle relates to the author Horace Walpole, author in 1764 of the famous novel" which he entitled "The Castle of Otranto", regarded as the first "Gothic" novel. Although his fictional castle bears little resemblance to the reality, the display is remarkably comprehensive and makes the most of the connection with Walpole.

There are ample opportunities for eating and drinking in Otranto, even out of the summer season, especially if you like seafood.  Around the edge of the old town are promenades and larger squares, many overlooking the port/marina, with bars and restaurants. There are also lots of bars, cafes and restaurants around the town, particularly near the beaches. Otranto is at the narrowest part of the Adriatic, so Albania can often be seen, only 43km away.

There a two main beaches at Otranto, which are very popular in the summer months. Surrounding the old town spreading over the hilly areas are many modern hotels which have given the town a year round resort feel, very much in contrast to the towns of the Salento further inland.

South from Otranto, 5km along the coast, is the lighthouse of Faro della Palascia, the most easterly point in the Italian peninsula. This is not worth a visit, it is a very disappointing 'modern' lighthouse!.