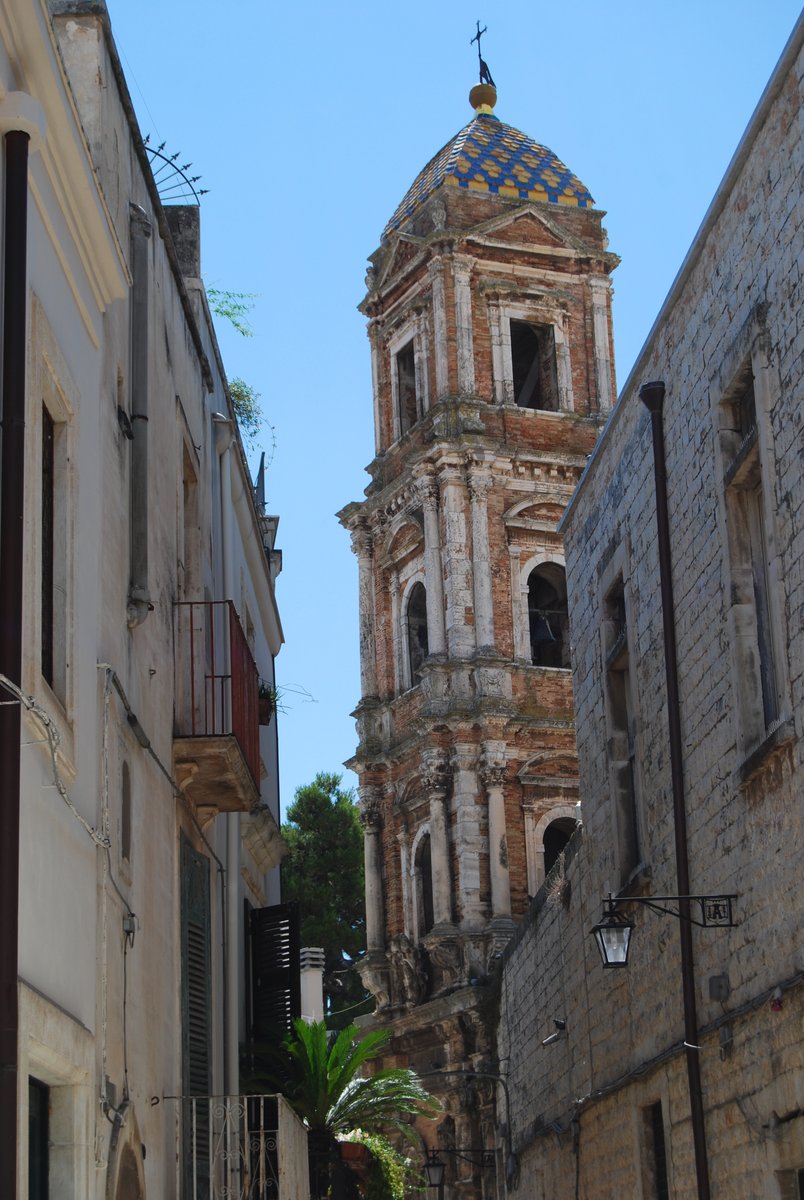 About 30km south west of Bari, Conversano is  pleasant place to visit, and might make a convenient stop if driving to or from Bari Airport. It is easy to reach by rail - the Ferrovie Sud Est Bari/Martina Franca line stops at Conversano, it takes about 30 minutes from Bari Centrale, and the station is a couple of minutes walk from the Piazza Castello - just head along a short tree lined street almost opposite the station entrance, cross a main road and you are there.

Conversano is located on the site of an ancient Iron Age settlement called Norba, meaning ‘city surrounded by defensive walls’. Despite becoming a bustling trade centre, the settlement was abandoned around the time of the Visigoth invasion of the Italian peninsula in the 5th Century. The more recent town of Conversano regained its prominence under Norman control and was the capital of an area under the Count of Conversano that stretched as far as Lecce. In the 15th Century Conversano was inherited by the Acquaviva family, who gave their name to the castle.

The historic centre of Conversano is in three distinct parts, which were all in the past walled with guarded gateways, some of which still exist. The oldest district contains the three main historic buildings - the Castello, the Cattedrale and the San Benedetto convent. There are useful maps of the town at key points so finding your way around is not difficult.

The Castello degli Acquaviva is an imposing fortress structure, and houses a museum/art gallery with significant work of local artists - it is open except on Mondays, 9am-1pm, 4pm-8pm; cost 3 euros ( which also covers the Museo Archeologico in the San Benedetto monastery nearby). One of the better known of the Acquaviva earls to rule Conversano was Giangirola, nicknamed ‘The Squinter’ due to his inability to see through one eye. He turned the town into a centre of art and culture, sponsoring architectural projects and purchasing many famous 16th Century artworks, including those by Paolo Finoglio inspired by the poem ‘Gerusalemme Liberata’ by Torquato Tasso. These are on display in the museum of the Castello.

Next to the Castello is a large Piazza, with views across the plain below to the Adriatic, about 7km away. This gives access to the Villa Garibaldi, a beautiful small park with a precious shade of trees. Leading out of the Piazza Castello is Via Porta Antica della Citta, a narrow street between the ancient gates of this oldest of the three districts. This whole area comes alive in the evening.

Just beyond Piazza Castello is the Romanesque Cattedrale dedicated to Madonna dell’Assunta. Started by the Normans in the 11th and 12th Centuries, it has been enlarged and modified over the centuries. In 1911 a fire destroyed almost the whole interior, except for the wooden Crucifix situated in the right aisle and the Holy Icon of “Madonna della Fonte”, patroness of Conversano, situated in the left aisle.

Also adjacent is the San Benedetto monastery with its tall multi coloured domed tower. The Benedictine monks were replaced by Cistercian nuns in 13th Century and it became a convent. Symbolically, the bell tower reaches higher than that of the Cathedral, intending to represent the dominance of the nuns over the bishop. You can wander through some of the monastery buildings,  they also contain an archaeological museum. Currently part of the site is being renovated.

Conversano is the traditional Puglian home of cherries. Every June they celebrate the Festa delle Ciliegie, the Festival of Cherries, where local producers set up countless stalls to display all varieties of the town’s most famous product.  Generally Conversano is a refined, elegant city, well off the tourist track.