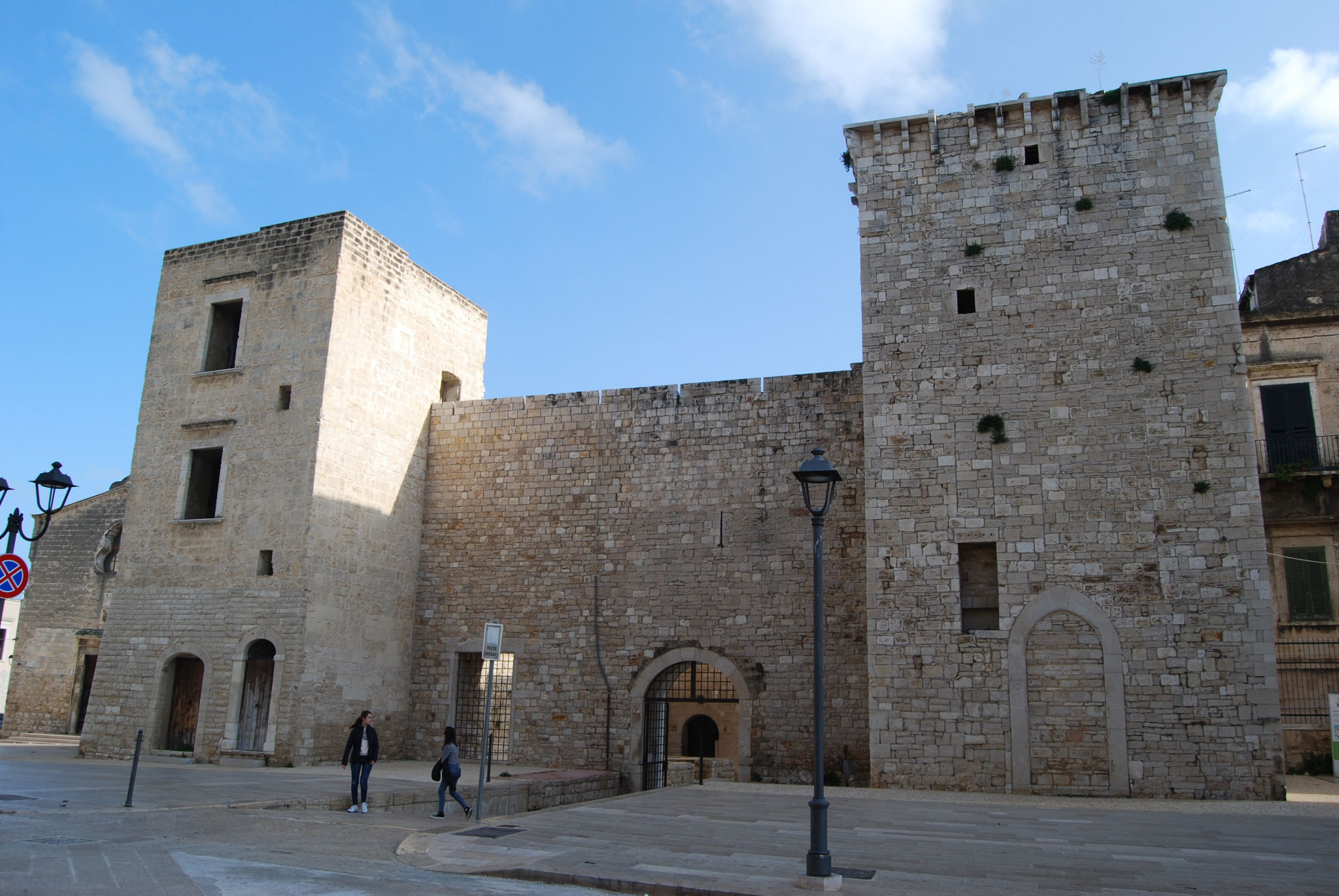 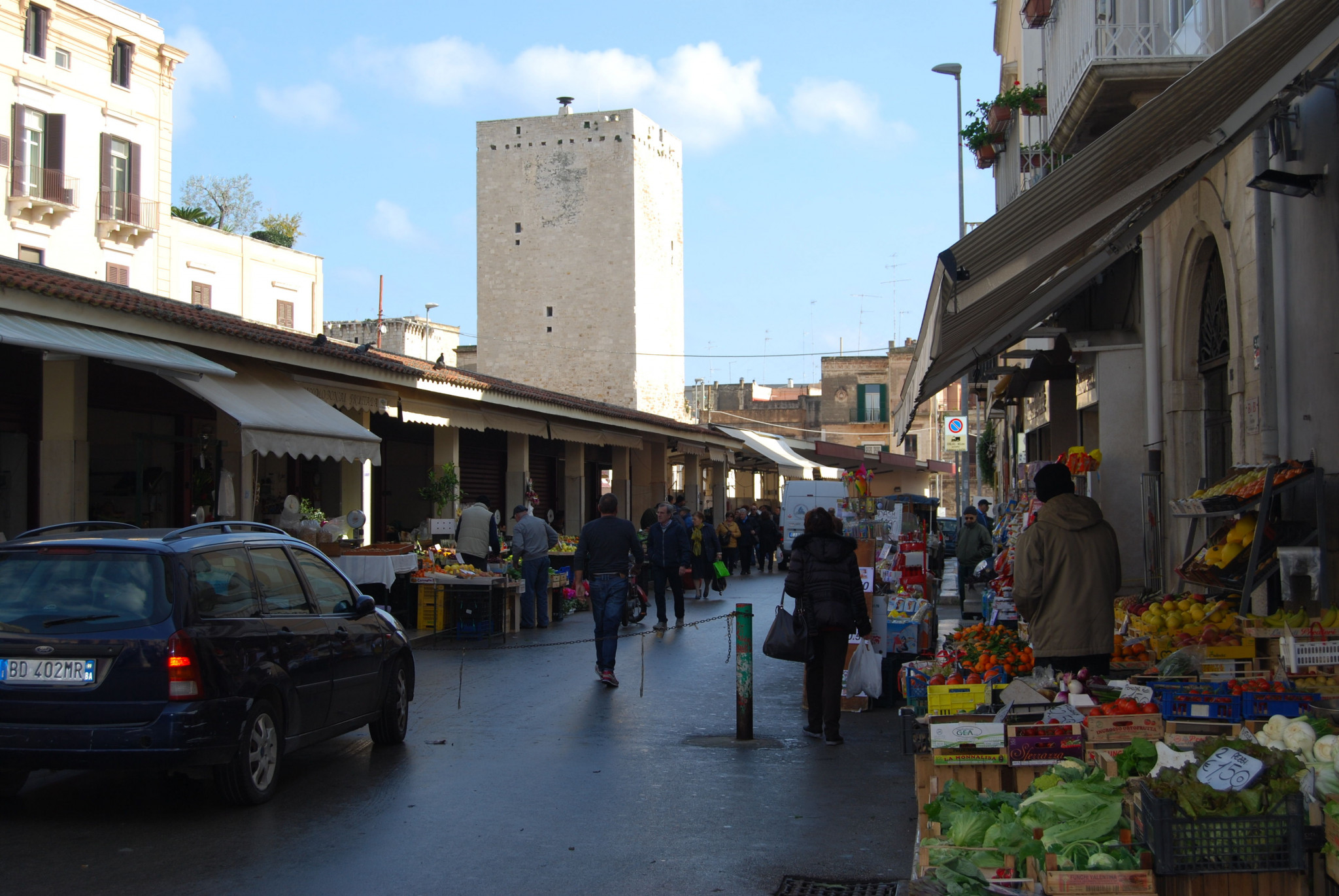 Biscelgie is one of the series of coastal towns on the road and railway routes north west of Bari – Giovinezza, Molfetta, Trani and Barletta are the others. It is probably the least interesting of these to visit, although it is easily accessible by road and by rail. The central area is pleasant enough, but it is rather disappointingly cut off from the harbour/marina by a raised roadway, a total contrast with Trani.  A major redevelopment scheme is proposed for the harbour area, but it seems unlikely to integrate it into the rest of the old centre.
However, Biscelglie is traditionally the most important fishing port in this area, particularly sardines, mackerel, anchovies and cod. At the heart of the town is a thriving fish and fruit/vegetable market. This unusually operates every day of the week (Sundays included), mornings only, and is well worth a visit.
Close to the market is the Castello Svevo with its own small piazza in front. The castle itself is also small, and has been renovated to contain municipal offices and a museum (open in the evenings). You can walk through the gateway into the courtyard but there is not much more to see.
Between the Castllo and the market is what is probably Biseglie’s most interesting building, the Torre Maestra, This is a Norman tower, built for defensive purposes, 27 metres high. It is called the Torre Maestra (“Guide Tower”) because it served as a marker for seafarers. In the Second World War an air raid siren was installed at the top. This still sounds at 8.00am and at 12.00 noon as a time signal. The Torre is sometimes open to the public, there is a small museum inside.
The Cattedrale di San Pietro is in the middle of the old centre, but does not have any imposing piazza in front of it, so it is especially difficult to appreciate it from the outside. Built in the Romanesque style in 11-13th centuries, it has been very well preserved, including some recent efforts to restore the original features which had been obscured by elaborate Baroque style decorations. Opening hours are limited – 5.00-7.30pm daily, plus 9.00am-12.30pm on Sundays and holidays – sometimes a Sacristan will give a guided tour. The facade has a large Baroque window which replaced the original ceiling rose. Internally there are three naves with galleries, and beautiful wooden choir stalls. In the crypt are tombs of local rich families and a chapel containing relics of Bisceglie’s three patron saints - Mauro, Sergio and Pantaleone.

Located in the Santa Croce convent is the Museo Civico del Mare, displaying various exhibitions with a nautical theme, including reproductions of Admiral Nelson's ship the Victory.

There are plenty of parking places, and if arriving by train just walk straight ahead from the station down Via Aldo Moro, which leads after five minutes to the large open space Piazza Vittorio Emanuele and beyond this into the older central area. There are two Tourist Information Offices there, and a map is useful as the street pattern can be quite confusing. Not many places to eat and drink in the old centre except around the market, but several options on Via Aldo Moro. For the sweet tooth, Bisceglie boasts a delicacy known as 'sospiri' – a speciality sponge cake with cream.