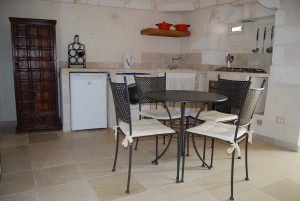 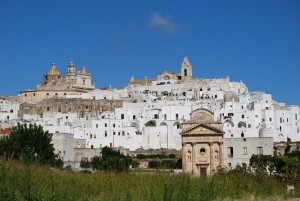 
Check us out on TripAdvisor too!

Check us out on TripAdvisor too!

Check out reviews for Casa Nonna on

At the very centre of Ostuni's mediaeval quarter, an apartment of traditional character with all modern amenities; street and sea views; free broadband internet; central heating and air conditioning - the perfect base for holidays in all seasons.

The Centro Storico (historical centre) of Ostuni is known throughout Italy as La Citta Bianca because of its unique whitewashed buildings (a tradition maintained since the 17th century when the lime whitewash helped fend off a plague epidemic) cascading down from the hilltop cathedral in a maze of narrow streets and stairways, most of them car free. Casa Nonna is an apartment of ancient character deep inside the Centro Storico, half way between Piazza della Liberta (Ostuni's main central piazza) and the beautiful cathedral. There are relatively few apartments to rent year round in this special part of the city (a lot of Ostuni accommodation is outside the historic centre, in what is usually referred to as the 18th century quarter; Casa Nonna is right inside the mediaeval core with its unique "Moorish" feel).

The apartment consists of three rooms on the first floor of a building accessed from a narrow street off Via Cattedrale, the Centro Storico's main street and passagiato. It has been restored to a high standard in recent years, with the cream coloured tufa stonework and the domed, star shaped ceilings. A kitchen/dining room (with gas hob, fan assisted electric oven and grill, double sink, fridge, washing machine and table/chairs) has a window overlooking the lively little street. A sitting room (with double sofa bed and television) and the bedroom (large double bed) have windows looking out on lower parts of the old city and across Puglia's coastal olive grove belt to the shimmering Adriatic Sea. The shower room contains a shower, WC and wash basin. A roof terrace with panoramic views out to the sea is reached by a staircase from the sitting room.

The apartment has gas fired central heating, so is extremely cosy in Puglia's cooler months. An air conditioning unit and fan are useful in the height of summer. But the thick stone walls make the apartment cool in summer and warm in winter. Double glazing and specially insulated doors protect the apartment from outside noise, the bedroom and sitting room especially. High speed broadband internet / Wi-Fi access is constantly available for no extra charge for guests who want to keep in touch by internet and email.

The apartment can accommodate two people very comfortably. However, the sofa bed converts quickly into a high quality double bed, so it is possible to accommodate up to four people.

*Total tax is based on €1 per person per night, up to a maximum of 5 nights.